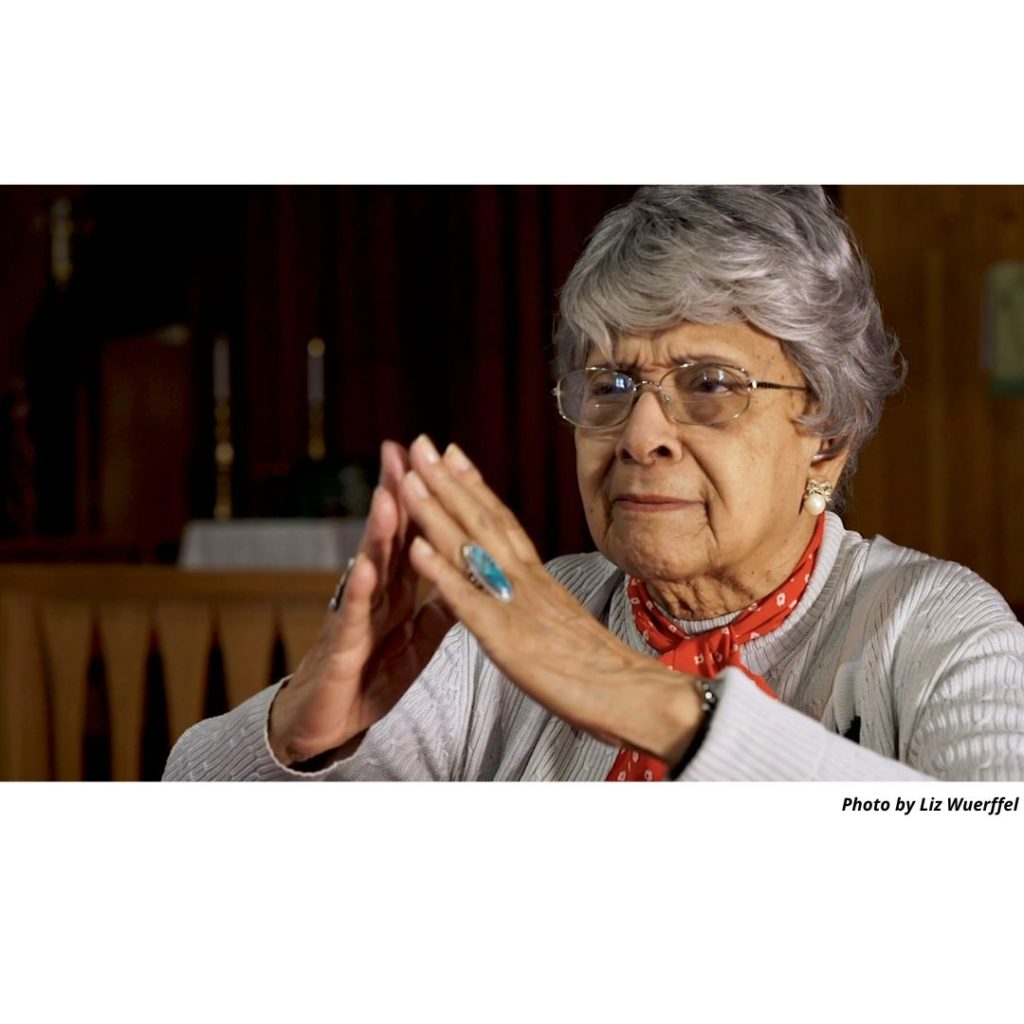 Born in 1917, Ms. Felicia Rhetta Childress has borne witness to every war since World War II. A native of St. Louis, the Gary teacher is set to mark her 105th birthday, on May 19th. She sat down with the Gary Crusader and shared recollections of her long life as a champion for public education, a local icon and Michael Jackson’s first music teacher.

By the time Mrs. Childress moved 300 miles to Gary, it had strengthened its legs as a strapping steel town deeply rooted in its working-class roots.  Founded in 1906 by the US Steel Corporation, the city was a place of promise and hope for African American families migrating from the harsh realities of the South. It also was a beacon of light to scores of Mexicans and European immigrants eager to fulfill the nation’s prosperity promise.

When Ms. Childress arrived in the city in the late 1930s, early 1940s, she staked her claim to the American Dream and began teaching music to primary school students as she worked to carve out a life. She would be 50 years old before Balm Leavell and Joseph Jefferson co-founded the Gary Crusader, to chronicle the lives and amplify the voice of the Black community.

Though Ms. Childress has long retired, she remains active in a book club, born just a few years after her own birth. She spends time reading poetry and reflecting on her life’s impact, and 48 hours before her 105th birthday shared part of her story in this excerpted interview:

“I will be 105 years old on May 19th. God is good. I had a twin brother, but he died when he was 93. I was born in Missouri in 1917. What was it like growing up during that era? Well, it was quite segregated in St. Louis–you know, it was really considered a southern town, even though it is almost in the middle of the country. But it was really like the deep South in its ways, you know, and I, I didn’t know a certain amount of freedom until I moved up here to Gary.

“Both of my parents were educators. My father was a biology teacher in high school for a while. My mother was a teacher, and she was also an excellent musician… I could not play the piano like she could or the way I wanted to, because my fingers were short. My sister had long fingers and she ended up playing a piano concerto to graduate from Talladega College. I was so upset that my hands were the kind that could not play like my sister’s. You know, but I played good enough for the kindergarten children. They loved me so with all their hearts and I loved them.

“Well, a lot happened in the early years. My mother died of cancer. The physicians did not know what to do with cervical cancer back then. She died (though I can’t remember what year it was). I can figure it out. I was getting ready to graduate from college and my mother was so ill that she could not attend the service. And she died, right after that.

“My brother Henry was going to Hampton. He was crazy about Hampton, and he stayed there and graduated from Hampton University. I wanted to go. But my father and mother decided where I was going to school. I went to a little school in St. Louis, I mean a college and I lived there, and I graduated from there. I started teaching. But I wasn’t too happy because, like, all of the young people I wanted to leave town.

“Louise Chapman wanted me to come up with her to Gary because she needed someone else to help with the children because her husband had come to Gary. He was over the Urban League and it was a lot of responsibility, but he had gotten a job and he wanted the family to come and Louise was going to come. And so, I ended up coming (too).

“I held Edwin Chapman in my lap, Louise was driving, and then there were two other children in the back. Mr. Chapman had gone on ahead of us. And I remember coming down, 25th Avenue in Gary and seeing these bushes being blown around. And I said to myself, this is like the Wild West. That’s tumbleweed and I looked, and I said my goodbyes.

“…I don’t know whether you knew. Mrs. Hardaway. She was a very well-known real estate person in Gary in the 40s and ‘50s. She knew more people and she talked me into staying and she really said, well, ‘Gary needs a person like you’ and said, ‘I’m going to talk to Mr. Tatum (at the school district).’  I went to see him and he said, ‘Miss Retta,’ I wasn’t married then, ‘I will consider your application and I want you to go down and talk with the elementary school supervisor and be on the list.’ So, I went to Horace Mann because that high school was where the Board of Education was located. And I sat in the chair and talked to Ms. Ingles, I forgot. But anyway, she was the elementary school supervisor.

“I heard her say, ‘Well, Miss Rhetta, don’t you want the job?’ And I, I was amazed. I said, ‘Oh my! She is approving of me!’ So, I said, ‘I would certainly like to accept a job. I like this place and I like the way the system helps our children.’ I was hired as an elementary school teacher. What attracted me was that the system was built so that teachers could have one hour in the middle of the day, just work on records and, you know, things that they needed to catch up with and then go back to the work in the classroom in the afternoon. They didn’t have that in St. Louis and oh, I was so happy.

“I stayed as a teacher, you know, and I eventually married one of the Childress boys who were from Pine Bluff, Arkansas. Their mother had passed on, and the different siblings would marry and move away. Jennifer married and moved next door and Dubois married and moved from down the block and then eventually went to California and where he was over the custodial system in Los Angeles. They were all good-looking, except for my husband. I married the ugliest boy there was, but he was the nicest one among them. I don’t mean nice in a feminist way. He was a smart boy, really smart, and that’s what I liked about him. We’d get into arguments about different things, but you know, we were not enemies. We made a life in Gary for ourselves. He has since died.

“…I was like any of the teachers in Gary at the time dedicated and we highly respected our principal. He could stand in the middle of the halls at Roosevelt High School and just stand there. And all of the boys and the children would behave themselves and be quiet like someone was directing traffic.

“Anyway, so, anyway, to make this long story short, I would be working hard and doing things with the children, and I’d look up and there would be Mr. Tatum standing watching me, but I did not care because I loved those children and I was going to do everything I could to help them. And the children themselves must have known. And the mothers for some reason fell in love with me.

“One of those children was Michael Jackson. He was in my early classes at Garnett. And so at this time, this, what is this, there was this movie, I’ve forgotten the name, but it had a song called, ‘Climb Every Mountain.’  But at any rate, Michael could sing ‘Climb Every Mountain.’  He says to me, ‘I know all of the words and I thought nobody knew (The lyrics because the movie had just been reviewed), but he said he did. Michael had a slight stammer, but I never called attention to it and eventually, he grew out of it.

“But anyway, Michael came and stood right by me. And I said, ‘children, did you know, you have a soloist in your group,’ and they looked at me. They said what is that? I would deliberately use terms like that because that was my way of introducing certain words to the children. And so I said, ‘a soloist is a person who can make music all by himself. Sometimes he might be playing the piano by himself or he might be singing by himself.’ And then I heard Michael sing she said, her voice trailing off as if she were hearing his song in the distance.

Mrs. Childress added final thoughts on how she’s seen the world change in the 10-plus decades but not fast enough, telling the Crusader, “Oh my goodness. I think unless the good people stop being passive. I can only say that word because a lot of good people in the world know what to do to make their children achieve,” she said.

“Well, they’ve lived quiet lives, but they do not get up and use their mouths in the community. It is because they’re a lot of people that think there’s some kind of magic to talking to a group, but all you have to do is stand up and open your mouth.”