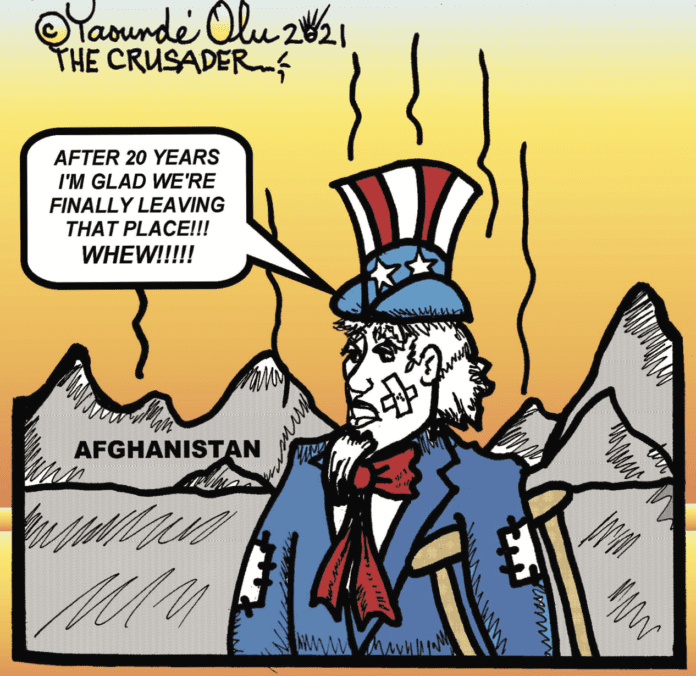 We are all connected. For some reason, people don’t seem to understand this. After 20 years of U.S. engagement in Afghanistan, President Joe Biden has kept his promise about withdrawing from that beleaguered nation. The evacuation of all embassy personnel is now complete, and others are attempting to flee Kabul while they still have the opportunity. Biden’s goal is to get Americans out and to also protect those individuals who have helped the U.S.

Admittedly, Biden inherited a deal cut by his predecessors, and it is believed that Afghanistan’s security forces may not be able to protect the civilians. The Pentagon is sending an additional 1,000 troops to Kabul to help evacuate more people.

Actually, this is a big mess and has been for a long time. This skirmish started as a reaction to what happened regarding 9-11, wherein the U.S. sought what it said were the perpetrators of that debacle in Afghanistan. Al-Qaida is no longer a threat, and Osama bin Laden has been killed, so the only engagement the U.S. would have if it remained would be interactions with the Taliban, which would be a losing proposition.

Some Americans harbor the opinion that Biden’s withdrawal from Afghanistan is a botched attempt. This may be true, but there is no easy way out of this mess. We had no viable political partners in Kabul, and the battle is said to be unwinnable because a counterinsurgency will have to generate its own will in order to win. Over the course of 20 years and trillions of dollars, the U.S. has no partners there and our involvement is futile.

The United States served honorably and valiantly in Afghanistan for those years, but the decision to pull out is inevitable due to the need to end a “forever war.” The White House has faced significant backlash as GOP leaders criticize the current actions. It’s ironic because the initial engagement happened under the GOP administrations. Biden was left with a series of bad options and has decided not to carry this losing situation further.

One of the huge problems is the collateral damage that stands to be endured by Afghani women and girls. The thinking is that they will be in dire straits, especially in the Kabul region, with the pull-out. At press time, the Taliban is advancing and will soon have full control over the region. So far it appears that this will represent a lot of misery to a lot of people, especially to women and girls, who fear being thrown back into the dark ages of oppression by the Taliban.

The Taliban holds all of the cards at this time and this has resulted in a tricky and dangerous situation. President Biden is doing whatever he can to get as many people out as he can without too much damage. Long term, the only leverage the U.S. has in dealing with the Taliban, according to some pundits, is said to be money. It is also thought that the Taliban would seek to have a better profile in the eyes of the world, but the thinking of others is that they don’t really care about being perceived as international pariahs.

Basically, President Biden is doing the most prudent thing by pulling out of an area that we had no business being in, in the first place, according to some pundits. As said previously, there is no easy way out.

The biggest danger and loss will be endured by the women who appear helpless in the face of Taliban rule. It’s possible that the direction the country takes could be influenced by them, however, because they have the most to lose. As the saying goes, “It’s hard to keep ‘em down on the farm once they’ve seen gay Paree.” Hopefully, that taste of freedom will serve as a liberating mindset for them that could fuel a freedom movement, though it will certainly not happen without a struggle.

In the meantime, it would be prudent if the Biden administration could figure out a way to help offset the damage that has left its imprint in Afghanistan. We can’t just leave the women and girls at the mercy of a formidable oppressive force. A lot of people have lost their lives due to our involvement in that 20-year war, and it stands to reason that we don’t want to see a continuation of that situation.

Perhaps a U.S. task force can be created stateside that can work to identify an exit strategy from that troubled region that could address some of the challenges faced by Afghani women and girls. Of course, this would be no easy task, but it warrants an attempt. A Luta Continua!