LEVELS AND DEGREES OF BULLYING 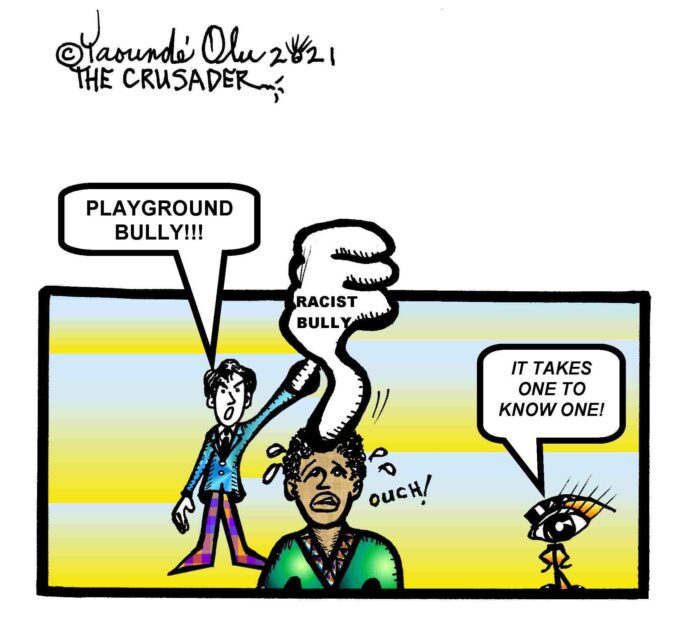 The problem of bullying seems to be escalating everywhere you look these days. Generally, when we think of bullying, we think about what happens on school playgrounds, in classrooms, and in restrooms among our youth. Truth be told, bullying takes place everywhere, on every level of society.

One of the definitions of bullying is the act of seeking to harm, intimidate, or coerce someone perceived as vulnerable. Does this sound familiar? It is a hallmark of any society that has distinct divisions of power. The wealthy will always be able to bully those without economic wherewithal, and the politically powerful will also be able to do the same to the politically disenfranchised. It is the inequity between groups that sets the parameters for bullying to occur.

On school playgrounds, young people, both male and female, can fall prey to bullying. So-called nerds and those who are academically inclined very often face opposition from those who are less academically adept but are stronger physically. This is especially true in some Black communities where academic achievement is equated with “acting white.”

Many people think that the issue of bullying is a simple matter to contain if only school personnel would nip it in the bud. This is far from the truth, and bullying is one of the most intractable problems faced by schools. This is because the problem is seldom confined to the school environment. There have been schools that have instituted schoolwide anti-bullying campaigns that have failed to significantly impact the problem. This is because a lot of what happens has its origins before or after school!

Schools don’t have jurisdiction in communities; they can only deal with issues that occur on school campuses. They can suspend or expel perpetrators for events that happen on school grounds, but cannot control what happens in the streets. The tentacles of the streets do reach into schools, but consequences are elusive when it comes to holding people accountable for what does not occur on school premises.

Now, one of the reasons that bullying will most likely be an ongoing problem in a lot of schools, even those with Social Emotional Learning (SEL) programs, is because that same tendency toward bullying extends to the highest places in society.

One of the biggest role models for bullying occurred in the United States during the past four years. The former president of the United States blatantly used the bullying tactic to such an extent that he held his entire political party almost in the palm of his hands. The result is that we have all observed how the political will of the GOP has been highjacked and has evolved to a level that American democracy is endangered.

The latest example of bullying is seen in Afghanistan wherein the Taliban has taken control of that nation. They are so feared that people are trying to flee the country in droves, leaving their possessions behind. Their fright is almost palpable; this is clearly because the people are familiar with their atavistic bully tactics.

Fundamentally, we can conclude that bullying is a natural characteristic of current humanity. It can be seen among preschoolers, on elementary and secondary school playgrounds, in oppressive workplaces, on national political and economic stages, and in boardrooms everywhere.

The problem will not be easily solved until humanity sincerely attempts to embrace the brotherhood tenets required for a successful world. This is why classroom bullying is such a tough row to hoe. The truth, however, is that the classroom is one of the best places to address the problem.

If young, impressionable minds can begin to demonstrate a higher level of human interaction as encouraged by enlightened teachers and school administrators, we just may see some progress toward the eradication of the problem of bullying. A Luta Continua.

Pace Suburban Bus announced a commitment to Zero Emission Vehicles (ZEV) by 2040 in their strategic plan, marking a significant step forward for environmental...