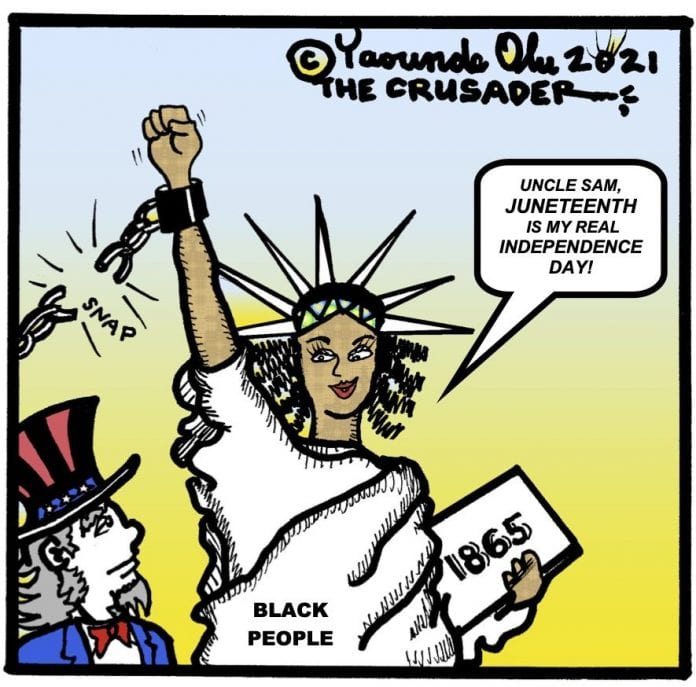 Recently, Black America was treated to an unexpected gift of sorts from the United States government – Juneteenth, the observance of the actual time when the last slaves discovered that they had been freed, which was a full two years after Emancipation was made into a federal holiday. Basically, because the Internet, telephone and television were non-existent, news didn’t travel that fast in those days. People had to rely on government troops, among others, to spread the word.

Though it is true that a lot of people see this move as a sign of progress regarding the treatment of African Americans by the political establishment, others see it as a distraction.

While voter suppression laws are spreading in many states, we have been thrown a bone that can serve as a diversion, as some people opine. People see the move as disingenuous, not substantive, during a time when the real push is on for reparations. It is tantamount to asking for steak but receiving hot dogs instead, or at least many see it this way.

Actually, others say that it would be prudent to continue to demand it ALL, i.e., we can ask for reparations, voting rights, and parity in all areas of American life while at the same time enjoying incremental gains. The recognition of Juneteenth as a national holiday is an incremental gain.

Freedom for white Americans did not translate into freedom for Black Americans. This is why there is so much cynicism surrounding the sudden granting of a new federal Black holiday.

So, it can be seen to be somewhat of a dilemma for Black Americans: there are two celebrations of “freedom.” And yet, the irony is that neither one has resulted in true freedom for Black people. Admittedly, the community has come a long way in comparison to the circumstances that faced us in years past. More people are achieving in diverse fields, and the standard of living is rising for many Blacks who have had the wherewithal to take advantage of the resources available in what is still considered to be the wealthiest nation in the world.

At the same time, however, the country is devolving on other levels. Crime, police oppression, gentrification, and more are causing more and more Black people to face dire straits. So, the questions could be, “What good is freedom if it cannot be accessed; if barriers are placed between people and the resources that they desperately need?” “And what good is it having two days to celebrate a freedom that escapes the grasp of many?”

Moreover, how should we view these new circumstances that we find ourselves in regarding the two holidays? The answer is that it doesn’t have to be either/or: it can be BOTH/AND!

We can enjoy the incremental recognition of the new federal holiday, which will bring additional focus to the trials and tribulations faced by us as a people and at the same time observe the nation’s independence as represented by the 4th of July holiday!

As a nation within a nation this is a fitting stance. It is said that the Juneteenth holiday is basically symbolic and without substance. If we understand that symbolism informs our views of reality, we can then understand how to utilize that symbolism to get closer to the real freedom that we seek. It will not be handed to us: we have to continue to work for it, just like the colonizers did during those many years ago when they fought for their freedom from England.

As the old saying goes, “freedom ain’t free!” How will we know when we’ve achieved freedom? That is the next question that must be answered. A Luta Continua.