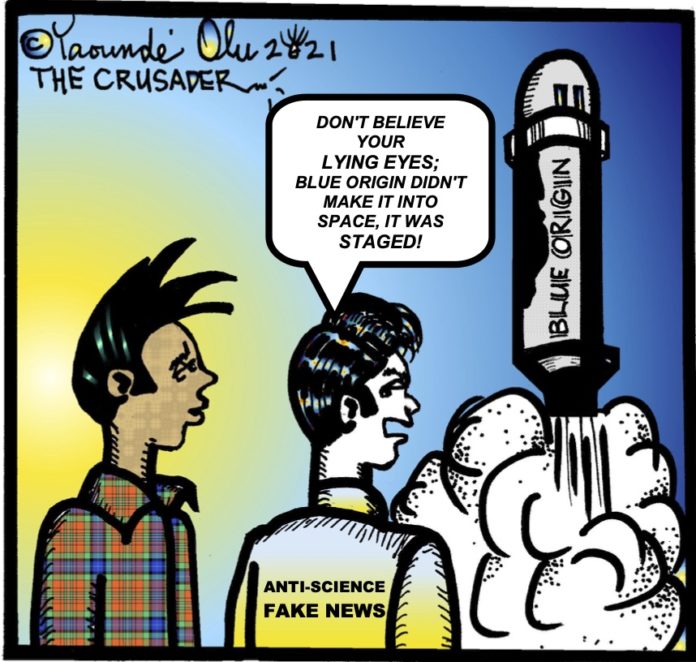 Lately, there have been a lot of challenges in understanding how science works. The issue is that the average person has not yet caught up with current scientific knowledge, OR, there is a disbelief in the truth of new scientific paradigms. Some of this is connected with fake news distributed by the previous political administration in the U.S. As a result of a very narrow worldview coupled with fake news propaganda, people don’t know what to believe. A lot of folks are starting to disbelieve everything.

One of the most striking and surprising examples of this notion is the recent launch in space of Jeff Bezos’ Blue Origin. During that launch, former Star Trek actor William Shatner became the oldest individual to go into space, at 90 years of age. The launch was televised, and the civilian crew spent between 10 and 11 minutes in space. The entire event ended without a hitch, yet a number of observers are convinced that no one actually went into space – they are convinced that the entire thing was staged. Never mind that major television networks covered the entire event live!

Interestingly, those who were attempting to convince people that what they had seen had not happened, they did not give a good reason as to why someone would spend huge amounts of money as civilians to create and launch a complex rocket; what would be the motivation to fake this extremely expensive venture?

This brings to mind the fact that there are many people who today refuse to believe that the Moon landing ever happened. They are convinced that the entire thing was staged in a movie studio. These apparently are the same type of anti-science people who are making it difficult for people to believe in the “science” of vaccines.

The foregoing wouldn’t be so bad, maybe, if people had alternate belief systems that were uplifting. Quite to the contrary, there is also a streak of mean-spiritedness that is part and parcel of this anti-science movement. Instead of finding solace in alternative ideas, people of this ilk are attacking people whose ideas differ from their own.

This is probably what is being reflected in the situation that we find ourselves in regarding the Coronavirus anti-vaxxers and anti-maskers.

In the past, the vaccine movement has resulted in the eradication or control of a number of serious diseases including, but not limited to, polio and smallpox. Students in public schools have been required to be vaccinated for years; they are not able to attend classes without being vaccinated, which has saved many lives.

Today, surprisingly, grown people are threatening school board members with violence because certain school boards are mandating that students wear masks; the districts are not even requiring vaccinations. Moreover, in one large city, police officers who have been mandated by the mayor to become vaccinated have been encouraged by political opponents to resist the mandate.

Why is all of the foregoing important? It is because people are becoming so anti-science that it is resulting in deaths. If people don’t believe in the science behind vaccines, or even masks, it works against the common good.

People who are easily hoodwinked by purveyors of fake news will ultimately work against other people. It is understandable why some African Americans might be leery about vaccines because of a distrust in authorities based on previous irresponsible behavior, but the refusal to wear masks is another case altogether.

All of this points to the dangerous situation that Americans, and especially Black Americans, are facing as a result of being hoodwinked by false scientific information. It is resulting in the demise of vulnerable individuals. The anti-science movement is being used as a tool that is causing people to work against their own best interests.

Fake news and phony “facts” are anything but benign; they are deadly, and we need to do whatever is possible to fight this malevolent trend. A Luta Continua.