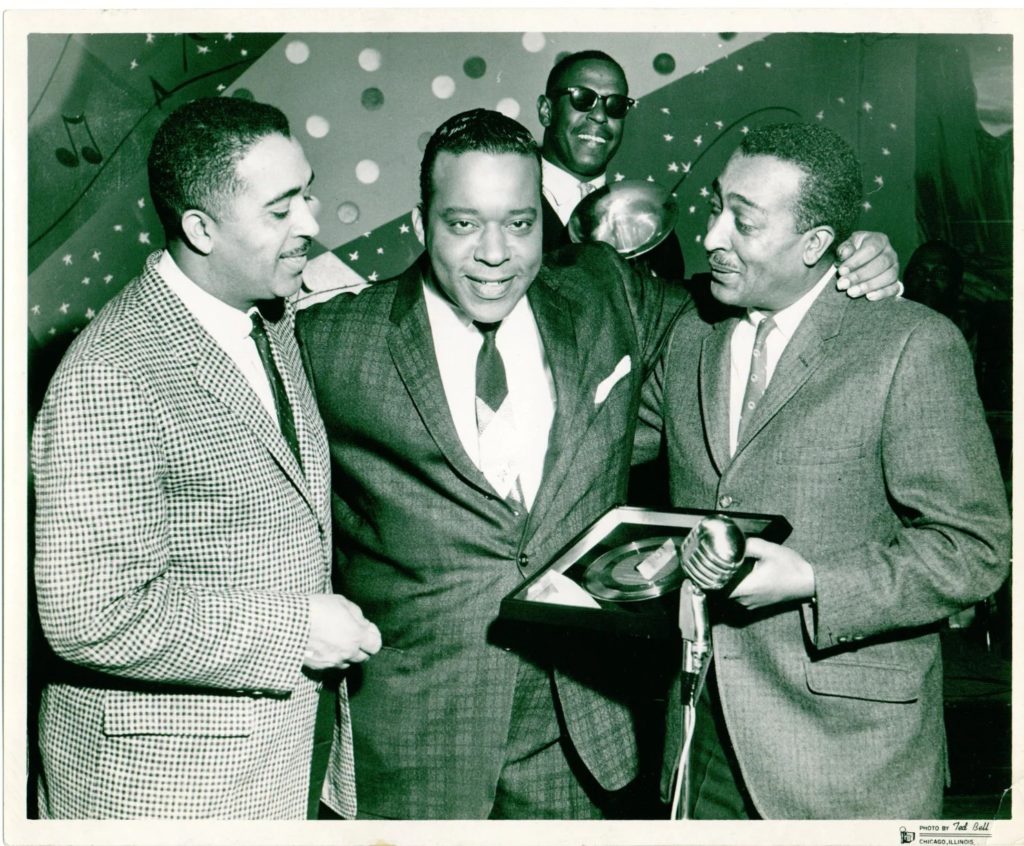 Among the multitude of artists, producers and arrangers in American music were a pair of dynamic siblings instrumental in creating, promoting and distributing Chicago’s rich, soulful sound throughout the country. Ernest (1921-1990) and George Leaner (1917-1983) were two of the most powerful African American music executives of the 20th Century.

Originally from Jackson, Mississippi, the Leaners owned independent record labels, production companies and music studios, in addition to controlling the largest Black-owned music distribution company in the U.S. Without their efforts the music of Curtis Mayfield, Barbara Acklin, Otis Clay, and scores of other Chicago artists might not have reached audiences throughout the country.

The Leaner brothers were originally introduced to the industry through their uncle, Arthur, who gained popularity and significant influence as the ‘Godfather of Black Radio’ under the moniker “Al Benson.”

The Leaner men moved with their family to Chicago’s South Side in the 1930s. Following World War II, the brothers found odd jobs working at record stores in Bronzeville as jazz, gospel and blues captured the country and carried the stories and voices of hope, despair and dreams.

Their sister, Bernice, an attorney, encouraged her brothers to assist her husband in his record store in Bronzeville. After military service and a stint at junior college, George and Ernie took various industry jobs as music producers, promoters and distributors before striking out recording local blues artists.

In 1950, the brothers co-founded United Record Distributors, headquartered at 1827-1829 S. Michigan on Record Row, and specialized in advancing the city’s soulful renditions throughout the country.

While operating those companies, the pair also doubled as producers and talent scouts throughout the Midwest. As such, the Leaners were the first to record a budding child group out of Gary, Indiana, later known as the Jackson 5.

Through their music publishing and production wing, the quintet recorded “I’m A Big Boy” with nine-year-old Michael singing lead in 1967. The song was re-recorded and released on Steeltown Records a year later. With mediocre success, the group was unable to secure a deal in Chicago.

“There were quite a few people that were trying to manage (the Jackson 5) when they first came out of Gary, including (Chicago disc jockeys) Pervis Spann, E. Rodney Jones and Bill Dudley,” Ernie’s son Eric Leaner told the Crusader.

“My dad and uncle also were (involved)—and they were all trying to do this deal to get these kids discovered—but my dad and uncle ultimately took a pass on signing them to a full contract.”

The Jackson family would later negotiate a deal in Detroit with Motown Records and the rest is recording history.

“It is also true that (my father and uncle) also took a pass at a group hailing from England who called themselves the Beatles,” Leaner said, with amusement.

“I don’t think that they had the capacity to handle those careers and they knew that. My father and uncle were astute businessmen and really understood the investments it took to launch successful music careers.”

Eric Leaner said he spent most of his time at his family’s home in California when his father was at the height of his industry career. However, his older sister Phyllis worked side-by-side with her father at United Record Distributors, while their other brothers Tony and Billy labored at the family’s various wholesale and retail record stores such as Record World, 228 S. Wabash, and Ernie’s One Stop, with locations at 79th and Maryland and 47th and Indiana, respectively.

Described as affable, George Leaner was the family “jokester,” and Ernie, according to his children, was more reserved. Both men spent their golden years with their families.

The Leaner brothers were also known for their involvement in Chicago’s budding freedom movement, having donated money and resources to civil rights groups attempting to break the back of American apartheid.

“Dad didn’t talk a lot about race with us as children,” said Phyllis Leaner-Newkirk. “He wanted us focused on our education so we wouldn’t have the sort of barriers he had.

“(Dad) was a good businessman and a strong manager,” she told the Crusader.

“I started as a teenager at United working as an intern—getting coffee, filing paperwork and doing things like that. Dad had a lot of loyal employees. He was a great person and knew how to keep people motivated. Of course the best part was being able to hear the musicians who were recording next door in my uncle’s studio. It was an amazing time.”

The Leaner siblings both acknowledge their father’s and uncle’s perseverance, brilliance and nose for business as being instrumental to their success.

“They made history behind the scenes and because of them a lot of people became famous artists—and rightfully so,” Eric Leaner said.

The Chicago Sound: The Legacy of Record Row