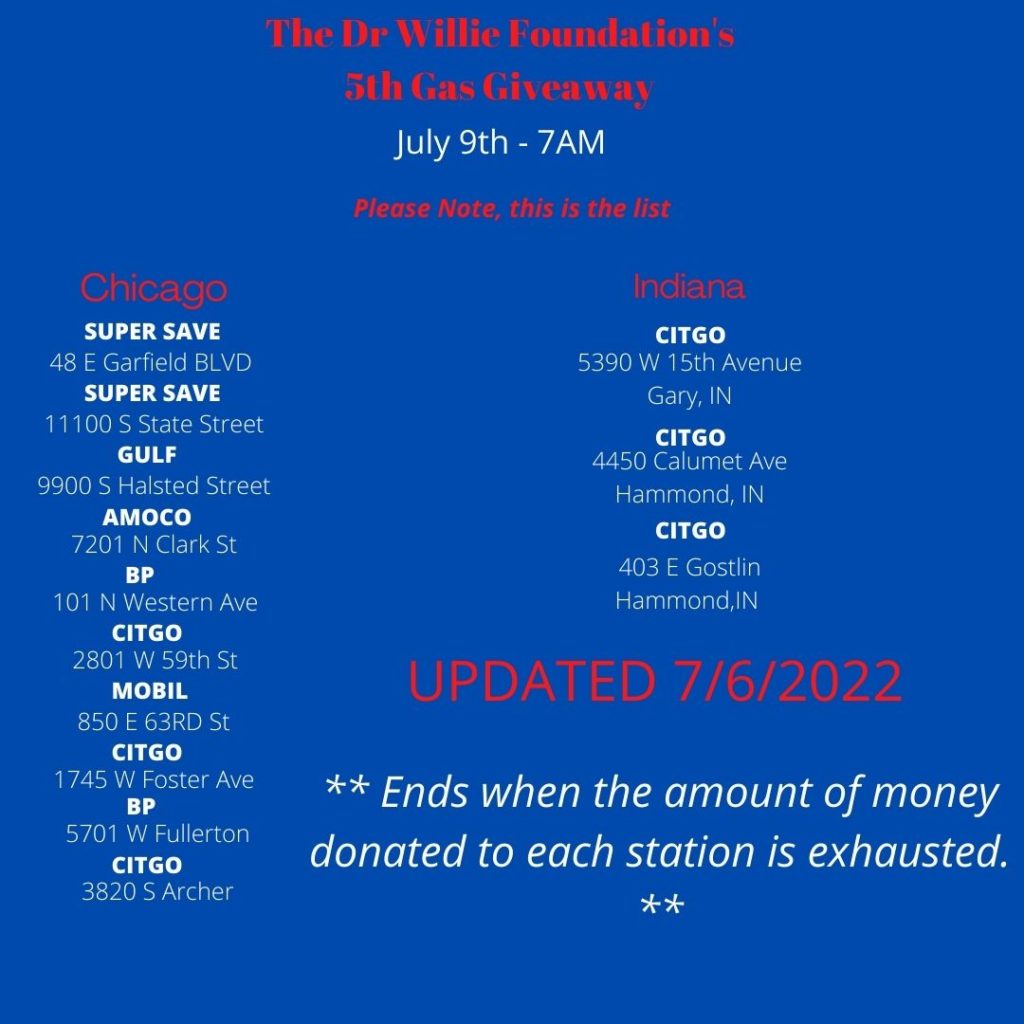 Humanitarian Dr. Willie Wilson is kicking off his fifth free gas giveaway along with Gary, Indiana Mayor Jerome A. Prince, with a 7 a.m. press conference, Saturday, July 9th, in Gary, Indiana, and a 9 a.m. conference in Chicago to ease the pain at the pump for people who may be forced to choose between paying for gas over providing food for their families.

Dr. Wilson said in fairness he has covered all sides of Chicago with his gas giveaway and adjacent areas as well.

“This gas giveaway is part of a $2 million pledge that we made,” Dr. Wilson said. “This is our fifth gas giveaway and so far, we have contributed $5.2 million in the last two or three months to the cause. I did this because I saw the need to help people who are still suffering financially.

“I use to pay $75 for a half-a-tank of gas in my car, but now it cost me about $150.  People are still in need of assistance. We asked Mayor Lori Lightfoot to suspend the gas tax in Chicago because that will also help people at the pump,” Dr. Wilson told the Chicago Crusader.

“The need for help is still there. I recognize that soaring inflation is causing pain on household budgets throughout Illinois. Today, the cost of gasoline and food is at a 40-year high. Lower income families spend about 77 percent of their income on necessities. Inflation is eroding the savings of many Americans. In Chicago, residents are paying the highest price in the state for gasoline. The state of Indiana just raised the tax on gasoline,” Dr. Wilson said in a statement.

“Our residents deserve a break from high gas prices, and I am pleased to offer them a free tank of gas. Also, I call on government to temporarily suspend their gas taxes to help all citizens that are struggling with high fuel and food prices. I also asked Mayor Lightfoot to suspend the gas tax. “I am proud to have partnered with 13 gas stations to provide free gas,” Dr. Wilson stated.

Dr. Wilson also announced that he will be having another food giveaway next month where people will be given a $25 gift card to help with their groceries.