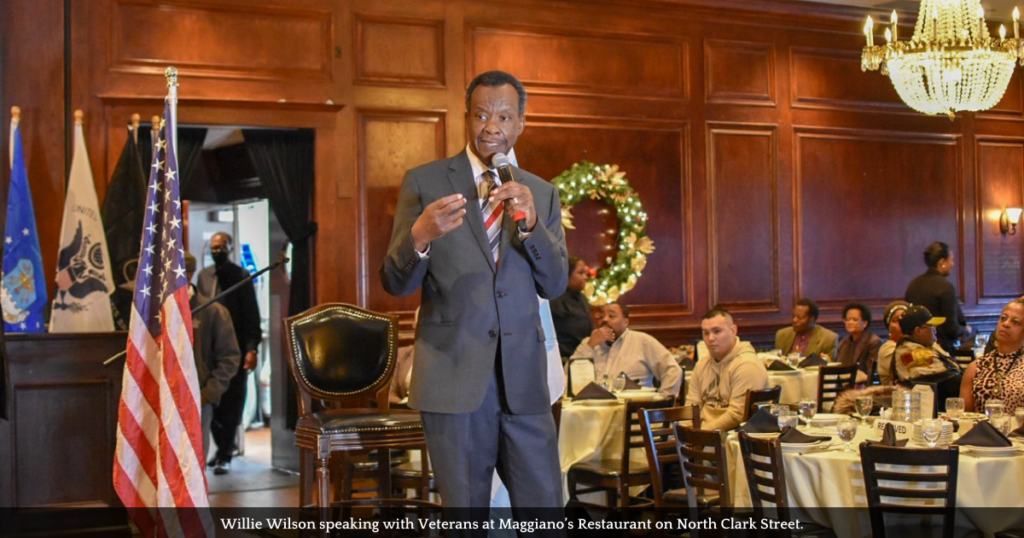 Mayoral hopeful Dr. Willie Wilson on Friday, December 9, held an appreciation Christmas luncheon at a high-end restaurant where he also promised to establish a City Hall Veterans office. The office will be staffed by veterans, with satellite offices throughout Chicago. Wilson wants to reopen and rehab shuttered schools for use by homeless veterans and create an amber alert system to round up missing students. 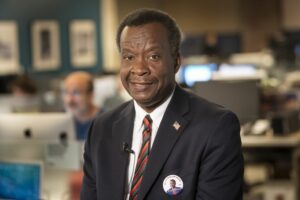 Speaking to more than 200 diverse veterans at Maggiano’s Restaurant on North Clark Street, Wilson addressed the issue of homeless veterans on various levels.

For years, Wilson has given money to homeless people living under the viaducts and in tent cities throughout Chicago. He walks into the camps and hands people living there crisp $100 bills—giving some even more.

He told the Chicago Crusader he plans on reopening and rehabbing closed schools for homeless veterans.

“We pay and maintain them just to keep them closed, so why not reopen them for a good cause?”

Wilson said homeless veterans are a good cause especially since there are too many vacant houses. “No one’s home should be on the streets of Chicago,” he said.

Referring to the rehabbing of empty schools and abandoned buildings, Wilson explained, “We then can create an economic powerhouse.” He said this is important, to create one community and act in a unified manner, to be successful.

“Our veterans have sacrificed for this country and secured our freedom. Too many have been forgotten and are struggling with homelessness, food insecurity, and a lack of health services.”

Wilson vowed to establish satellite veteran offices throughout the city of Chicago, including one on the West Side, South Side, North and East sides with all linked to the City Hall Veterans office for unity and the same communication. The offices, he said, would be a coalition of diverse veterans. “Veterans need to be taken care of because they have protected us,” he remarked.

Wilson said he planned the luncheon so that the veterans could personally tell him their needs and concerns. He also provided a resource table for veterans during the event.

Perillo said he spent a few hours with Wilson and called him “very interesting” and “the solution to many of Chicago’s problems.”

“I was born and raised on the West Side,” Perillo told the audience. “I can relate to some of these kids. My father died when I was 13. My mother came from Italy.

“My role models were not doctors and lawyers,” Perillo said.

“I went to the Army at age 17 and saw that America was a great place.” Rather than emulate those he saw who were breaking the law, Perillo said he decided to work hard.

“I really feel sorry for those young kids who are stealing,” he said. “They are being let go by judges if they commit a crime. They should penalize them. They should give them two years in the Army. Give them a choice,” he said referring to sending them to the Army instead of letting them off the hook for their crimes.

Saying Chicago is the greatest city, Perillo said, “It’s being run down. Everywhere I go when I say Chicago, they use to say, ‘Michael Jordan.’ Now they say they consider Chicago as a place that will hurt us,” he said referring to the escalation of crime that is causing some businesses like Walmart’s to threaten to close all of their stores.

Turning to Wilson, Perillo said, “He’s a good man or I would not be here.” He then shook Wilson’s hand and hugged him, adding, “I hope you make it.”

“You have to care about people,” Wilson said. He made it clear he cares about homeless veterans and said those who are thinking of committing suicide should not do so, but rather should turn to God.

“You should not think about committing suicide,” Wilson said, “You got to believe there is a God.”

Veterans are 1.5 times more likely to die by suicide than other non-veteran adults, according to psychologist Matthew A. Miller, Ph.D., executive director for VA Suicide Prevention in the Office of Mental Health and Suicide Prevention.

He attributes this to many factors, including high exposure to trauma, stress/burnout, isolation and loneliness, easy access to and familiarity with guns, and difficulties reintegrating into civilian life.

Wilson quoted the city of Chicago’s estimate that there were nearly 200 homeless veterans living in shelters in Chicago last year.

Asked what he would do to help male veteran fathers who have custody of minor children, Wilson said, “Some things we are good at and others we don’t have answers yet; but we will work together and make it happen.”

He praised the veterans present for their military service and told them the military didn’t want him. In fact, Wilson said the military assigned him a 4F status. He didn’t know what that meant at the time, but he believes today he can make a difference in the lives

Saying he has been blessed to have everything he has wanted even though he only spent one day in the eighth grade and chopped cotton for 32 years for no pay, Wilson said, in his “small world,” all he wants to do is to serve people.

“To serve others one must sacrifice their comfort zone to help others,” he said, pledging to do just that for the veterans and for the city of Chicago. Wilson said he will not take a paycheck if elected. In the past, he has vowed to give that money to churches.

Wilson pledged to create grants and hire those who can create a “safety net” and help bail out the veterans until they are successful.

Referring to many American Legion posts that need renovating to attract younger people to these organizations, Wilson said, “We must work with the youth, the seniors, like myself, and take these places and turn them into trade skill (sites) to produce the best America has to offer. We must use them longer than just a few days a week,” he said.

Asked about the special disabled veterans, Wilson received a round of applause when he vowed to make handicapped sites accessible.

When asked what he thinks is the biggest obstacle preventing elected officials from working for the good of the people or for themselves or their Party, Wilson said some politicians think only of what they can get for themselves and take from others. “We must change that, and we will,” he said.

When he takes office, Wilson said, “I don’t want anything for myself. I won’t take a paycheck. We must run a good, clean government.

“I am not for sale. We come for this job only to help people. I don’t want nothing for myself financially. I promise you,” he pledged. “I am not taking a paycheck.”

When asked about crime, Wilson said, “We will work together with the community and make sure we have economic empowerment where students can learn a trade while in school, then once they graduate, they will have a job. That helps stop crime by people having a good income.

He elaborated, “You got a person waving a flag (on highways); that is setting up the infrastructure of creating jobs, getting contracts. If you have food in your refrigerator, you don’t have to go out and steal,” he said.

To meet that goal, Wilson said he will put the trades back into the school curriculum. Asked if he would restore the truant officers’ system, Wilson said he would prefer an amber alert system, with the Chicago police responding to that notification rather than having police in the schools. He thinks that would be economically more practical, while holding the students accountable for their attendance.

On feeding the homeless, Wilson said restaurants and other businesses can work together to offer them jobs; then they can be able to buy their own food.

“We must work with our businesses to eliminate homelessness. If you go to school, you can have three square meals. Why can’t we do the same for homelessness?

He has one idea for feeding the homeless…to create satellite schools where the homeless can get three meals a day and that would include senior buildings where he says many don’t have enough money to buy their own meals.

“We will work with our restaurant industry to create culinary schools and help people set up food pantries. A lot of people get food, but they don’t have a place to cook it,” Wilson said. “Homelessness can be eliminated. We waste money. The homeless should have a place to go and eat with dignity.”

Wilson said he was ready for the mayoral forum held on Tuesday, December 13.