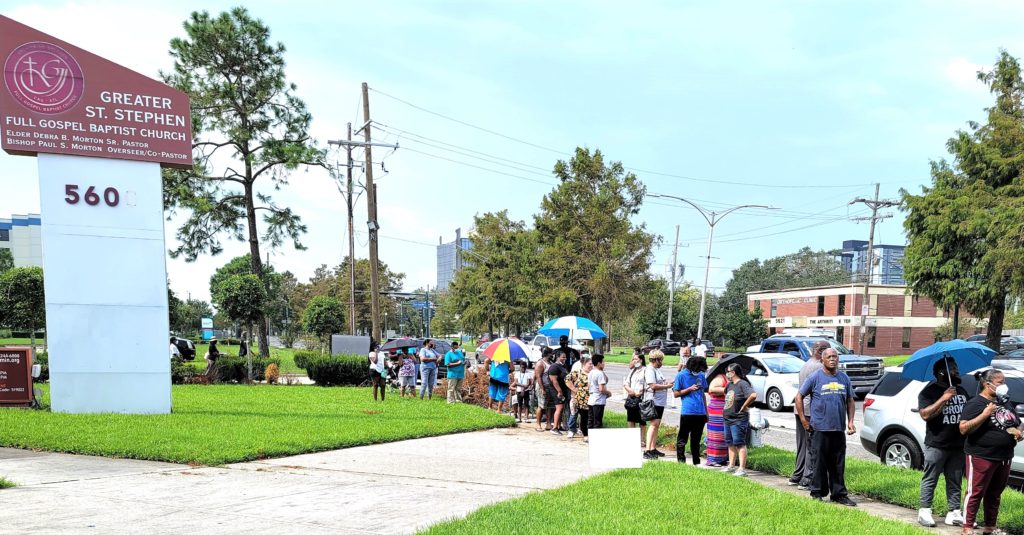 Concerned over the welfare of Hurricane Ida victims in Louisiana, philanthropist and humanitarian Dr. Willie Wilson and an entourage that included Representative Danny K. Davis (D-7th) went to New Orleans Saturday, September 4, and on the next day passed out $1 million to mostly African Americans, hardest hit by Ida’s damaging and deadly winds.

Because Wilson was carrying $1 million cash in $100 bills, he was met by the New Orleans police at the city limits. They escorted his group to the Greater St. Stephen Full Gospel Baptist Church, headed by Elder Debra B. Morton, senior pastor, and Bishop Paul S. Morton, co-pastor. New Orleans Mayor LaToya Cantrell was also present.

Tired of flying, 73-year-old Wilson decided to drive to New Orleans, 200 miles from where he was born, in Gilbert, Louisiana.

Wilson was born in abject poverty and too often had to ask for a slice of bread from his neighbors just to survive. A self-made multi-millionaire, Wilson has not forgotten his humble beginnings, which drive his passion to give back to those in need.

The philanthropist is known to give away millions of dollars every year. When word spread about Wilson’s arrival, people began lining up for blocks, according to Wilson and his staff of 20 that accompanied him.

“I took Congressman Davis with me because he is my friend, and because Monday (September 6) is his birthday, I decided to fly him back home Sunday night so he could celebrate in time,” Wilson told the Chicago Crusader.

Asked why he chose New Orleans and to bring $1million, Wilson said, “I went there because those people need help. Many of them may not have a bank account and if they did, the banks are closed, as are currency exchanges. What they needed was cash. That is why I brought $1 million with me,” he told the Chicago Crusader.

Queried regarding concerns of carrying such a large amount of currency, Wilson said, “I took two security guards with me from Chicago, and we had the New Orleans police backing us up. My staff was there also for crowd control.”

The first day Wilson and his crew arrived, Saturday, September 4, he went to Jackson, Mississippi, and passed out $1,000 to each of 200 African American and Latino churches. “We donated about $40,000 to those churches and their staff,” Wilson said explaining the pastors in turn would be able to help those in need.

In Louisiana, the businessman notes, “There were a lot of people there. We had the New Orleans Police Department and my staff controlling the crowd. People were very orderly and grateful. We couldn’t talk a lot because the line was so long. People just shook my hand and kept moving. The line extended for blocks,” Wilson recalled. After passing out all of the $1million, Wilson said the New Orleans police escorted him and his staff to the expressway.

En route back to Chicago, Wilson said he saw houses blown away, rooftops peeled from homes, a lot of damage from Hurricane Ida. He said his arrival came one day before some of the residents’ lights were turned back on. However, NPR reported that thousands of seniors were literally left in the dark; some were wheelchairbound.

And right now that is what Wilson is focusing on, seniors, including more than 10,000 living in 62 CHA senior buildings. The humanitarian said within two weeks he will be giving away up to $300,000 to these seniors.

“Right now I am focusing on supporting some of the African American churches in this area and helping some senior citizens with cash. “This is our third time this year doing it,” Wilson said referring to helping CHA seniors.

He is also giving away cash to seniors living in Olympia Fields, Blue Island and those in private senior buildings. “Many are too old to work or can’t get a job. They don’t have money to buy what they need. Some have $3 a week just for food. We give some a $25 Walmart gift card, but oftentimes they lose them; so we are bringing cash, that way they can go to the local store and shop,” the businessman said.

“We still give away money on the streets, including Lawndale and Englewood. We try to do the best we can depending on the budget. It seems like nobody cares about seniors anymore. That is why we are focusing on this population,” Wilson stated.