Dr. Damon Arnold knighted by Sovereign Military Order of the Temple of Jerusalem 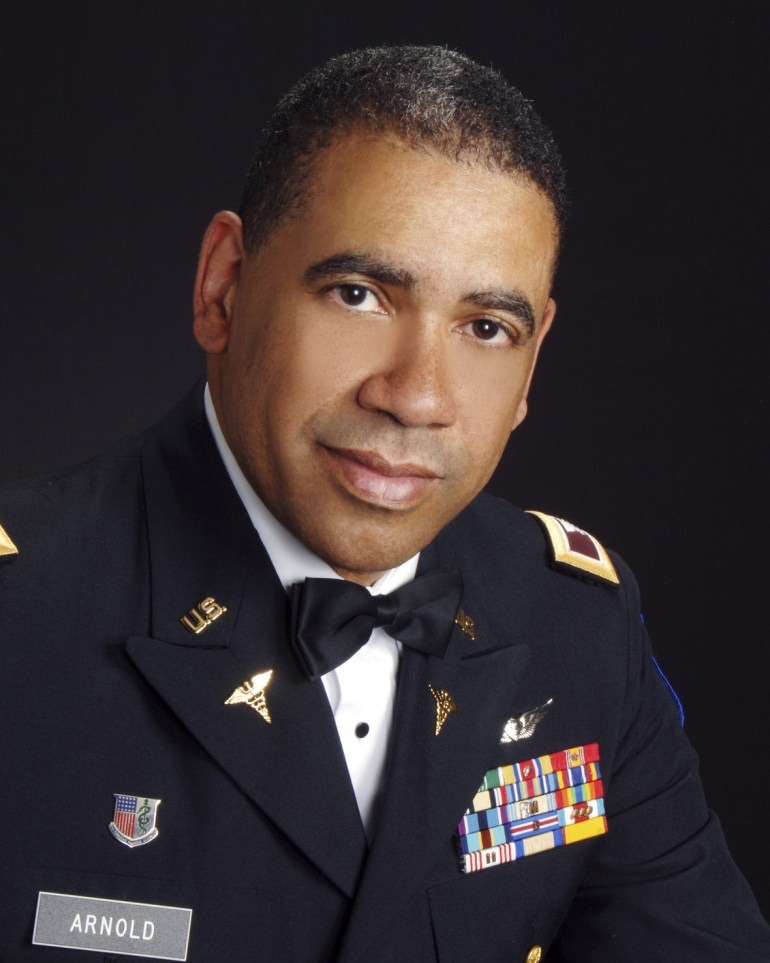 Having been awarded 29 military awards, including the prestigious Legion of Merit Medal bestowed by former President Barack Obama, Dr. Damon Arnold is charting a new course in life from saving lives to saving souls.

He was knighted on Saturday, May 22, by the Sovereign Military Order of the Temple of Jerusalem during a ceremony/banquet held at the St. Johns Chapel in Racine, Wisconsin. Dr. Arnold said there were many who came from around the world who were knighted. “It was a really great experience, a great ceremony,” he said.

The Knights Templar is a non-denominational Christian organization with a membership of about 5,000 members worldwide. Dr. Arnold was recommended to be knighted, and the organization conducted background checks on him and looked at his military and life accomplishments.

Dr. Arnold, who is currently the medical director at Blue Cross/Blue Shield of Illinois, is going from once caring for wounded U.S. and imprisoned soldiers during Operation Iraqi Freedom to being the director of the Illinois Department of Public Health and is now going down the path of global Christian healing and protection.

He explained that the Knights Templar is an order located in 50 different countries that goes back to the medieval era during the time when the Crusades protected their Christian pilgrims from being persecuted or killed while traveling to the Holy Land to worship. Back during the medieval era, many Christians were killed as they crossed through Muslim-controlled territories in their attempt to worship God.

Dr. Arnold’s new mission is to help heal and protect Christians worldwide. He will be travelling abroad to countries where Christians are under attack with a message of healing.

Dr. Arnold said, “Today, the Knights  Templar organization exists to protect and support Christians overseas. They also have a charter with the United Nations promoting peace throughout the world.” Each Knights Templar swears to die for their faith.

Dr. Arnold is a highly decorated U.S. veteran, having served during Operation Iraqi Freedom, where he was a flight surgeon and a combat medic.  Flipping a few pages from his military past, he said one of his patients during the war was an Iraqi prisoner. “We were looking at him. He was really thirsty. I told people not to jar him on the stretcher because it would cause him more pain. I was protective in that sense. He looked at me and asked for some water.”

“I looked into his eyes and saw fear, Arnold said. “He was afraid of what we might do to him. When I offered him a cup of water, he froze, his eyes steadfast on mine as if he didn’t trust me.

“So, I poured some water from my cup and drank it. He slowly drank the water, his eyes staying on mine. His body slowly relaxed. I could see in his eyes why are you trying to help me? That is what Christianity is all about,” Dr. Arnold said.

His message of healing will also be right here in the U.S., especially with all of the shootings and killings going on including in Chicago.

During the ceremony, Dr. Arnold talked about violence, particularly around what was at that time the upcoming Memorial Day weekend. “Just look at all of these deaths over the weekend…48 people shot, 11 dead. What kind of world do we live in,” Dr. Arnold said on May 22. “We’re moving toward Memorial Day. People gave their lives so you wouldn’t have to shoot people. We totally trashed that gift that we’ve been given to live peacefully in this country.”

“There are a lot of good people on earth, but sometimes we get bombarded by stories of gunshots, kids being killed in their living rooms,” he said. “We have to acknowledge that is wrong and make sure people know that is not the way to live. We have to start showing them examples of how to live,” Dr. Arnold said.

Reflecting on the turbulent times people are living in as it concerns COVID-19, deaths mounting world -wide, violence and racism on the rise, Dr. Arnold, who has traveled to 23 countries over his 26 years in the military, said, “It’s not so nice in many other countries, but the healing must be worldwide, including right here at home.”