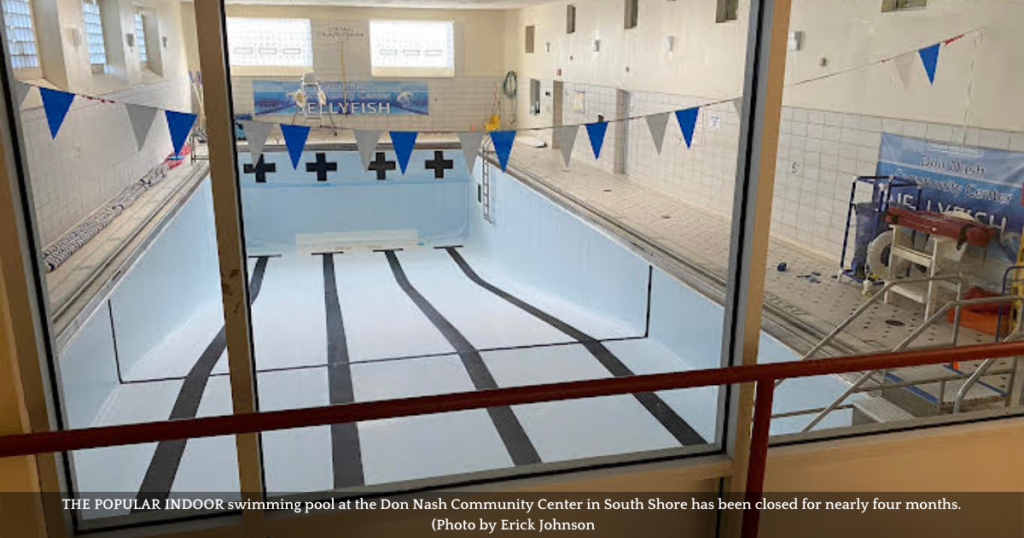 Dr. Saretta Sims, 63, who has been bringing her children and grandchildren to the Don Nash Community Center in South Shore for more than a decade.

Owned by the Chicago Park District, the center is located at 1833 E. 71st St. For over 60 years, the pool has helped the center remain an institution.

In the past year, Dr. Sims took water exercise classes while her grandchildren were taught how to swim in the facility’s Olympic size indoor pool.

For years, the pool has been busy with round-the-clock classes that offered everything from aqua cycling to lifeguard training to swimming, to parents, grandparents and children of all ages. The extremely popular aqua cycling class has a long wait list where guests wait years to get in. Several senior members held fundraisers to purchase specially designed $1,800 aqua exercise bikes for the class. Now, the expensive bikes are sitting unused in an aging men’s locker room that is in need of a long overdue renovation.

Many program participants at Don Nash Community Center are educated professionals who frequented the club for years; many members feel like family. Some live in the nearby affluent Jackson Park Highlands neighborhood.

But in recent years, the Center has fallen to time and neglect.

With outdated locker rooms and rust on doors and railings, the crumbling facility is over 60 years old and has not been upgraded since the Park District renovated the facility over 30 years ago, when it purchased the property from the Chicago Metropolitan YMCA in 1991.

But the pool has been the facility’s biggest money maker and attraction with its array of aquatics classes, bringing together seniors who enjoy socializing while working out in the pool.

Since August 24, the pool has sat closed and drained. Nearly 40 classes that were held in the pool have been canceled, leaving seniors with few options and nowhere to go. As many as 300 participants who paid to enroll in the classes have been affected by the closure.

Their health plans are on hold as the pool and its classes remain in limbo. Since the pool’s closure, the facility has been a ghost town with few to no guests using the center.

Some, including Dr. Sims, have written letters to Park District officials seeking updates on the status of repairs after seeing no maintenance men working at the site. Despite repeated questions from residents, the facility’s Park Advisory Council (PAC) and the Crusader, the Chicago Park District remains silent on the status of the pool’s condition and whether it will ever reopen.

“This place has helped me and generations of people in my family,” said Sims. “It’s a shame that it has been closed this long without no one giving us any answers.”

Sims, who lives in the Greater Grand Crossing neighborhood, said she learned about the pool after enrolling her son, Jalanni, in classes there several years ago. Now 18, Jalanni is a freshman at Morehouse College in Atlanta.

Sims said both of her children learned swimming skills at Don Nash, preferring the Center rather than the classes offered by the popular British Swim School at LA Fitness in Hyde Park.

“They learned more quickly with instructors at Don Nash than with the British Swim School,” Sims told the Crusader.

When Sims’ daughter went to college, obtaining degrees at Northwestern University and Cornell University, Sims said she became an empty nester. She enrolled in exercise classes at Don Nash, where she enjoyed interacting with other participants. She also enrolled her two grandchildren in the Tiny Tot swim classes. She paid over $200 for the swim and exercise classes.

On September 8, Sims received an email from Jayar Roberson, park supervisor at Don Nash, who told her that all fall aquatics classes at the facility were canceled due to a “pool maintenance issue.” Roberson told Sims that she would be notified by email once the aquatic program resumes.

The email didn’t say what caused Park District officials to close the pool, which was drained, and a sign was placed on an easel near the front entrance, which said the pool “is closed until further notice.”

Eager to return to water exercise classes, Sims checked every week for any updates on the pool. Sometimes she drove to the facility to ask when the pool would be repaired. After more than two months of no updates and answers, she wrote a letter to the Park District, expressing her frustration and displeasure at the pool’s closure and the lack of communication from top officials.

“It leaves me to wonder could this possibly be due to mismanagement of Park District resources, or funding inequities due to blatant discrimination,” Sims says in her letter.

“Is pool repair at the Don Nash Center considered a low priority by Park District decision makers? Are the repairs deemed unimportant because of the pool’s location and/or the color of the people who frequent it? The decision makers may not know or care that the effects of not maintaining and repairing the Don Nash Center swimming pool in a timely manner are far-reaching. It negatively impacts the physical and mental health of members and families that rely on the Center.”

Sims said she gave the letter to Roberson, who promised to give it to a Park District official.

Dr. Erin Adams, another concerned member and a biochemistry professor at the University of Chicago, also wrote a letter to Park District officials. In the letter, Adams requests a meeting with Park District administrators.

He also says, “the Don Nash swimming pool has been inoperable for over three months, further adding to the lack of available resources on the South Side (neighboring pools have also been closed either due to seasonal closures or from disrepair). The Chicago Park District has not provided a clear plan for its repair and opening.

“I stand with the Don Nash Advisory Council in their request to have these issues addressed.”

Park District officials have not responded to several phone and email inquiries from the Crusader, which on November 3 requested documents and maintenance records on the pool since 2021.

Many residents who exercise in the gym told the Crusader they have not seen any maintenance workers at the pool since it closed in August.

On Thursday, November 10, the Crusader learned that several maintenance workers visited Don Nash. One of the men was overheard telling an employee that the pool problem has “hit the media” and that’s why they were there. Another worker showed up to the site on November 14.

Internal emails from the Park District show a Park District official saying, “let’s blitz this as well,” when it came to repairs throughout the facility, amid the media scrutiny.

The email was sent to many tradesmen, including engineers, plumbers and electricians.

While District officials remain mum on the pool’s problem, sources told the Crusader that the pool’s motor broke after operating for decades.

Questions remain why the Park District has been slow in repairing the pool and neglecting other problems as well at the Don Nash Community Center.

During a visit to the facility, a Crusader journalist found rusty water fountains and a men’s locker room with outdated lockers made of old fiber plastic material. The expensive exercise bikes sat in the shower area taking up three spaces where they are usually stored after classes. The discolored grout on the pool deck looked unsanitary.

Sources say some employees have called on District officials to turn over the facility to a non-profit or rebuild a new one to replace the existing one that is crumbling. But with so many popular classes and community usage, residents question why Park District officials have not addressed the problem in a more timely and transparent manner. Some say the District doesn’t see the pool closure and related problems as urgent.

In 1982, the federal government cited the Chicago Park District, alleging parks in Black and Hispanic neighborhoods had fewer indoor facilities like pools and field houses, fewer outdoor amenities and few programming opportunities when compared to parks in white neighborhoods. The ruling led to a three-year consent decree giving a federal judge oversight of mandated reforms.

The Crusader has learned that many parks on the South Side are in worse shape than the Don Nash Community Center. At Rosenblum Park, five minutes away, that facility’s indoor pool is also closed for unknown reasons.

But residents bemoan the continued decline of the Don Nash Community Center. It was named after Donald Jordan Nash, a community activist and beloved friend of the Park District.

He joined the Coca Cola Company in 1962 as a route helper, rising through the ranks to become the company’s first Black executive to serve as the company’s vice president of community and governmental affairs. A native Chicagoan, Nash demonstrated a great commitment to children in Chicago Park District programs, volunteering as a mentor and teacher in his spare time.

Before it was a community center, the facility was a YMCA, built in the 1940s. The Chicago Metropolitan YMCA closed the South Shore facility after it opened the $10 million South Side YMCA at 63rd and Stony Island in 1990.

Amid concerns of low-income neighborhoods lacking parks and gyms, the Park District purchased the old South Shore YMCA in 1991. Little renovations were made to the facility, which includes a gymnasium, indoor pool, fitness center and multi-purpose rooms. Some still call the facility “the Old South Shore Y.”

Dr. Sims said she was told she would get the $212 she paid for the classes refunded, but her biggest concern is the future of Don Nash Center’s swimming pool.

“It’s such an important resource in the community. Why are they [Park District] not seeing this as an urgent problem?”

After this story was published in the November 19, 2022, issue of the Chicago Crusader Newspaper, Michele Lemons, a spokesperson for the Chicago Park District, gave this update:

The pool is closed due to a malfunctioned part.  I’m checking with our facilities team to confirm the status of repairs.  I’ll circle back with you as soon as possible.