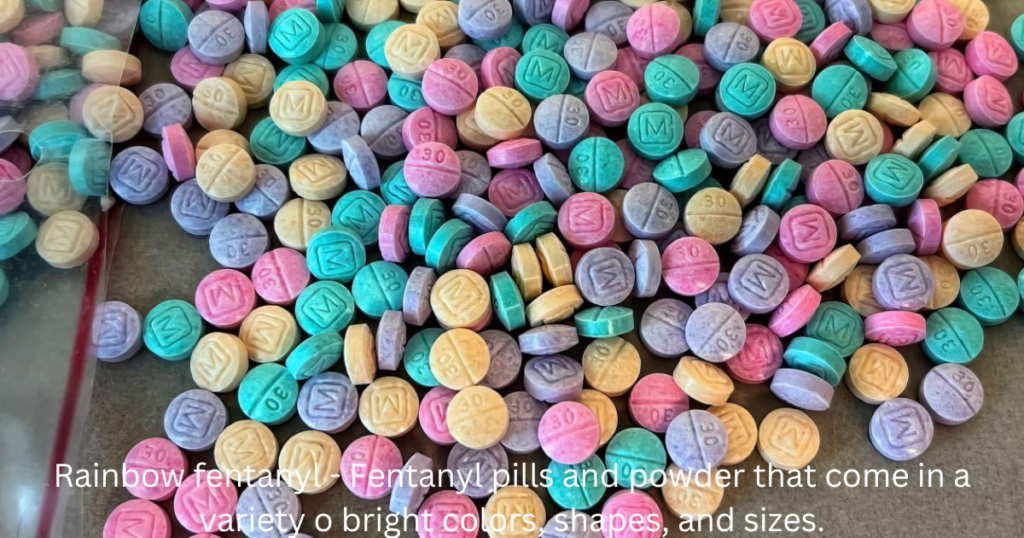 Just ahead of Halloween the U.S. Drug Enforcement Administration (DEA) is alerting the public about an alarming new influx of colorful fentanyl that is surging across the United States.

Since August of this year, the DEA has reported brightly-colored fentanyl and fentanyl pills dubbed “rainbow fentanyl” in 26 states. These potentially deadly pills are highly addictive and are made to look like candy.

Fentanyl is an extremely potent synthetic opioid.  Just two milligrams of fentanyl, which is equal to 10-15 grains of table salt, is considered a lethal dose.

The DEA calls the colorful pills a deliberate effort by drug traffickers to drive addiction amongst kids and young adults, and with Halloween and trick-or-treating right around the corner, the emergence of these candy clones has some parents on edge.

Storm says parents shouldn’t panic at the thought of their kids getting fentanyl in their candy bags. He points out – drug users are not likely to give away narcotics that have cost them money or are worth money. Storm does say parents should remain vigilant, however, and look through kids’ candy to make sure all pieces are wrapped and undamaged.

“What I would recommend is a parent go through your kids’ Halloween treats if they go out trick-or-treating and inspect them just like we did years ago with [the threat of] razor blades in apples or razor blades in some other types of hard candy. Inspect it and make sure that they haven’t been tampered with. If they tried to slip, say [drugs that look like] Skittles into a Skittles package, the package is going to be torn or there’s going to be some type of defect in that package,” he says.

More concerning than trick-or-treating, according to Storm, is kids coming across this brightly colored fentanyl in their day-to-day lives, believing it’s candy and consuming it. He says the best way parents can protect their kids is by having open communication about drugs, their dangers, and the importance of never consuming anything without knowing exactly what it is.

“Be aware of it and have those conversations, with not only the younger child but also the older siblings, because there is a risk that if they do use it and they buy it, then they drop it on the ground, a small child may pick it up thinking it’s a Skittle candy and actually consume it and that could be fatal,” warns Storm.

Additional resources for parents and the community can be found on DEA’s Fentanyl Awareness page. Brightly-colored fentanyl is being seized in multiple forms, including pills, powder, and blocks that resemble sidewalk chalk. If you encounter fentanyl in any form, do not handle it and call 911 immediately.