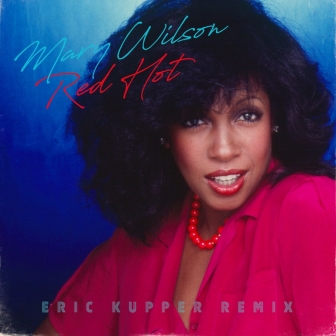 As the summer season comes to a close, dance clubs across the country are heating up to the fiery release today of “Red Hot” by top remixer Eric Kupper. Inspired by the original version found on Mary Wilson: Expanded Edition (Motown/UMe), the album from legendary artist and founding member of the Supremes Mary Wilson, “Red Hot (Eric Kupper Remix)” EP is available here.

The release continues the stellar legacy of Mary’s incredible solo career as an author, philanthropist, cultural ambassador, activist, singer, songwriter and entertainer. In time for what would have been Mary Wilson’s 77th Birthday, March 6, 2021, the release of Mary Wilson: Expanded Edition, available here, was announced to celebrate her birthday and honor her history and legacy with the first of her album projects. Sadly, the world mourned Mary’s passing just weeks before the expanded edition was to be released.

The original album was released by Motown in 1979, and “Red Hot” was the obvious lead single. Just prior to the original album release, the infamous Disco Demolition Night took place at Comiskey Park in Chicago on July 12, 1979. The “Disco Sucks” movement impacted the release of Mary Wilson, and the single reached #85 on the dance chart and #95 on the R&B chart. Mary Wilson: Expanded Edition retrieves for history the song’s rare 12” and 7” mixes, which were unique from the album’s version. Despite being loved by fans, and the release of a second single, “Pick Up the Pieces” in the U.K., the Mary Wilson album did not get the recognition it deserved at the time. Now, Mary Wilson’s music and contributions are being rediscovered.

Eric Kupper, whose remix projects include an incredible list of music stars across all genres and success with more than 120 dance hits including, most recently, four consecutive #1’s, now brings Mary Wilson’s “Red Hot” to a new generation of dance music fans.

Mary Wilson was the co-founder of the original Supremes, along with Diana Ross and Florence Ballard, which signed to Motown in January 1961, making this year their 60th anniversary. The group broke down barriers by becoming the world’s most popular female singing trio, including an unprecedented string of 12 #1 hits and the first #1 album for a female group. Her post-Supremes projects spanned solo recordings, television appearances, published books and philanthropy.