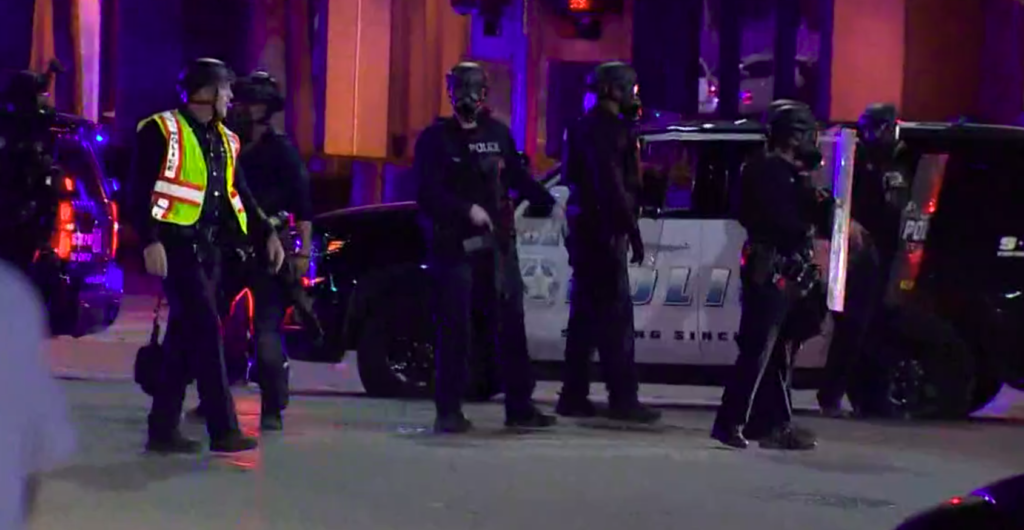 The Dallas Police Department announced that two officers were expected to turn themselves in to the sheriff’s office after warrants for their arrest were issued in connection to their actions at protests in 2020.

A Facebook post from the Dallas Police Department said Wednesday that warrants for the arrest of Senior Corporal Ryan Mabry and former Senior Corporal Melvin Williams had been issued.

The officers were charged with multiple counts of aggravated assault with a deadly weapon and official oppression, according to a release from the Dallas County District Attorney’s Office.  The officers allegedly shot or assaulted civilians during protests that erupted in downtown Dallas over the police killing of George Floyd in 2020.

Mabry is on administrative leave until an internal investigation is completed, and Williams was terminated last month for a different violation of the department’s use of force policies, police said.

Williams was recorded punching a man in Dallas in 2021, prompting his firing. At the time of his termination, he was also under investigation for two other alleged use of force incidents.

“Melvin was trying to break up a violent, drunken brawl in the middle of the street in Deep Ellum. He used lawful force in dealing with a combative suspect,” Robert L. Rogers, an attorney for Williams, said in a statement to The Hill about the 2021 incident.

Regarding the more recent charges, Rogers said that Williams and his SWAT team “were only called into action once the protests had turned into violent riots” and that his client “now faces absurd criminal charges for lawfully targeting individuals that were clearly agitators.”

“These incidents involved here were not peaceful protests by any means,” Toby Shook, an attorney for Mabry, said to The Texas Tribune, adding that the officers “had a duty to suppress these riots or unlawful assemblies of folks to protect lives and property, and that’s what they did.”

The Hill has reached out to Shook for comment.
This article originally appeared on TheHill.