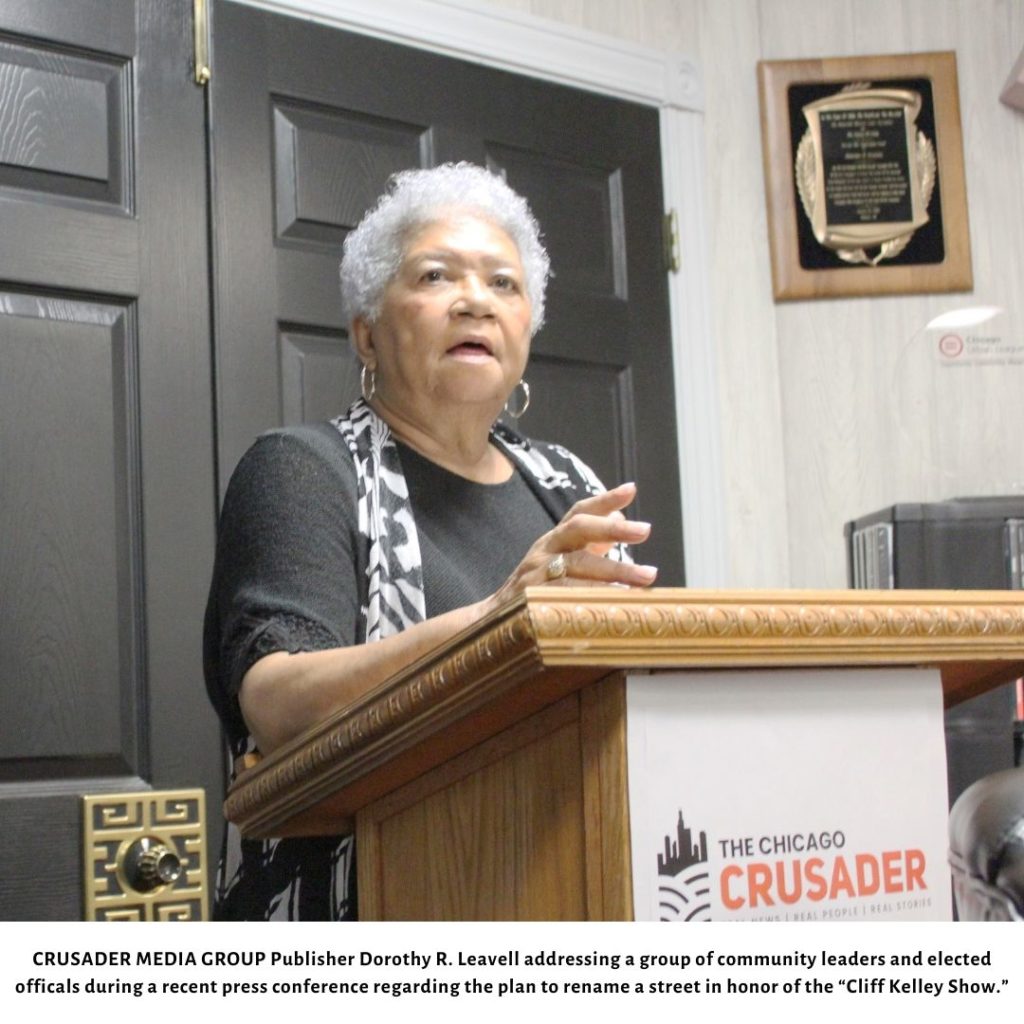 During a press conference held at the Chicago Crusader office, 6429 S. King Dr. on Friday, May 20, Leavell cited city officials’ explanation that a street sign cannot be erected if a person is still living. “Black Chicago and WVON wouldn’t be what it is today without the pioneering efforts of the “Cliff Kelley Show,” she noted.

Calling Kelley an “icon, an institution” in the Black community, Leavell said Kelley is loved, respected and appreciated “for the contributions he has made in our society.” Leavell said the effort to acquire honorary street signage for Kelley has become a “movement. He has contributed so much to our society.

“How can you not make sure that for generations to come, that people remember we have among our midst…an icon” she remarked, who kept the Black community informed on current issues. Because of Kelley’s advocacy and forthright commentary, Leavell said, “We were galvanized to help make things better for all of us. “Any accolades, honors he has not received certainly he deserves to have a street named after him.”

Davis reflected on his mother who used to tell him, “Give me my flowers now. Why wait until I’m dead?”

“What we are trying to do is to make sure that Cliff Kelley gets some flowers right now, while he is living.

“I also remember that he was a soldier, a hero, a worker all of the time,” Davis said. “I served in the City Council with Cliff, and I always looked to hear what Cliff had to say. Cliff was a guy who was a part of organizing politics, but an independent.”

Davis told the story of how he and Kelley would joke about the late Cecil Partee, who was the former president of the Illinois State Senate and Cook County State’s Attorney. “Kelley and Partee would be together one week, then they disagree, and they put Cliff out of the organization.

Davis was close to Partee because they came from the same state, Arkansas.

“When Cecil Partee left Arkansas to go to school, it was because they wouldn’t admit him into law school in Arkansas. All those states had laws that said we will not accept a Black person in our graduate or professional school, but if you can get in somewhere, we will pay your tuition. That is how Cecil Partee managed to go to Northwestern. The state of Arkansas paid the tuition,” Davis revealed.

He said Kelley’s “American Heroes” program is broadcast all over the country” and that a street sign honoring Kelley would be in order.

Father Pfleger echoed Davis’ assessment of Kelley saying, “It is important to recognize and appreciate people while they are alive and not after they are dead …. Cliff Kelley is an icon in this city. He has been a voice of conscience. I think he has been a voice of truth. He’s raised questions.

“He was an informant to the Black community, to all, because everybody around the city, particularly elected officials, wanted to tune in to see what he was talking about, to know the views of people in the African American community,” Pfleger said of the legendary talk show host.

“What I loved about him was that he didn’t care what people thought about him. They agreed with him, disagreed with him, but he was true to who he was. He believed in what he believed in, and he stood by it no matter who was with or not with him,” Pfleger said. “His consciousness, his demanding questions and answers were a force.”

Referring to when Kelley was an alderman, Pfleger said, “He was a stronger force even outside of the City Council. It was the Cliff Kelley Show you wanted to listen to.

“I think it is important that we have this street sign dedicated to the Cliff Kelley Show to honor Cliff for what he did and to remind us that what he did is still important today.

Supporters agree that what Kelley gave during his 25 years with WVON and continues today with his weekly veteran’s program, is a consciousness of issues and policies affecting the Black community.

“We need someone like Cliff to ask the hard questions and demand some answers. I think the Cliff Kelley Show street sign would be important to him and important for the city of Chicago,” Pfleger said.

Senator Hunter said she and Kelley reside in Washington Park and he has been “a major force not only in the 20th Ward for more than 40 years but he has been the force in the city of Chicago. He played an instrumental role in helping to getting Washington elected as mayor of Chicago.

“Whenever there was some confusion in the Black community, Cliff brought them on his show and clarified the rumors circulating out there with the accuracy of his own research as well as the speakers he brought on his show,” said Hunter.

She promised to work with the committee to ensure that the City Council recognizes the Cliff Kelley Show and not just Cliff Kelley the person, “though we know who and what he stands for. This is history, and we need something sustainable in the community and that street sign will make that happen,” Hunter said.

Read, an Air Force veteran, also supported the street sign movement. He talked about spending more than 30 years working with the late activist, Lu Palmer. He was Palmer’s driver and often attended meetings with Kelley. He said Kelley “is in the best tradition of the Griot…the storyteller in the Black community. Continuity is what it is all about.”

Former Illinois Deputy Governor Louanner Peters said, “The fact that we have to make this a movement is sad in itself.

“The contributions that Cliff Kelley and the Cliff Kelley Show made to this city should not require a movement in order to get recognition.

“That tells us where we are today, and it is not a good place. It’s just wrong; so, we have to pick up the battle axe and go at it again. We need the recognition of this show and Cliff Kelley’s contributions in order to bridge the gap.

Glenda Smith, Kelley’s executive producer, said city officials told her, “You have to be dead to get a street sign after 2017; so, we’ve been trying to get it for two years. Honorary signage as The Cliff Kelley Show would allow the technicality of it being an institution.”

There were similar street unveilings of notables still alive. In February 2013, there was an honorary unveiling of the “Dr. Timuel Black” sign for 94-year-old Timuel Black at 50th and State Street. He died on October 13, 2021, at the age of 102.

An even greater acknowledgement and honor perhaps was presented when activist YHWnewBN asked, “Why can’t we have a Cliff Kelley Day on his birthday?”