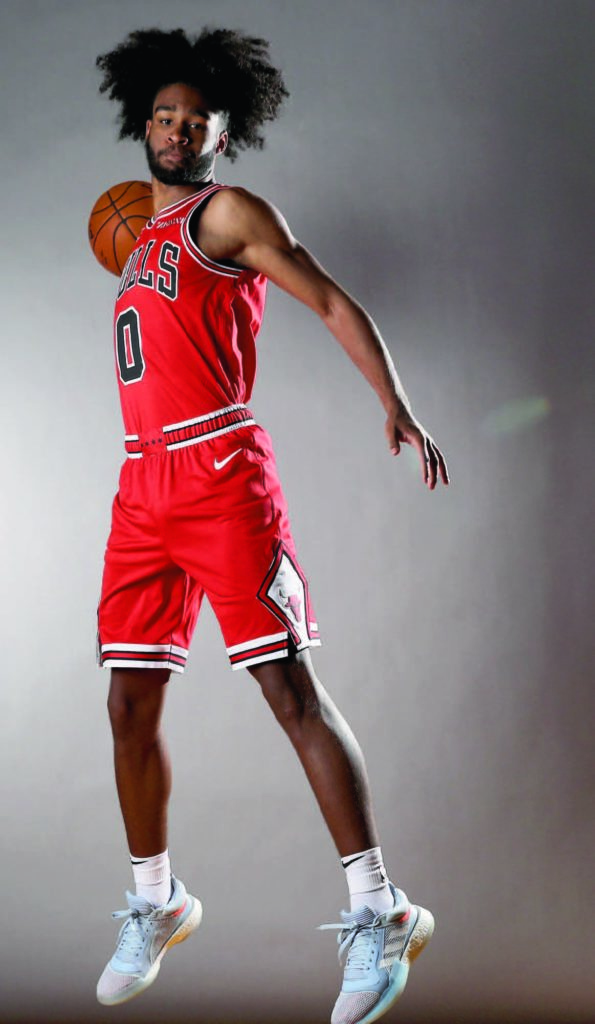 In day three of the Chicago Bulls 2019-2020 NBA Training Camp, the Chicago Crusader sat down with Bulls rookie sensation Coby White on  Wednesday to talk some hoops, adjusting to a new culture and life-style of being a professional basketball player, and his current basketball relationship with all-star point guard Chris Paul.

“I’m just trying to get more and more comfortable with the system, the players, and the personnel,” said White, “I feel like I’m getting better each and every day. I know it’s a process and things may not go the way you want it to.

(But at the end of the day) I’m just trying to stay consistent.”

White said after wrapping up his practice session on Wednesday afternoon at the Advocate Center, that he is willing to play whatever style Bulls coach Jim Boylen wants him to play.

And over the last two practices, Boylen has encouraged White to stay in attack mode, in preparation to help run his team’s “new run and gun offense” for the 2019-2020 season.

With the seventh pick of the 2019 NBA Draft, the Bulls selected White out of the University of North Carolina.

And the last time the Bulls drafted a guard out of the University of North Carolina who measured near 6′ foot 6″ in height, he could dunk a basketball from the free throw line, had the uncanny ability to hit game winning shots, was clutch beyond clutch in clutch situations, not to mention he was “bald,” wore the number 23, and helped set the world on fire.

But White paused for a minute during the interview and stated, “I’m no Michael Jordan,” said White. “There’s nobody better than him.”

“[He has a] solid mid-range game with a nice pull-up jumper,” scouts said.

The lightning quick 6’5,’’ 185-pound combo guard with an aggressive scoring mentality, and an unselfish passer with the ball on the floor, with time…, will possibly have NBA defenses game planning against him and his multifaceted offensive skillsets in the near future.

In addition to great floor vision, White is also known as a shifty player with an excellent first step. Which consistently allows him to blow past defenders in a blink of an eye. White, in his first year, will look to add an additional scoring punch to the Bulls’ back court. With running mate and future NBA rising star Zach Lavine, for the 2019-2020 season.

White will also compete with Bulls point guard Kris Dunn for the team’s starting point guard position. And with the addition of Czech National Basketball team’s star Tomas Satoransky during the off season, the Bulls will have a “three-man-trio” solid point guard competition heading into training camp.

White, who is also known a versatile scorer, can actually score from anywhere on the floor (this includes creating his own shot off the dribble, in addition to any catch and shoot situations according to scouting reports), will look to bring his 16.1 points per game from UNC and his potent free throw average of 80 percent from the line to the Bulls roster.

In addition to his ability to score the ball from anywhere on the floor and being an excellent free throw shooter, White also moves well without the basketball.

He credits veteran Chris Paul, a former all-star and current starting point guard of the Oklahoma City Thunder, for both mentoring and encouraging him during the off season.

“He tells me to take it one day at a time and that it’s a process,” said White, about Paul’s word of advice and encouragement to him during the off-season. “Just continue to grow and get better,” said Paul. “And you will find your way.

Everything is not going to be perfect. But you will find your way, and everything will work out for you (in the end).”

As a first year NBA player, White says he doesn’t have too many goals.

And no matter what role he has earned or is assigned to play during the season, he just wants to win.