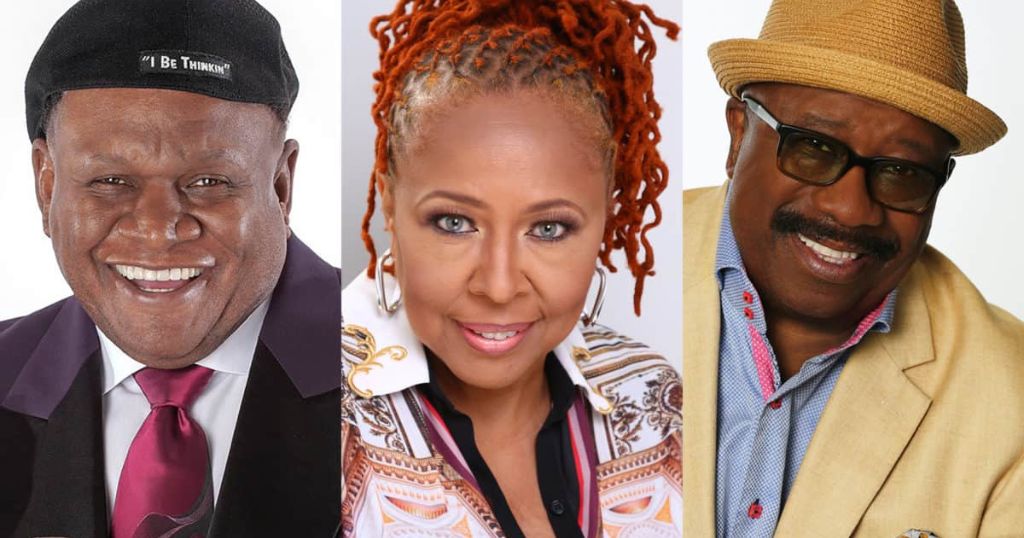 The Man, The Comedian, The Legend. George Wallace is back, together with his friends, the fabulous Myra J. and the hilarious J. Anthony Brown for two nights only at Riddles Comedy Club in Chicago, August 19 and  20.

I first met and worked with George and Myra J. back in my WGCI days. I met J. Anthony Brown later. All three continuously keep me in stitches.

Recently, I spoke with George and as you will see the man cracks jokes even when he is serious. I reminded George of when he went to Brazil with us when Banks and Company broadcast live from the beaches of Rio.

“It’s the most awesome sight I’ve ever seen in my life, and to this day I love traveling. I was up there with Christ, that’s how high. This is 12 times higher than the Empire State building, above sea level in Brazil, and I was with Christ. Five hours later, I was back down on the beach with those little pretty girls taking my credit card. You ever seen those Brazilian girls? I was pretty bad back then.”

I asked George about his upcoming Comedy Royal Triple Threat show, and off he went.

“I’m coming to Chicago, Friday and Saturday, August 19 and 20. Not only me, it’s going to be the old Tom Joyner Morning Show. Myra J and J. Anthony Black. Is that his last name?”

George went on to say, “Well he’s Black today. We’re going to have some fun, and we hope we get to talk about each other’s mother. We don’t do that, and people get angry with us. Can you believe that?

“You don’t want to talk about each other’s mom?” I said, “We have new things, we moved on, and I just can’t talk about his mom anymore, even though I’m already Christmas shopping for her. I want to stop it, because I can’t continue to do it.

“People go crazy, and people say they don’t get out of the car when we used to do Tom Joyner. They’d say, “We have to wait till y’all finished.” But we’re coming to Chicago, Myra J., myself, J. Anthony Brown, and we’re going to be in Islip. Over there where all the dead people are. Islip? Islip? Alsip.”

We laughed through the entire time. Most of the conversations I can’t put in writing. You will get the chance to laugh till your sides hurt on Friday and Saturday, August 19 and 20. Showtimes are 8:00 p.m. and 10:30 p.m. You can go to riddlescomedyclub.com. It’s in Alsip on West 111th Street.

Of course, George had to have the last word.

Until next time, keep your EYE to the sky!!!