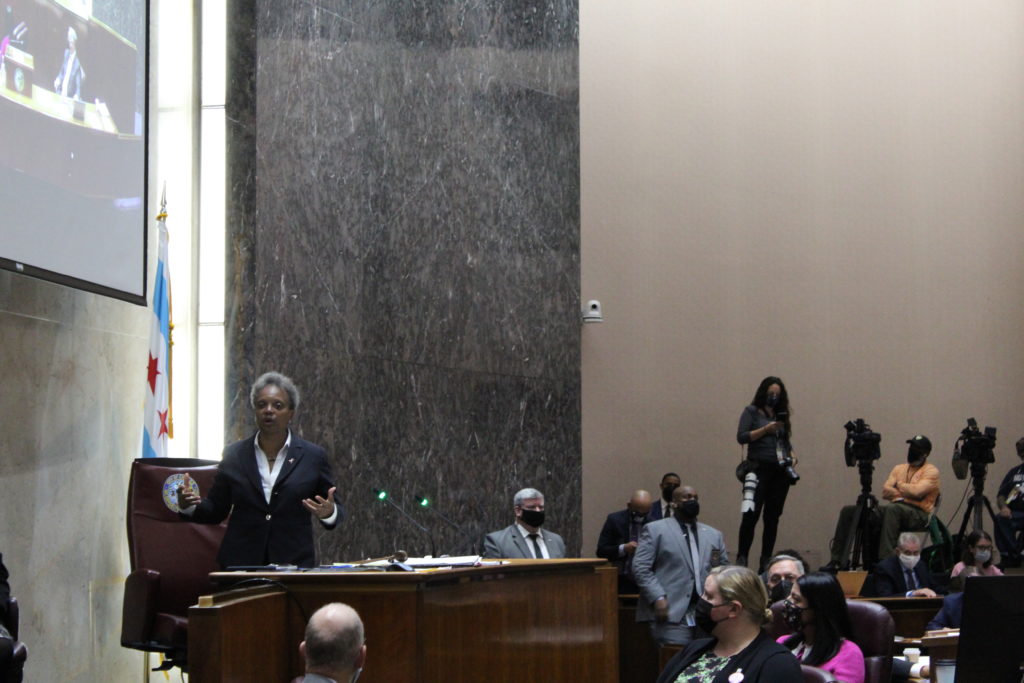 Rev. Jesse L. Jackson, Sr. received a standing ovation Wednesday during the City Council meeting when Mayor Lori Lightfoot and the aldermen passed a resolution honoring his 62 years in the civil rights struggle that has helped to increase the number of black elected officials, increase voter registration and opened the doors for people of color in corporate America.

Accompanied by his son, Jonathan, and daughter, Santita Jackson, Rev. James Meeks, Bishop Tavis Grant, Rev. Will Hall, Rev. Cameron Barnes, Rev. Janette Wilson, Omar Shareef and his Rainbow PUSH Coalition staff, Rev. Jackson received a standing ovation after a number of tributes were made praising his dedication and consistency to the civil rights movement that has helped many blacks win elections across the nation and give hope to millions around the world.

In praising Rev. Jackson, who began his civil rights battles at the age of 18 when he and seven other black students successfully integrated a downtown Greenville, South Carolina library, Mayor Lightfoot praised Rev. Jackson for his fight for the right to vote and for understanding the importance of diversity and how those differences make this city strong.  “For that, we owe you a debt of gratitude,” she said.

Referring to Rev. Jackson’s mantra, “I Am Somebody,” Mayor Lightfoot said, “It’s just not a phrase. It has given all of us incredible strength to recognize that no matter the circumstances into which we were born, that we have the right to expect the best that God has given us. You have shown us that way, and we are very grateful.”

She praised Rev. Jackson for including youth in his program and his work in corporate America and Wall Street. “You have opened up doors of opportunity not to just a pittance in charity, but real jobs, real investments that have made a magnificent difference in the lives of so many.” She said Rev. Jackson “paved the way for us all over the world, in this city.”

Ald. Stephanie D. Coleman (16th) remembers being taken to the Rainbow PUSH Coalition headquarters and how “you made me know through these years that I am somebody. Because of you we were able to feed thousands.” She thanked him for bringing food in the “freezing cold” to her ward. She thanked Rev. Jackson’s family for sharing him with the nation. “Deep down in my heart, I still believe that we will overcome one day.”

Ald. Roderick Sawyer (6th) remembered meeting Rev. Jackson as a child. His father, then Ald. Eugene Sawyer (6th), introducing him to Rev. Jackson who hugged and kissed him. He talked about Rev. Wilson asking him to do some work with “people who were cast out.” “I learned so much about black love, men getting together, be strong…. Because of that work, we were able to get gang violence down by almost a half working together.”

Ald. Pat Dowell (3rd) said, “There is no civil rights movement in Chicago without the work, sacrifice, vision and leadership of Dr. Rev. Jackson.” She thanked Rev. Jackson for continuing the fight for civil rights.”

Ald. David Moore (17th) said he learned about fighting for civil rights from Rev. Jackson. He praised Rev. Jackson for fighting for diverse boardrooms across the nation and his consistent fight for “democracy and justice regardless of person’s race, ethnicity or gender.” 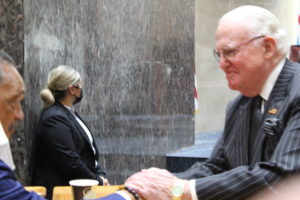 Ald. Edward M. Burke (14th) reflected on a City Council meeting in 1999 when the aldermen for the first time voted to award Rev. Jackson with the Chicago Medal of Merit. Burke talked about Rev. Jackson’s securing the release of U.S. Navy Lt. Robert Goodman whose plane was shot down in Syria in late 1983. “It was Rev. Jackson who negotiated with ( then Syrian) President Hafez al-Assad” and other releases of other political prisoners.

In dealing with one dictator in getting prisoners freed, Ald. Burke got a laugh from the aldermen when he said that “was easy. It was (former Ald. Edward R.) Vrdolyak and Burke who gave him trouble.”

“Here we are today to wish you happy (80th) birthday and all that you have done,” Burke said. “May God continue to grant you health and strength and thank you for the friendship that you have extended to all people especially to Travis,” he said referring to his adopted African American son. Rev. Jackson extended his hand to Burke.

Ald. Walter Burnett (27th) remembers Rev. Jackson saying, “Up with hope, down with dope…I Am Somebody.” Those were words Burnett said he heard around his neighborhood—words of inspiration and hope. He praised Rev. Jackson for “opening up so many doors for people even in the media because of your leadership.” Burnett thanked Rev. Jackson “for inspiring so many people not just in the city of Chicago…but people all around the world…. We appreciate your legacy and all of the things to come you do for us….” 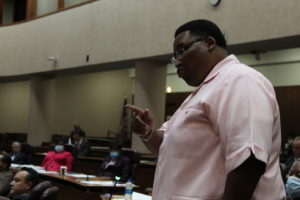 Referring to Rev. Jackson’s running twice for the presidency in 1984 and 1988, Ald. Jason Ervin, (28th), said, “No one committed the possibility…that’s the winning until you stepped up. Nobody created the hope that we could be greater than what we are, where we are today until you stepped up. You created so much possibilities, no much hope.”

Referring to the first time he met Rev. Jackson, Ald. Ervin said it was when Rev. Jackson was with NBA star Isiah Thomas and his mother. “We were at a basketball game back in the 1980’s. I remember just feeling like something came over me but being around such a man of greatness again creating the possibility of being something greater than what you are.

“So, today, we say thank you for your life’s work…for all the nights you spent away from family to help us as a people in this city. All we can say to give your flowers while you are living is to say thank you for opening the doors for corporate America to the brothers on the West and South sides of this city.

“Thank you for standing in the gap for everybody because there should be so many people lining up around this building just to say thank you,” said Ervin. The alderman thanked Rev. Jackson for fighting for promotions of black policemen and standing with the Afro American Patrolman’s League.

“It is the possibility you created,” Ervin said. “Without you there is no Barack. Without you, there is not a whole lot of other folks; so thank you…. You are the man….”