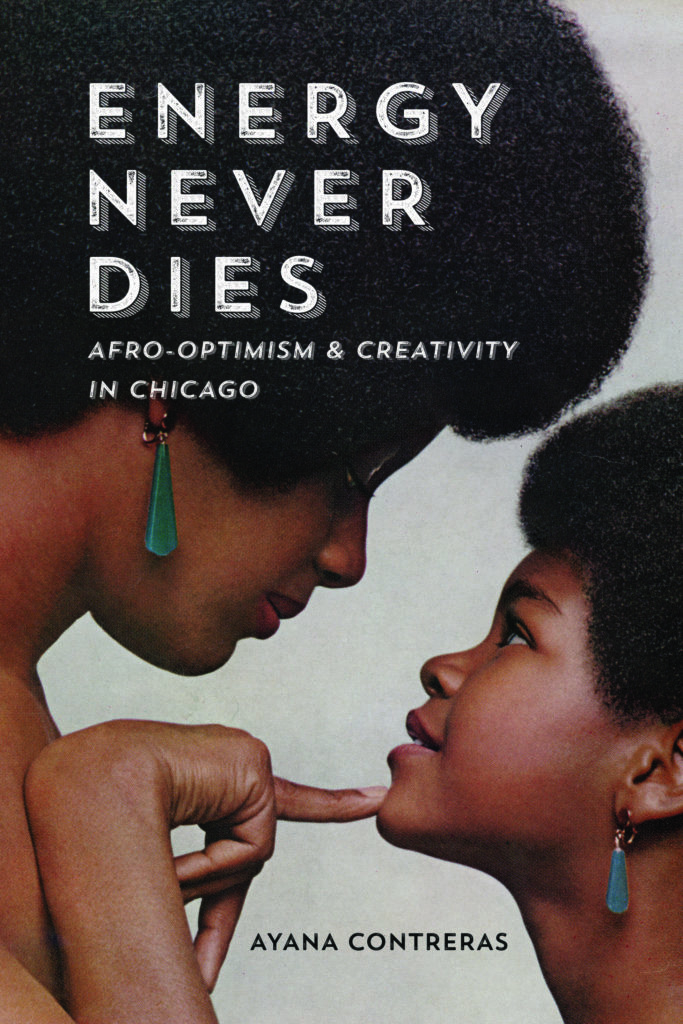 From Afro Sheen to Theaster Gates, and from Soul Train to Chance the Rapper, Black Chicago draws sustenance from a culture rooted in self-determination, aspiration, and hustle. Contreras embarks on a journey to share the implausible success stories and breathtaking achievements of Black Chicago’s artists and entrepreneurs. Past and present generations speak with one another, maintaining a vital connection to a beautiful narrative of Black triumph and empowerment that still inspires creativity and pride.

Contreras lyrically weaves a hidden history from these true stories and the magic released by undervalued cultural artifacts. As she does, the idea that the improbable is always possible emerges as an indestructible Afro-Optimism that binds a people together. It’s this local “energy” that was urgently needed and that is evident in constructs today—many decades after their origins.

In chapters with vibrant titles such as “On Stony Island Avenue: Boulevard of Black Culture,” “Found: Grooves Ghostly White” and “Visions of Soul: Afro Sheen, Soul Train and Black Chicago’s Close Up,” Contreras examines the struggle and resilience that created our history—one that was emulated across Black America and beyond.

And while some other writers have written about the supposed rivalry between new arrivals to Chicago’s West and South sides during the periods covered in the Great Migration, Contreras talks about both sides of town—not in terms that are sad or otherwise lacking in vibrancy—but in a soulful way that highlights the contributions of these neighborhoods.

There’s Leon Finney and Leon’s Ribs, the Regal Theater and the different clubs on the South Side that were popping in the 1970s, with hit artists coming to town with their performing acts. The Soft Sheen mansion in Chatham represented a Black hair care line that revolutionized the “Afro” across the nation—with products such as Afro Sheen.

Then there is the cool of Oscar Brown Jr., and the award-winning, culturally specific prose of Gwendolyn Brooks. The music of Curtis Mayfield and two of his hit songs, “Only The Strong Survive” and “We Got To Have Peace,” could serve as rallying cries for the heartbeat of Black Chicago. Our struggles have been many, but we still persevere.

Contreras says the West Side is still trying to raise its head up from the 1968 riots, which protested Dr. Martin Luther King’s assassination on April 4. “The West Side is a glorious boxer that is still fighting, scuffed gloves on guard. Knocked down by factory divestment in the third and fifth rounds. Still pushing, still hustling,” she writes.

On the day of Dr. King’s funeral, rumors of rioting surfaced, and news anchor Warner Saunders, who was the director of the West Side-based Better Boys Foundation, and DJ Holmes “Daddy-O” Daylie started a TV program called “For Blacks Only” that ran for 11 years. This started a fresh trend of positive Black programming in the city. Also, during that time, Contreras writes, that Blues man Otis Spann, who ran a small storefront on the West Side, recorded a tribute to Dr. King titled “A Tribute to Martin Luther King” on the Cry record label.

Contreras, who is a former DJ herself, worked on the “Barbershop Show,” which was hosted by iconic Chicago radio host Richard Steele and broadcast for years from the Lawndale neighborhood.

On the political realm, Black Chicago ushered in the events that made it possible for the United States to elect its first Black President Barack Obama in 2008. As well, politics in Chicago also brought forth the first Black female Senator with Carol Moseley Braun, who represented Chicago from 1993 until 1999. And Jesse Jackson’s familiar chant “I Am Somebody” can be heard by people of color around the globe.

Whether it is politics, food, music, or Black cultural or financial institutions that catered to Black wealth in a time when these things seemed improbable, the “energy” that was borne in Chicago is an energy that is forever present across the country and globally.