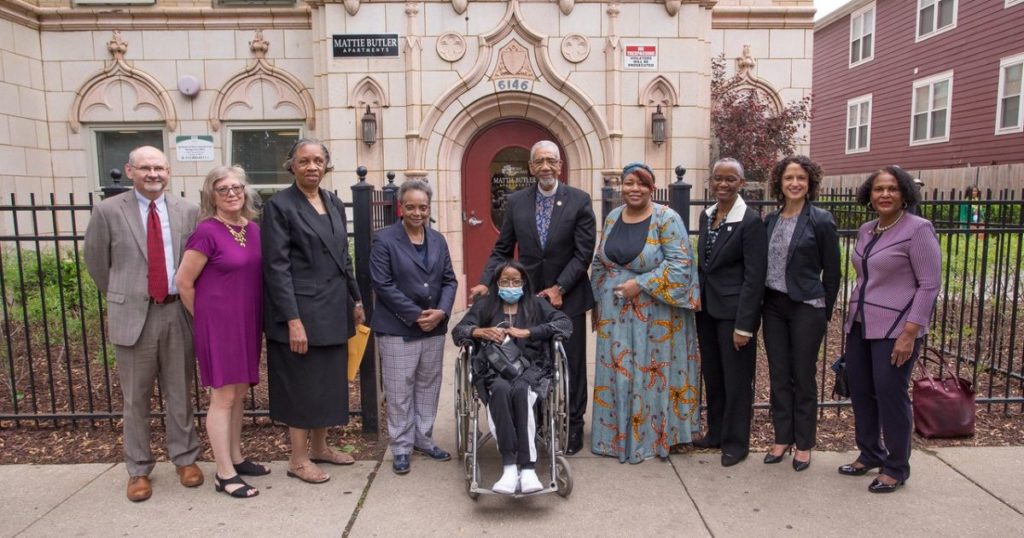 Woodlawn was once neglected, disinvested, and considered a dangerous south side Chicago area beset by violence, and filled with at-risk, in need of repair properties. But a determined, fierce neighborhood advocate, Mattie Butler, stood tall, confronted, challenged, and changed the prevailing deceptive narrative with her community building and investment efforts. Throughout her life, the indomitable warrior fought for social equality and housing affordability for marginalized residents.

Originally raised in a close-knit family in the Cabrini-Green housing development, with her parents and four siblings, she learned early the power of unity in action. The grandchild of Mississippi sharecroppers never imagined becoming a pivotal influence to uplifting Chicago’s under-resourced south side Woodlawn neighborhood, while preserving affordability for local residents.

“I’ve been blessed to use my skills and partnerships to help revitalize and rebuild low- and moderate-income areas in Chicago, serving impacted individuals, working families and seniors who most needed the foundations of strong, viable communities,” said Butler.

In her late teens, Butler worked several jobs at the YMCA before joining her talented brother,  famed R&B vocalist (and retired Cook County Commissioner) Jerry “The Iceman” Butler, once lead singer for the Impressions R&B group, as part of his entourage of background singers.

Mattie Butler recalls embracing a simple, yet profound philosophy she learned from her parents: “Everything you do, always perform with all of your heart and might. Please don’t do things halfway, because then they are never done right.”

Many of us grew up and often heard our elders declare, “Give me my flowers and accolades while I can enjoy and remember them.”

Recently, Mattie Butler was the surprised and elated beneficiary of such an effort because whatever she’s done for others, it’s always done exactly right. Butler was recognized for vital contributions to the same Woodlawn community, during her more than 45-year residency. Two newly renovated affordable rental apartment buildings were named in her honor.

During the observance the Chicago-based non-profit developer, Preservation Of Affordable Housing (POAH) announced they recently renamed two of their multi-family Woodlawn properties as the ‘Mattie Butler Apartments.’

The event was held at 6146 S. Kenwood Ave. The other property is at 6230 S. Dorchester Ave. Butler previously owned these buildings. Her nonprofit, Woodlawn East Community And Neighbors, Inc. (WECAN) which creates opportunities for thousands of local residents, saved them from demolition years ago.

Butler started WECAN following a series of deadly, arson-related neighborhood fires in the ’80s; one fire tragically killed over a dozen children on her block. WECAN advises and protects Woodlawn residents from danger and exploitation.

Congressman Bobby Rush who has partnered on grassroots initiatives with Butler and WECAN for years, laughingly recalled, “Over the years, as an activist, former Black Panther, Chicago Alderman, and U.S. Congressperson, I’ve confronted formidable high-profile and little-known opponents. However, I admire and refuse to tangle with Mattie Butler. She has a deceptively warm and sweet demeanor – at first. She’s always armed with irrefutable facts, figures, and contingents of devoted supporters, remaining staunchly unafraid. Mattie’s a strong social advocate, a modern-day Harriet Tubman. I will always respect that.”

Taylor said, “This makes Ms. Butler’s activism and work so very important, especially during today’s resurging housing instability and inequity among some segments within the Woodlawn area.”

Said Shelley, “What’s needed most is continued collaboration between various organizations, public and private agencies, the government, and concerned people committed to amplifying the urban fabric of Chicago for the betterment of all.”

Appropriately, Butler was recognized for fighting to preserve housing affordability prior to the official start of National Homeownership Month, celebrated every June.

“This is a momentous day in Chicago. Today we gather, saluting the selfless service of one of this city’s affordable housing heroines – – my mother, Mattie Butler!” enthused Butler’s daughter, Venus Scott. “This gentle, yet fierce female giant has promoted fairness in jobs, education, youth services – – and equity in housing, with stunning success!”

Acclaimed Black author James Baldwin once expressed: “Your crown is already bought and paid for…All you must do is put it on your head.”

Mattie Butler’s crown of successful achievement rests comfortably and regally on her deserving head. Equally important, she’s alive to receive it. Grateful Woodlawn locals believe it will forever stay there. She’s always stood for them. A few days ago, they returned the favor, standing united to praise and illuminate her altruistic, benevolence. What a profound living legacy.