Walmart is one of the corporations that decided after the events last year to do more to right the wrongs created by centuries of social injustice and inequities. The goal being to bring more equity and inclusion to people and cultures marginalized for far too long. Under the leadership of Ben Hasan, Senior Vice President and Global Chief Culture, Diversity, Equity Inclusion (CDEI), Walmart recently added a fifth objective to its CDEI strategy, which is to increase Enterprise Equity & Accessibility.

Master Barber Larry E. Roberts Jr. is a partner in that vision of equity with Walmart. Roberts celebrated the opening of his newest location, Larry’s BarberMaximus inside the Chatham Walmart Supercenter located at 8331 South Stewart Avenue on September 23, 2021. Walmart believes opening small, locally owned businesses like Larry’s Barber- Maximus in Walmart stores gives customers an opportunity to experience new services and gives the businesses and employees a vision and path to grow.

A desire to keep Larry’s own hair well-groomed at the age of 13 led to a very successful business enterprise and a commitment to helping others in the process. Roberts’ family relocated to Matteson, Illinois from Chicago when he was a teenager. Realizing there were no barbershops for Blacks in his new community, he purchased a $19 pair of clippers from Walgreens and learned to cut his own hair.

He was very good at cutting his own hair, creating drawings and styles that sparked the interest of others. Roberts found himself cutting hair in his parent’s basement for his classmates and close acquaintances in the beginning, but soon had numerous customers – some of whom were not Black. 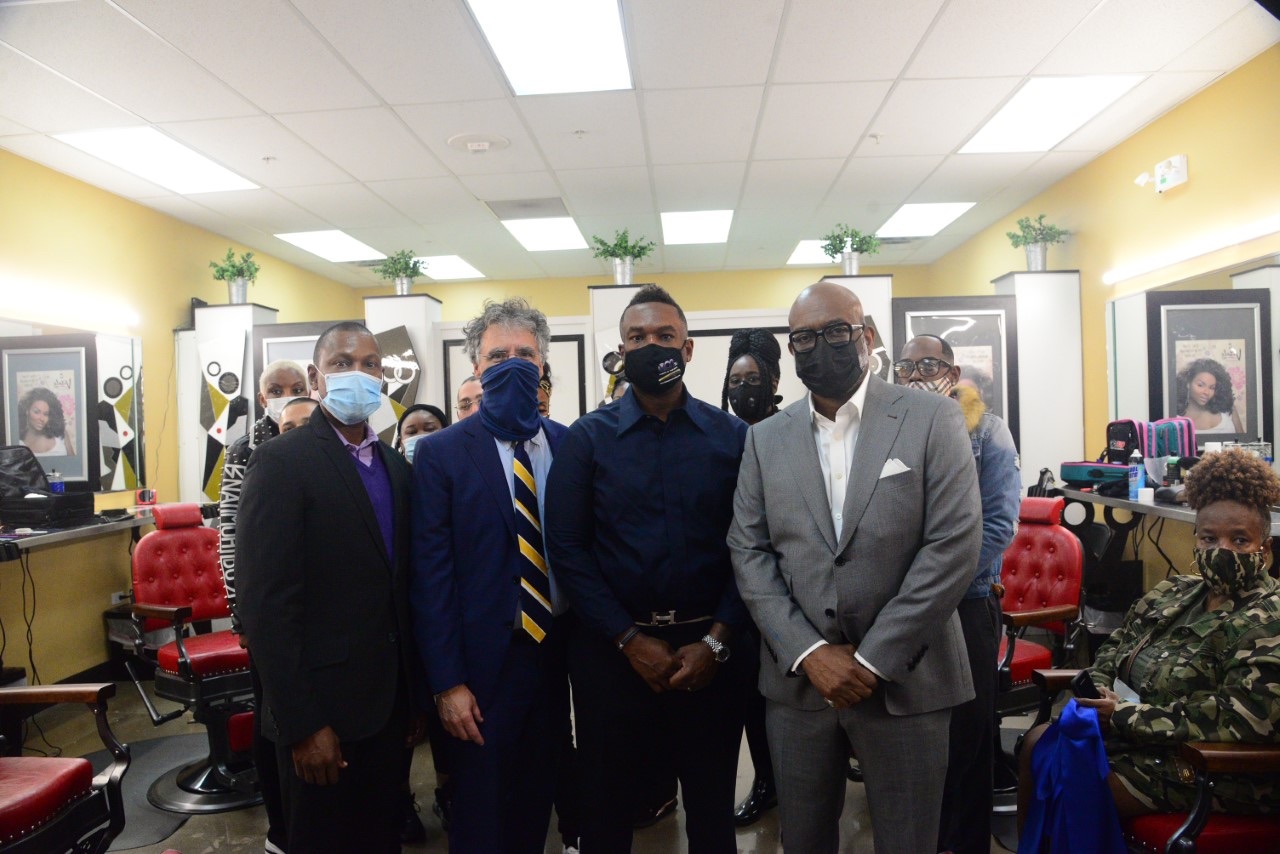 Roberts turned a necessity into an opportunity, but always with a commitment to the highest quality and the most professional atmosphere. Roberts would tell prospective customers, “I charge $3 and if I mess you up, I’ll pay you $3. But, I never had to pay anybody money because I always did really well.”

He was an entrepreneur. By his senior year in high school, the 17-year-old had a vision to pursue a career as a barber and began attending McCoy’s Barber College. It was what he enjoyed and was passionate about. At 19 years old Roberts opened his first barbershop in Matteson with the money he saved cutting hair. He says the rest is history. “I’ll be celebrating 30 years in business. To date, I actually own eight barber and cosmetology schools and I am the first person to ever put a school inside of a county jail,” said Roberts.

Roberts opened his first barber college in 2004. Today, he is recognized as having the first accredited barber program inside a state prison facility.

Roberts is also inside two Illinois Department of Juvenile Justice locations with another recently approved. He also has the backing of Illinois Governor J.B. Pritzker. Roberts supports his prison programs with a non-profit organization that he established to provide resources and finances. In his mission to create the next generation of licensed barber professionals also includes former ex-offenders – juveniles and adults in the prison system while working to reduce the rate of recidivism.

This is why Walmart was interested in Larry Roberts—his commitment to providing inmates and the formerly incarcerated with values, jobs, and support. Walmart recently launched a pilot program in the U.S. to provide employment to select individuals exiting the criminal justice system and offer support through wrap-around services. The intent is to connect citizens with jobs and support that Walmart believes will help them successfully re-enter society.

BarberMaximus employs several graduates in the barbershop from Roberts’ program.