Teachers agree to new contract that includes raises, back pay 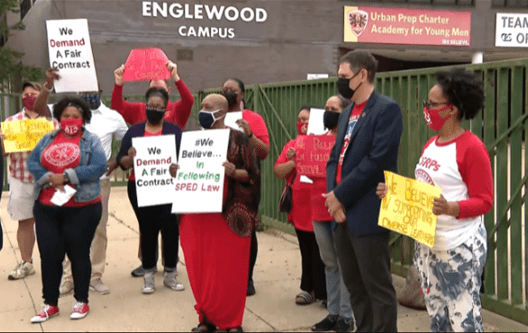 The two-day strike began Monday, June 7, when 34 teachers walked off the job at the academy’s Englewood, Bronzeville and Near West Side campuses. Teachers there had been without a contract since November 2018.

The strike did not affect classes at the schools. With several weeks left before school ends for the summer, administrators kept their doors open as negotiations continued. A total of 650 students are enrolled at all three campuses, which have a tradition of getting 100 percent of their graduates into college.

As part of the contract, teachers at all three schools will receive pay raises, and back pay for the last three years when contract negotiations were ongoing. The contract also provides commitments from administrators to follow special education requirements to support students.

“We’re not here without the voices of parents and teachers advocating for students,” CTU attorney Latoyia Kimbrough said in a statement.

According to the Chicago Teachers Union (CTU), under the tentative agreement, Urban Prep teachers for the first time will have class size limits and new improvements to teacher evaluations and provisional periods for new hires designed to retain high-quality teachers.

The CTU had sought a one-year contract, but Urban Prep administrators pushed for a three-year deal, saying it would not be in the best interests of teachers or the schools to reopen bargaining so soon.

While the tentative agreement is a two-year agreement, the union said it won the right to open the contract for renegotiation shortly after the next school year.

“Throughout bargaining, Urban Prep families, teachers and staff remained deeply committed to the company’s mission to nurture and support young Black men — and to holding management accountable in embracing and enacting its charter vision and mission,” the Union said in a statement.

Teachers there said they were at the bottom of the Chicago Public Schools pay scale, which led to high turnover within the schools.

On May 27th, 26 union workers voted unanimously to authorize a strike against Urban Prep Charter Schools.

CTU officials said for three years, management has refused to offer wages that keep pace with inflation, instead offering workers a 1 percent total raise for the last three years above the wages educators were earning in 2018. The inflation rate for 2018-20 was 5.5 percent.

According to CTU officials, Urban Prep Charter Schools receive the same per-pupil funding as every other CPS and charter school. They also say the operator has received over $3 million in PPP pandemic funds for salaries and services. CTU officials accuse the schools of years of mismanagement, with the administration twice missing payroll, even though those funds come directly from CPS.

According to CTU, Urban Prep educators are at the bottom of the pay scale among unionized Chicago schools, with starting pay more than $11,000 less than at CPS. They also say turnover is extremely high, creating dangerous instability for the schools’ overwhelmingly young Black male students.

“Urban Prep has the resources to do right by our students and the educators who serve them, and we will strike if we must move those resources into our schools,” said Chris Baehrend, chair of the CTU’s charter division.

“Urban Prep students deserve the special education services that are mandated by federal law, and our school communities deserve the resources our young people need.”

Normally, this space is reserved for my monthly column, but I couldn’t pass up the opportunity to discuss one of the events that I...