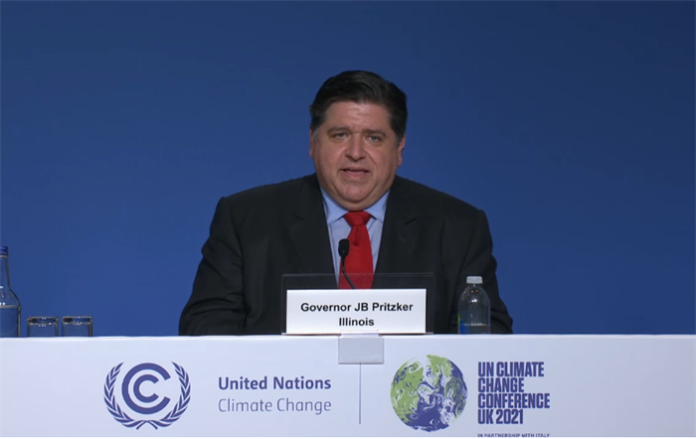 As global leaders met in Glasgow, Scotland, over the past two weeks to discuss the effects of and potential policy solutions to climate change, Gov. JB Pritzker made the case in a pair of speaking events that Illinois is doing its part to counteract troubling climate trends.

It was the governor’s first international trip, which took him first to London to talk with business leaders, then to Glasgow to attend the annual United Nations Climate Change Conference, or COP26.

“I’m here to say that in America’s heartland lies a state that’s taking strides to match the urgency of this moment,” Pritzker said, calling a recently-passed energy regulatory overhaul a “nation-leading climate plan.”

That climate bill, among several other provisions, aims to phase out carbon emissions in the state’s energy sector by 2045 by increasing investments in renewables and the state’s nuclear industry. Another goal of the climate bill and a follow-up business incentives package aims to put 1 million electric vehicles on Illinois roads by 2030.

The international visit was also an effort by Pritzker, members of his staff and Democratic leaders of the General Assembly to tout the state as a fertile ground for electric vehicle manufacturers.

The Reimagine Electric Vehicles, or REV Act, passed the General Assembly with near unanimous support in October as lawmakers and the governor’s office shared a sense of urgency in the effort to lure business development in the competitive electric vehicle industry to the state.

The incentives include credits ranging from 50 percent to 100 percent of income tax withheld for a new job created or employee retained in the industry in Illinois, depending on factors such as company location. It also provides tax credits for training costs, among other incentives.

Aside from the recently passed legislation, Illinois also has strong infrastructure, a central placement making it a distribution hub, is home to engineering schools at the University of Illinois and Northwestern University, and houses top national laboratories Argonne and Fermilab, Pritzker said.

“It all adds up to this: Illinois intends to become the best place in North America to drive and manufacture an electric vehicle,” Pritzker said, inviting business leaders to “join us in Illinois as we build the beating heart of this industry in North America. Help us reduce emissions from the transportation sector and build out the infrastructure of the future.”

The latest filings, submitted to a three-judge federal court panel Wednesday night, will be the subject of a combined hearing that is tentatively set for the week of Dec. 6, although exact dates have not yet been announced.

Along with the proposed new maps, the filings also include written testimony of expert witnesses and arguments as to why the plaintiffs believe the approved maps are unconstitutional and violate the federal Voting Rights Act of 1965.

The plaintiffs include the two top Republican leaders in the General Assembly, Sen. Dan McConchie, of Hawthorn Woods, and Rep. Jim Durkin, of Western Springs, who hope to use the case to chip away at the Democrats’ current supermajorities in both the Illinois House and Senate.

Another set of plaintiffs includes a group of Chicago-area Latino voters represented by the Mexican American Legal Defense and Educational Fund, or MALDEF.

The third set of plaintiffs includes the East St. Louis branch of the NAACP, which argues that Black areas in and around East St. Louis that could have made up a Black-majority district were deliberately broken up and spread across separate House districts in order to protect two white incumbent Democrats.

All three of the suits name House Speaker Emanuel “Chris” Welch, Senate President Don Harmon and the Illinois State Board of Elections, along with its individual members, as defendants. They seek an order to block ISBE from implementing the maps that Gov. JB Pritzker signed into law Sept. 24 and to adopt the new maps that they have submitted to the court.

All three sets of plaintiffs rely heavily on a 1986 U.S. Supreme Court precedent from North Carolina, Thornburg v. Gingles, which set out three factors needed to invalidate legislative district maps on the grounds of racial discrimination.

SUPREME COURT RAPE CASE: The rideshare company Lyft argued before the Illinois Supreme Court Wednesday that a 2014 state law protects it from being held liable for the criminal actions of one of its drivers who allegedly raped a passenger in 2017.

The case centers on the constitutionality of the state’s first law to regulate the industry, passed in 2014, and could have implications for the separation of powers between the legislative and judicial branches.

The alleged rape occurred in July 2017 in Chicago, when the plaintiff, referred to in court filings as Jane Doe, used the Lyft app on her phone to schedule a ride after a night out with friends. She was picked up by Lyft driver Angelo McCoy, and fell asleep in the back of the vehicle and was later raped, according to the court filing by her lawyer, J. Timothy Eaton, of Taft Stettinius & Hollister LLP.

The Supreme Court was not asked to consider whether Lyft could be held directly liable for negligence or fraud. Instead, the legal question is whether Lyft can be held “vicariously” liable for the acts committed by McCoy.

Key to the case is the 2014 Transportation Network Providers Act, passed on the final day of the General Assembly’s legislative session on Dec. 3 of that year.

Discussion in legal filings centered on a specific provision of the Transportation Network Providers Act that states that rideshare drivers “are not common carriers, contract carriers or motor carriers, as defined by applicable State law, nor do they provide taxicab or for-hire vehicle service.”

Lyft argues that language differentiating Lyft from other “common carriers” means it is not subject to the same liability as a taxicab company – which is a common carrier, along with other modes of transportation such as airplanes and railcars.

But Doe’s team argued that if the General Assembly wanted to grant such immunity, it should have spelled it out directly.

Doe’s court filing argued that a passenger’s safety is in the driver’s hands, whether in a cab or a Lyft, which makes that a “special” relationship which holds the driver to the “highest duty of care.”

If the court does decide that the Transportation Network Providers Act grants immunity to rideshare companies, Doe’s team argued, then it should determine that the law unconstitutionally favors a specific industry, and it should be struck down on those grounds.

But Lyft’s lawyers, along with Raoul, argued that such a reading of law would constitute an overreach by the court, because lawmakers made a reasonable judgement that the industry is different than the taxicab industry and should be regulated differently.

HEALTH CARE CONSCIENCE: A new law in Illinois will soon clear the way for employers to enforce vaccination, testing and other mitigation measures to prevent the spread of COVID-19.

The measure, Senate Bill 1169, amends the Illinois Health Care Right of Conscience Act, a 1977 law originally intended to shield doctors and pharmacists from liability for refusing to participate in abortions. Gov. JB Pritzker’s office reported that he signed it late Monday, Nov. 8, while he was at an overseas trip to Glasgow, Scotland, for the United Nations Climate Change Conference.

Illinois was one of several states to enact such a law in the wake of the 1973 U.S. Supreme Court decision in Roe v. Wade. Federal law also provides similar protections.

In recent months, though, that law has been used by individuals in Illinois to block employer mandates that certain workers receive COVID-19 vaccines, disclose their vaccination status or undergo regular COVID-19 testing as a condition of employment.

In some cases, those plaintiffs have been successful in obtaining restraining orders against such mandates, including a group of nurses in Kanakee who objected last month to a local hospital’s vaccine mandate.

The new law, which becomes effective June 1, makes an exception to the Health Care Right of Conscience Act by saying it is not a violation of the act for an employer to impose or enforce any requirements “that involve provision of services by a physician or health care personnel intended to prevent contraction or transmission of COVID-19 or any pathogens that result in COVID-19 or any of its subsequent iterations.”

The bill passed the House Oct. 27 by a vote of 64-52. It passed the Senate the following day, 31-24. Because the votes took place after May 31, and because it did not pass both chambers by at least a three-fifths majority, under the Illinois Constitution the new law cannot take effect until June 1, 2022, unless lawmakers come back and pass an identical bill during the 2022 session, which begins in January.

RENTAL FUNDING: The application period for a new round of financial assistance to renters through the Illinois Housing Development Authority will be delayed one month as the application portal undergoes additional testing, although funding remains available through other state programs.

The latest round of funding, provided by the American Rescue Plan Act signed into law by President Joe Biden earlier this year, includes more than $250 million that IHDA said it expects will help 27,000 Illinois renters. The application window, which was scheduled to open Monday, will now be open from Dec. 6 to Jan. 9.

Amy Lee, a spokesperson for IHDA, said the delay was due to the department’s efforts to switch to a new application portal for this round of funding.

The new portal was built to accommodate the rental assistance program as well as a yet-to-launch mortgage assistance program, Lee said, but testing conducted Friday night showed it would not likely be able to withstand heavy traffic.

Despite the delay, rental assistance funding is still available through other state programs run by the Illinois Department of Human Services.

Renters may still be able to access assistance through an IDHS provider agency. A list of provider agencies, as well as organizations helping with utility bills, free legal aid and additional services can be found at www.illinoisrentalassistance.org/.

The court-based program is available to Illinois residents outside of Cook County and applies to those with active eviction cases. Tenants hoping to access the funding can apply for up to 12 months of past-due rent and up to three months of future rent payments using their eviction court case number at ilrpp.ihda.org.

Lee said IHDA did not expect to begin distributing funding from the latest round of assistance until Dec. 13, and that date is unchanged with the latest delay in launching the platform.

This article originally appeared on CapitalNewsIllinois