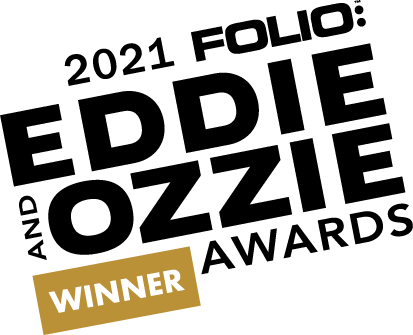 Pigment International™ recently announced that its publication, Pigment Magazine, was selected as one of the winners of the publishing industry’s prestigious 2021 Folio: Eddie and Ozzie Awards.  Pigment Magazine received the Ozzie Award for “Best Cover Design” for its Fall/Winter 2020 issue, in the category “Magazines under 250K subscribers.” Winners were announced at the Eddie/Ozzie Awards held in New York last month.

Internationally renowned artist Deborah Roberts’ mixed media piece “Fight the Power” was featured on the cover of the magazine. Much of the magazine content was derived from a survey that Pigment International undertook to ascertain how artists were weathering the pandemic and racial reckoning brought on by the killing of George Floyd. The feature piece was titled “Capturing a Moment in Time.” Further, the issue celebrated female artists across generations and featured stories on Roberts, Harmonia Rosales and Samella Sanders Lewis. Also included in the magazine were murals sparked by the Floyd killing, and an artistic tribute to Congressman John Lewis by Kevin Williams.

“We are elated to be a winner in our category,” said founder and publisher Patricia Andrews-Keenan. “Pigment Magazine was designed as an oversized, glossy publication with relevant, dynamic content but also looks beautiful on your coffee table. Further, this continues to validate our belief that there is still a place for print, especially when the focus is the amazing artwork celebrating the Black art aesthetic.”

Tanya Lyda served as creative director for the Fall/Winter issue that was underwritten by the Joyce Foundation.  Work is currently underway on the third issue of the magazine to be released by Q1 2022 through a generous grant from the Field Foundation.  Copies of both award-winning issues may be purchased on the Pigment Shop.

Launched in December 2018, Pigment Magazine has as its focus art, innovation and curation. The magazine is broken into three sections featuring stories on artists, collectors, curators, gallery owners and others who are part of the Black art ecosystem.

Pigment International™ will next exhibit at Spectrum Miami in a partnership with Golden Galleries/Art By Golden. The curated art fair presents 150+ independent career artists, studios and galleries. They will be in Booth 610 at the show held at Mana Contemporary in Miami’s Wynwood neighborhood. Additionally, Pigment International™ just completed a series of programming for last month’s Black Fine Art Month, which is now archived and available on the Pigment International YouTube Channel. The theme for this year’s recognition was “Missing History” with discussions centering on the role Black artists have in creating a more complete narrative of our country’s history. The DuSable Museum of African American History, a Smithsonian affiliate, was, for the third year, Pigment International’s partner for Black Fine Art Month.

Pigment International™ is the founder of founders of Black Fine Art Month and a multi-media arts platform that evangelizes for Black art, curation, and innovation. Based in Chicago, the organization uses arts journalism to advance the Black contemporary aesthetic in the visual arts; we honor the history and relevance of historical Black Art; and we serve as a connector for emerging creators, collectors, curators, investors, and other stakeholders. We create customized programming that sparks dialogue and inspires our constituents.