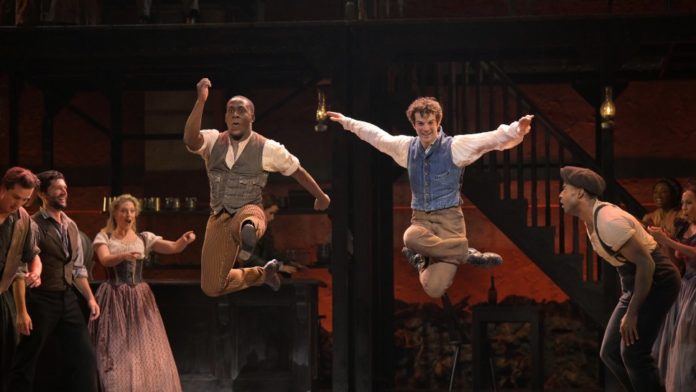 It’s 1863, Lincoln is President, and the Civil War is raging. Slavery is strong in the South, and in the North, more Blacks are being born into freedom but are still at the bottom of the ladder along with the Irish immigrants who left Ireland to escape the Great Famine. The Irish and Blacks got along and lived together in the New York community of Five Points. Naturally, some would fall in love with each other, not worried about race-mixing but sharing the love of family.

One such couple is a freeborn Black woman named Nelly Freeman O’Brien and her Irish husband Willie O’Brien. Nelly owns the saloon in Five Points called Paradise Square, a place where all can come and drink, get a little pleasure and relaxation, and dance.

Harmony only lasts so long before something or someone ignites the spark of discontent. This comes when a draft is put into place where all of the immigrant Irishmen must report being drafted into the Union Army; however, “Coloreds” are not allowed to fight even though they are more than willing to go.

The rich whites who live uptown fan this flame of discontent, and it leads to the Civil War Draft Riots of 1863 as the Irishmen take their rage out on Black residents, with as many as 1,200 dying and most of the community burned to the ground.

Sounds depressing? No, it is a look into history that isn’t too far from actions of today.

I was in the opening night audience and found that there is so much more to this production than I realized. The cast is one of the most amazing I have seen in a long while. Going to as many plays as I do, sometimes it feels as if I am just watching the action on a stage. “Paradise Square’s” energy leaves the stage and surrounds the audience in such a way that you feel part of the story and not an onlooker.

One of the reasons for that is Tony Award nominee Joaquina Kalukango. From the time she steps on the stage to the curtain call, you are in the palm of her hand. Her voice and interpretation of the songs and dialogue are the soul of the production.

The co-star of the production is the Irish Step Dancing and the African Juba (a form of dance that led to tap dancing) choreographed by renowned Bill T. Jones. If you don’t know of him, Google him. You need to know who he is.

The beauty of both forms of dance tells a story with each step and arm movement. The dance competition between the two groups have you moving in your seat and tapping your feet.

When Nelly sang “Let it Burn,” tears sprang to my eyes and chills ran through my body. The audience jumped to its feet as if pulled by an invisible force. I have never felt anything like it.

I can’t close out this review until I mention Chilina Kennedy, who plays Nelly’s sister-in-law Annie Lewis. Her spunkiness and fire are just the right touches to show the love and determination of these two women, one Black and one Irish, and both so much the same.

“Paradise Square” touched the soul of the audience. The energy and poetry of the dancing, the passion of the story, and the power of the songs and voices bought us to our feet in understanding.

The production is only at the Nederlander Theatre through December 5. It is a production you do not want to miss.