Cowardice in the line of duty 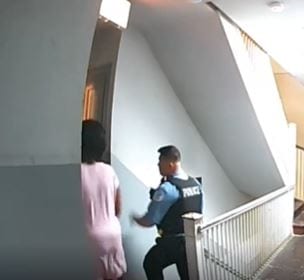 Video of a Chicago police officer abandoning a woman who was being threatened by a man with a gun in South Shore last week is raising a lot of questions.

In a video posted online and reported first by CBS2 Chicago, a Chicago police officer is seen responding to a domestic violence call at an apartment building. A woman dressed in a pink robe and slippers is talking to the officer in the 59-second video. Moments later the officer can be heard talking with an individual inside the apartment as the woman stands directly behind the officer to shield herself from the man. When the man emerges with a gun, the officer flees leaving the woman to fend for herself.

The June 21 incident happened at 6:10 a.m., according to the timestamp on the video. Chicago police dispatch records show a call in the 6900 block of South Oglesby in the South Shore community about the same time. There was also a S.W.A.T. team response to that same address in the police department’s 3rd District, in which a suspect was taken into custody after an undetermined amount of time, without incident. 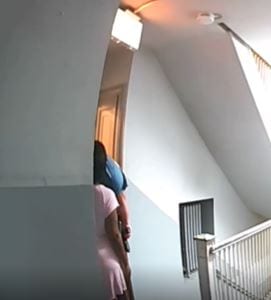 The officer is giving the man oral commands and tells him twice, “you’re not in trouble,” as they talk to each other through a partially opened door. Seconds later, the officer sees the man with a gun inside the apartment and the officer moves from in front of the door, to the top steps of a stairwell nearby. He tells the offender, “Hey, my man, my man, do not do that my man.”

As the officer goes one way behind a wall on the top of a stairwell, the woman he was shielding gets confused and goes in another direction. The offender briefly closes the apartment door but emerges seconds later with gun in hand as the officer is still on the top stair and the woman has now moved a few feet away into an open adjacent hallway. The man then walks toward the woman pointing the gun at her. Instead of engaging the suspect, the officer turns his back and runs down the stairwell leaving the woman alone with the man with the gun. 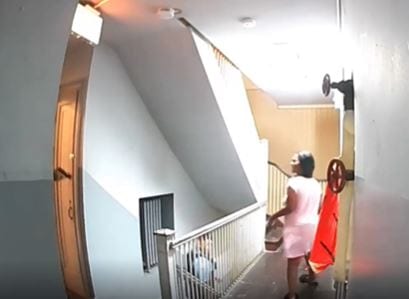 As he is pointing the gun at the woman, she can be heard on the video saying: “Christopher, you’re going to shoot me?” 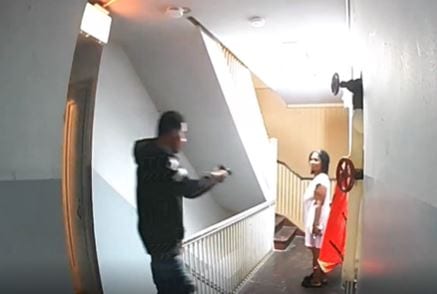 But what happened afterward to the suspect and the victim, along with the officer who ran away, is still uncertain.

What is known is that the officer’s actions were not within law enforcement guidelines, according to law enforcement expert David J. Thomas Ph.D. A retired police officer with the Gainesville, Florida, department, Thomas now serves as a Professor in the Department of Professional Studies at Florida Gulf Coast University, where he teaches in the Justice Studies Program. He holds a Ph.D. in Forensic Psychology and a master’s degree in Education. His research interests include: police, police/forensic psychology, serial homicide, victimology, violence, and terrorism.

“My initial reaction when I saw this was ‘what the ….?,” Thomas said.

“I don’t know if he saw the gun in the guy’s hand or what. But you have a victim that is literally afraid. And there is no doubt that she is afraid because she is literally cowering behind the officer. Then he (the officer) has an obligation to take care of her and make sure she is safe and secure.”

Thomas went on to say that most law enforcement agencies have a policy on cowardice in the line of duty, which could result in disciplinary action. In 2006, then-Chicago Police Superintendent Phil Cline fired two officers and suspended another after they abandoned a fellow officer who was being attacked by a 400-pound suspect with a gun at a South Side Dominick’s store. The officer who was abandoned eventually fired his weapon to stop the attack and the offender died. Video reviewed by Cline of the incident led to his decision to discipline the officers.

“Yes, this is a fireable offense,” said Thomas of the June 21 incident. “There is a duty to protect and intervene. You have sworn and taken an oath of office, so you are required to do this.”

Thomas said the officer should have confronted the suspect as soon as he saw the weapon in the suspect’s hand. He said there were two people whose lives were at immediate risk and by not reacting to the threat, both were lucky to escape unharmed.

“That challenge should have occurred right there at the door when the offender came out that apartment with the gun in his hand,” Thomas said. “I have never had a problem in my 20 years on the force—when I thought there was a threat pointing a gun at somebody—to get people to understand how serious I was that if they failed to comply with me that I would have to use deadly force. That’s the problem I’m having with this particular situation. Not only was the victim in danger. But as far as an officer safety issue, he turns his back and goes down the stairs, and I’m sure at some point he is aware there is a firearm there.”

Thomas said he has been on similar domestic violence calls while recognizing that all calls are not the same. He said in his career, on a number of occasions he removed a woman or child from the situation before engaging with the suspect because that was the right thing to do at the time. He said an officer’s duty is to protect the innocent and if he could do that by negotiating the release of the victims first, that’s what he would do. But if he left the scene, the victims were coming with him as he was leaving nobody behind.

“I just don’t know how you leave the lady there,” he said. “I would have had her go down the stairs, and then I would have backed down the stairs at gunpoint. We can negotiate later, but my obligation at that time on that scene is that victim. If that means I have to put myself between him and her to get her out of there, then that’s what I do. He just opted not to do that, and I don’t understand why, unless there is something very unique that Chicago police does that nobody else does in the rest of the country.”

The “why” question is something CPD is looking into, according to a spokesperson. They are investigating the video itself but would not acknowledge that the event even took place.