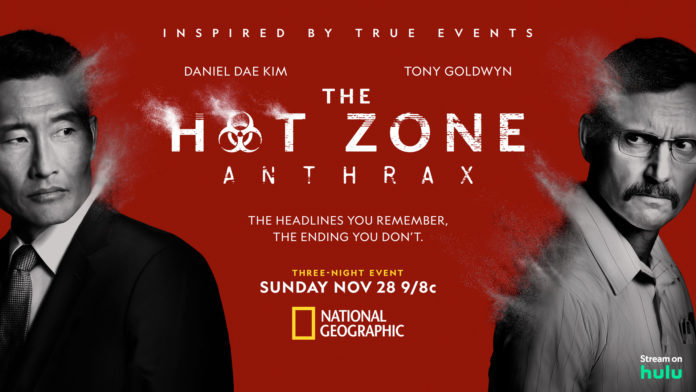 With the world still reeling after the attacks of 9/11, America faces a second wave of attacks – the anthrax letters. Targeting journalists and politicians, mail with anthrax powder kills five people, sickens nearly two dozen more and causes panic across the United States.

National Geographic’s six-part limited series, “The Hot Zone: Anthrax” follows an FBI Special Agent as he tracks down the killer, finding himself ensnared in an unstable web of psychological warfare. Inspired by true events, the six-episode limited series focuses on the anthrax attacks of 2001 and will premiere during a three-night event, beginning on Sunday, November 28, at 9/8c on NationalGeographic and will also stream on Hulu.

Just weeks after 9/11, when the United States was rocked by another deadly act of terrorism, letters containing anthrax were sent to unsuspecting victims in Florida, Washington, D.C., and New York. Despite many false leads, a team of FBI agents and scientists slowly closed in on a shocking prime suspect.

While many of us can remember the breaking news headlines and widespread fear that arose during the anthrax attacks, there are many layers to this chilling and unbelievable crime story that have not yet been told.

National Geographic’s limited series “The Hot Zone: Anthrax,” inspired by true events, follows parallel stories of Matthew Ryker (Daniel Dae Kim) and Dr. Bruce Ivins (Tony Goldwyn). Ryker, an FBI agent with a specialty in microbiology, risks his career to convince his superiors of the unthinkable: The United States is under attack again.

Ivins – a brilliant microbiologist who becomes embroiled in the hunt to find the 2001 anthrax killer – works closely with the FBI to uncover who is behind the deadly anthrax letters, while his growing instability and paranoia give way to even deeper and unnerving discoveries.

I was able to screen this series, and I had forgotten that this threat to America came shortly after the September 11 tragedy. The threat of anthrax in the air and in this series starts in a lab overseas in April 1979 in Sverdlovsk, USSR, which is in Russia. A mistake allows some anthrax spores to be emitted into the air. Next up, 22 years later, news agencies throughout the United States are targeted, with the first occurrence in the death of Robert Stevens, a resident of Boca Raton, Florida, who was a British-born journalist working for the “Sun” newspaper.

An online search described anthrax as being caused by inhaling, ingesting or by having any contact with the spores of Bacillus anthracis bacteria. Symptoms vary depending on the route of entry and ranges from skin ulcer to diarrhea and difficulty in breathing. The standard treatment for anthrax is a course of an antibiotic. But treatment and prognosis also depends on your age and severity of symptoms.

The series shows the dogged work of authorities in tracing down anthrax, in hurried succession in different towns to take samples of office buildings and homes that are suspected of possibly having been in contact with anthrax or folks who may have unknowingly been in close proximity.

The cast also includes FBI Agent Dani Toretti (Dawn Olivieri) who is tough enough to maneuver the Boys Club in the bureau and is among the first agents on the ground at the 2001 Capitol Hill anthrax attack; bureau newbie FBI agent Chris Moore (Ian Colletti), a graduate of Quantico and eager to learn under a seasoned agent; high-ranking FBI lifer Ed Copak (Dylan Baker), who feels the weight of responsibility to get justice for a wounded nation after the recent events of 9/11.

The series also stars FBI Agent Eric Sykes (Morgan Kelly), a cocky FBI agent who delights in mocking Ryker for his hunt for “elusive bio-weapons;” Sheila Willis (Denyce Lawton), a pharmaceutical lobbyist dating Ryker but rethinking her priorities after 9/11; Dr. Simon Kurz (Carlos Gonzalez-Vio), a USAMRIID colleague of Ivins who finds himself out of his depth when suspicion among scientists starts to bubble up in the tight quarters of the biosafety level 4 labs.

Jody Hall (Vanessa Matsui) is a diligent USAMRIID scientist seen as a confidante by many with a wary eye on the political and personal agendas of those around her; Mayor Rudy Giuliani (Enrico Colantoni) who emerges as a bold advocate for the citizens of New York City after the 9/11 terrorist attacks; and respected journalist and NBC news anchor Tom Brokaw (Harry Hamlin), the steady and trusted voice of reason for a post 9/11 nation.

I perked up while watching this series when I saw Brokaw and other journalists, who during previous decades brought Americans the news in an objective, respectful manner. This entire series was great in laying out just how America responded to yet another dreadful, anxious time in our recent history. It will keep viewers on the edge of their seats, as they anticipate one discovery and clue after another.