‘The Wire’ actor Michael Kenneth Williams dead at 54, was bigger than an actor

I wasn’t going to write this column about a talent gone too soon, simply because I am still stunned by the news. But I would feel unworthy as an entertainment writer if I didn’t pull myself together and didn’t address the death on September 6 of actor Michael Kenneth Williams. Many will say that Williams’ role as Omar Little in HBO’s “The Wire,” a series that chronicled the life of murders, drug dealing and crime in an inner-city area of Baltimore, set off his stellar career. However, he later had such range in his artistic reach that allowed him to play a litany of roles. As Omar, he was the menacing, fearful, whistle-happy, profanity-averse, dealer-robbing stickup man—a role that earned him high praise and made Omar one of television’s most memorable characters.

One of his co-stars, Wendell Pierce, tweeted, “The depth of my love for this brother can only be matched by the depth of my pain learning of his loss. An immensely talented man with the ability to give voice to the human condition portraying the lives of those whose humanity is seldom elevated until he sings their truth.”

Ayuko Babu, co-founder and executive director of the Pan African Film Festival (PAFF), released the following statement about Williams’ death. “Brother Michael was an incredible actor. He captured a depth of humanity to his characters that reflected his own. We will miss him. Our condolences to his family and loved ones. We all share in his loss.”

Freelance writer and author of “Unflappable” and “The Panthers Club” Lisa D. DeNeal shared a great story with the Crusader of meeting the actor in Gary, Indiana. “I was stunned when I heard the news of Williams’ death. His portrayal of Omar on ‘The Wire’ catapulted him to fame. When in the fall of 2008, Curtis Whittaker, Sr., who is now a Pastor at Progressive Community Church in Gary and his wife, Dr. LaShawn Whittaker, told me Williams was in town, I jumped at the opportunity to meet him.

“Williams was campaigning for Barack Obama’s historic presidential run and encouraging citizens to register to vote. I caught up with him at a local restaurant to interview him, and he was gracious the entire time. Williams also witnessed a group of young dance students perform— Williams was a professional dancer prior to his acting career—and he loved their performance. Every person he met that day called him Omar, and he did not mind one bit. The entertainment world lost a gem today.”

Journalist Derrel Jazz Johnson from Harlem, New York, told this reporter: “I had the pleasure of meeting him before I was aware of his acting talents. His ‘Omar’ character is one of the most iconic. In New York City, he was just starting to do a lot of community service work, too. May he rest in peace.”

Television writer David Simon, who created “The Wire,” which ran from 2002-2008, and the police series “Homicide: Life on the Street” (1993-1999), tweeted, “Too gutted right now to say all that ought to be said. Michael was a fine man and a rare talent and, on our journey together, he always deserved the best words. And today those words won’t come.”

In addition to the above-mentioned series, among others, Williams was also a regular on “The Night Of,” where he played a Rikers Island inmate. He also played Leonard on the SundanceTV crime series “Hap and Leonard.” On HBO’s “Boardwalk Empire,” Williams played the dapper-dressing Prohibition gangster Albert “Chalky” White. In a role that brought to light the injustices lobbed against the Exonerated Five (the Central Park Five), Williams played Bobby McCray, the father of Antron McCray, in Ava DuVernay’s Netflix series “When They See Us” in 2019.

Williams, who had a distinctive facial scar due to a bar fight when he was 25, performed with the National Black Theatre Company and starred in “I Think I Love My Wife,” “12 Years a Slave,” “Motherless Brooklyn,” “Critical Thinking” and the 2018 “Superfly,” among other films.

Of late, he had been nominated for an Emmy for the best supporting actor in a drama series Primetime Emmy for his performance as Montrose Freeman on HBO’s “Lovecraft Country”—and is widely expected to win in a celebration that is due to be announced on September 19.

According to Variety magazine, Williams’ Vice TV series “Black Market” had completed much of Season 2. The series investigates situations that drive people into underground economies and illegal trade networks. In Season 1, Williams had uncovered black market conditions and the cultural reasons why they existed from carjacking in Newark, New Jersey, to the poaching of abalone off the coast of South Africa.

Compton (Los Angeles) Council member Michelle Chambers and sister of actor Michael K. Williams released the fol- lowing statement on the death of her brother: “Our family has been shaken to the core of the loss of our Mike. Thank you to everyone who contacted us, flooded us with love, and more importantly, prayers. I will miss my brother, my best friend and birthday partner in this realm, but I know he will continue to watch over me and our family in Heaven as he did on earth.”

When speaking about his own acting ability in 2015, Williams told The Guardian, “I use my job to engage empathy and compassion for people society might stereotype or ostracize. No one wakes up and says, ‘I’m going to become a drug dealer’ or ‘I’m going to become a stick-up kid.’ No, there is a series of events that makes them feel this is the only way out. As a Black man growing up in the ‘hood, I bear witness to some of those events.” He told The New York Times in 2017: “Omar is this dark- skinned, outspoken man in the ‘hood who didn’t care what anyone thought of him. He is everything I wished I could be.”

Williams had also discussed his issues with low self-esteem and his battle with drug addiction in previous interviews and the help he received from a New Jersey church. “I’ve struggled with addiction issues. No one’s life, least of all mines, would have been safer, better or more productive if I had been jailed for my addiction issues,” he told CNN in 2016, in his role as the American Civil Liberties Union’s ambassador for ending mass incarceration. 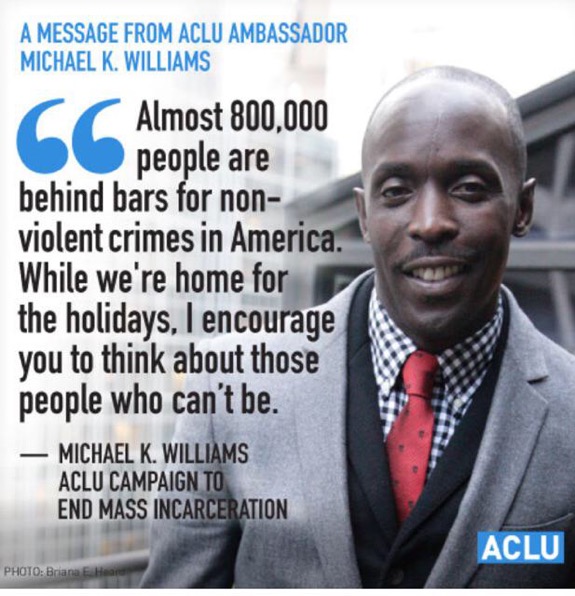 And as Jazz Johnson mentioned Williams’ community work above, Williams worked on political campaigns and, according to Williams’ website, he established Making Kids Win, a charitable organization whose primary objective is to build community centers in urban neighborhoods that are in need of safe spaces for children to learn and play.

Williams died on September 6, was 54, and he is survived by his mother, Paula Williams; his brother, Paul Carey; his sister Michelle Chambers and his nephew, Dominic Dupont. Many news media outlets are reporting that drug paraphernalia were found in his penthouse apartment in Brooklyn, New York, the borough where he was born, and his death is being investigated as a suspected fatal overdose.

Share
Facebook
Twitter
Pinterest
Linkedin
Previous articleCommunity Healthcare system is recognized among 2021 CIO 100 award winners for IT innovation
Next articleTwenty years after the September 11 attacks, the faces and stories of hundreds of Black victims are rarely seen and told

Illinois Lottery teams up with the Boys & Girls Clubs

Riddle me this. Kinfolk be wondering how many times a fool gots to bump his head. Cook County remains a super-N word Democratic voting...

Illinois Lottery teams up with the Boys & Girls Clubs