A TALE OF TWO DIASPORAS 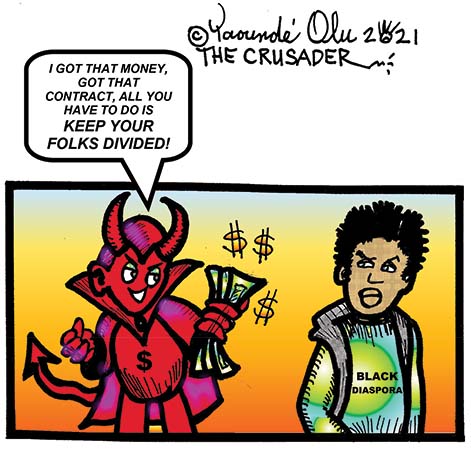 According to Wikipedia, a diaspora “is a scattered population whose origin lies in a separate geographic locale. Historically the word diaspora was used to refer to the mass dispersion of a population from its indigenous territories, specifically the dispersion of Jews.”

In recent times, the word has been used by Black people to describe their dispersion from Africa to locations across the globe.

There are great similarities between Blacks and Jews. Both groups have been unjustly persecuted by whatever countries in which they have resided. Both have experienced “holocausts,” the Jews in Hitler’s Germany during World War II, and Black people during the Middle Passage and western slavery. However, while Black people have been relegated to the “bottom caste” in most places around the world, Jews have ended up as disproportionate achievers everywhere they have landed. At the same time, they have been discriminated against.

Blacks and Jews have been sojourners on a similar social justice train, and both groups have worked together to fight oppression. It is no secret that Jewish people played prominent roles in the Civil Rights Movement; they have been long time allies in the struggle. Of course, there are people who disagree with this notion citing the fact that Jews are considered as “white.” The truth is that both groups have endured seemingly undeserved hatred from people around the globe.

During the latter part of the 20th Century, things began to change regarding the perception of Jews, which is partially connected with the institution of the state of Israel in 1948 and the seeming persecution of the Palestinians. In this regard, the oppressed are said to be acting as oppressors, which once again gives people of the world a reason to love to hate them. This is where the Black/Jewish train ceases to meet.

Black people, who have experienced continual oppression everywhere around the globe, including on the African continent, have witnessed the birth of the Black Lives Matters movement in America. This has also generated somewhat of a backlash among people who have irrationally taken umbrage with the idea of the movement, retorting with “All Lives Matter.”

Basically, when observing the foregoing, these two diasporas have experienced oppression, but they have responded differently.

The Jewish community, through a type of cultural unity, has ended up on top of society; they wield global power that is disproportionate to their numbers. On the other hand, Black people, in spite of the fact that they have excelled in every endeavor they have engaged in, remain the bottom caste socially and economically just about everywhere.

There are reasons for this, and a close examination of the causes boils down to several important factors, which can be loosely categorized as a collective lack of self-esteem among Black people. As Blacks, we feast on a consistent diet of self-hatred as demonstrated by the negative music we promote and distribute, by the self-hatred that it conveys; and by the Black-on-Black crime that we deny is a real thing.

So basically, we have two significant diasporic experiences with widely disparate outcomes: one is in control of their society and is arguably one of the most successful groups on the world’s stage, while the other is at the bottom everywhere.

One group was able to acquire a whole country; the other makes continual excuses as to why they dislike the African continent.

This may be connected with the fact that one group, based on their religion, literally considers themselves a “chosen people” and benefits from the esteem enhancement that accompanies that notion.

The other group sees themselves as b!tches, hoes, ni**as, dogs, and continually advocates for killing each other.

In other words, one group demonstrates high self-esteem, and the other group remains hopelessly self-flagellating.

The Black community is less than globally successful due to a penchant for internal division. Black people just don’t seem to love and value each other. Of course, this is not to say that ALL Black people are like that, but there are enough to keep widespread success from happening.

Things are changing, and the truth is that Black people will remain struggling against oppressors as long as internal divisions remain. Nothing can be achieved without cultural unity! A Luta Continua.