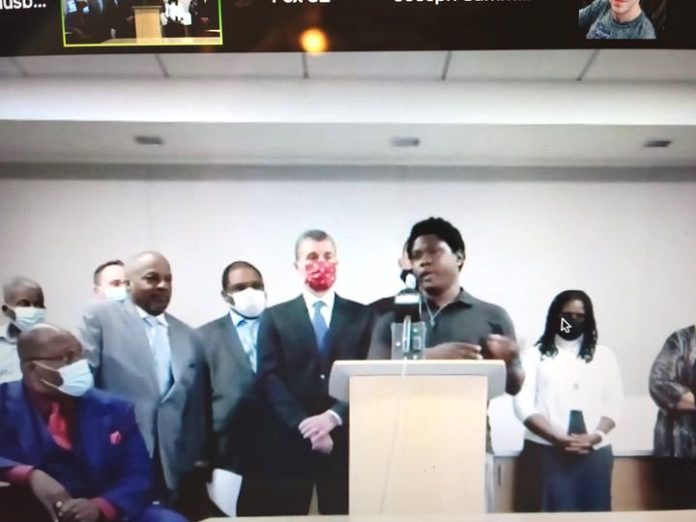 A federal court ruled that the Chicago Police Department unconstitutionally conducted a “stop and frisk” policy that affected more than two million mostly Black and Hispanic men and that the scope of this practice “is staggering,” Attorney Antonio Romanucci said late Tuesday night.

During a press conference at the law office of Romanucci & Blandin, Romanucci said it has been six-and-a half years since civil rights lawyers stood on the steps of Reverend Paul Jakes’ church where they announced the filing of a lawsuit against the City of Chicago and its police department for the unlawful and unconstitutional practice of stopping and frisking millions, mostly Black and Hispanic residents.

Romanucci was flanked by a number of ministers including Reverend Marvin Hunter, the great uncle of Laquan McDonald, Reverend Paul Jakes, pastor of New Tabernacle of Faith Baptist Church, Reverend Daniel Turner, Reverend Phalese Binion, president/CEO of the Westside Ministers Coalition, other ministers and Rashawn Lindsey. Lindsey was described by Attorney Steven Hart of the law firm Hart McLaughlin & Eldridge, as “the face of stop and risk” because he was stopped by police when he was a student at the Whitney Young High School.

Jakes credited the Rainbow PUSH Coalition and Reverend Jesse Jackson for also fighting against the stop and frisk policies. Jakes is praying for a change in Chicago.

Lindsey, one of the class representatives in this case, said he was stopped and frisked by police while walking down the street with headphones in his ears. They asked him to put his hands up and officers began going through his pockets and asked him if he had weed on his person. He didn’t have ID. “I hadn’t done anything.”

“I now have a very big mistrust of police,” he said, calling stop and frisk “ridiculous.”

The more than two million police stop and frisk stops “were performed without a reasonable, articulable suspicion that a crime had been committed” or one that was likely being committed, said Romanucci.

He said the two million stops represented nearly 2,000 a day, 1.3, every minute, without cause, 24-hours a day, seven days a week.

Romanucci said those stops resulted in no arrests, no illegal guns and no contraband. “That is why this is so staggering,” he said.

Romanucci said these stop and frisks conducted against students make young Black men “more likely to struggle in school and young men are more likely to experience symptoms of anxiety and depression.” While the stops last a few minutes, he said the symptoms are long lasting and result in distrust or lack of confidence in the police.

The stop and frisk program, Romanucci said, did not stop crime and said the crimes against children who are shot and killed are resulting in “taking away innocence at its peak.”

“This long standing policy of stopping and frisking people without cause in Chicago has damaged our communities, not made them better. They tendered our ability to fight crime….”

At the podium with ministers and Rashawn Lindsey, Romanucci said those stops were “either random, pretexual and disparate.”

On August 31, 2021, Romanucci announced that Judge Andrea R. Wood from the Northern District of Illinois Eastern Division concluded in a 46 page memorandum and opinion that “the allegations of the complaint that we filed had been proven and millions of members of our community are now a part of a certified class….”

The federal Court certified their class action lawsuit against the Chicago Police Department for its “Stop and Frisk” policies that disproportionately affected Black and Hispanic residents, Romanucci and Hart announced at the press conference.

The Court ruled that a street stop can only be performed when there exists “reasonable articulable suspicion” that a crime has been committed or is about to occur.

Romanucci alleged that plaintiffs complained that the CPD had a “longstanding dragnet practice of stopping and frisking young and middle-aged minorities” most of whom were Black and Hispanic men in mostly south and west side neighborhoods.

Plaintiffs said that these stop and frisk practices were brought to Chicago during the Mayor Rahm Emanuel administration. The strategy, Romanucci said, was taken from a page of a similar program in New York and New Jersey which was determined to be unconstitutional. Plaintiffs’ landmark case is the first one to confront stop and frisk in Chicago, Romanucci stated.

The class action lawsuit alleged that the CPD officers were directed to saturate mostly Black and brown communities and stop “the right people” and “put your hands on them” without regard to whether there was a lawful basis to stop them in the first place.

Romanucci said this stop and frisk practice violates the Fourth Amendment and the guarantee to all citizens to be free from unlawful searches and seizures.

According to the lawsuit, in just a four-month period in 2014, CPD made more than 250,000 stops of mostly Black and brown residents and visitors and that these stops did not lead to arrests.

Chicagoans, Romanucci explained, were stopped at a substantially higher rate than New Yorkers in 2011 which he said was at the peak of New York City’s stop and frisk program. In 2015, he said the percentage of stops by race and per population showed a stark disparity between whites and Blacks.

In the August 31, 2021 ruling, Romanucci said the Court agreed that the City of Chicago’s stop and frisk program caused widespread unconstitutional stops of Chicago residents. The Court concluded that Latinos had been stopped by CPD on the street about twice as much as whites and Blacks were stopped about seven or eight times more often than white people.

And, the proof, Romannuci said, is in the CPD’s own contact cards.

In her ruling the judge ruled those stops represented a pattern that was unconstitutional, a violation of their Court Amendment right and represented “insufficient justifications for investigatory stops.”

The stops, the Court ruled showed a “continuing (and worsening) pattern of unconstitutional stops under the ISR system” and that the supervisors had a pattern of covering up the police officers’ “false information” to give those stops “the appearance of constitutionality.”

Romanucci said the police department failed to train the police and covered up their misconduct all the way up a “hierarchical chain of command structure extending to the CPD’s highest level.”

In addition to seeking financial compensation for the named plaintiffs, this case includes the demand of injunctive relief and the implementation of new policies and procedures to change CPD’s current practices.

The Court’s ruling, Romanucci explained, would bring about a court-ordered police reform of the CPD policies and practices. He said there would not be any damages or financial award for the two million affected by CPD’s stop and frisk practices.

“This is a landmark ruling in the City of Chicago,” Romanucci said.

“When you see the disparate nature of the stops that overwhelmingly targeted Black and Hispanic men and you add up the sheer number of stops over the years, well above two million, it is clear to see how the community trust in police has eroded to where it is today.

“With a systemic cultural cancer of this magnitude in CPD, properly identifying the problem is the first critical step in healing it,” Romanucci told reporters. “This practice has to stop and elevating this issue to a class action provides a way to make significant change and make our community better.”

Attorney Hart said this class action “has the possibility of being the catalyst to improve some deep-seated discriminatory issues in Chicago and to impact the city’s Black and Hispanic communities in a meaningful way.”

Romanucci said though there were promises from the previous mayoral administration of reforming changes, “we sat and watched during the same month this lawsuit was filed the Laquan McDonald settlement was approved within days. None of us knew about that lawsuit, but the mayor certainly did.

“The cover-up of the video, the release of the video and the fallout that happened of McDonald’s killing” resulted in the firing of the superintendent, the resignation of the corporation counsel, “but now we see the reward of the (Japanese) ambassadorship is out for the mayor (Rahm Emanuel) whose policies, stop and frisks were completed and followed in the years of our class case.”

Attorney Hart said it was difficult to fight City Hall. “You can’t take a dragnet through the neighborhoods largely of color and say it’s OK if innocent people get caught up as long as we take a few bad apples off the street. This is not how this country was born or how it works.

“The Fourth Amendment of the Constitution says you should not be subject to unreasonable search and seizure…,” Hart said. He said some people were handcuffed, thrown to the ground but did not commit any crime other than perhaps living in a poor neighborhood….

“This is not right. This city is better. These communities deserve better behavior from their public officials and its Chicago Police Department.”