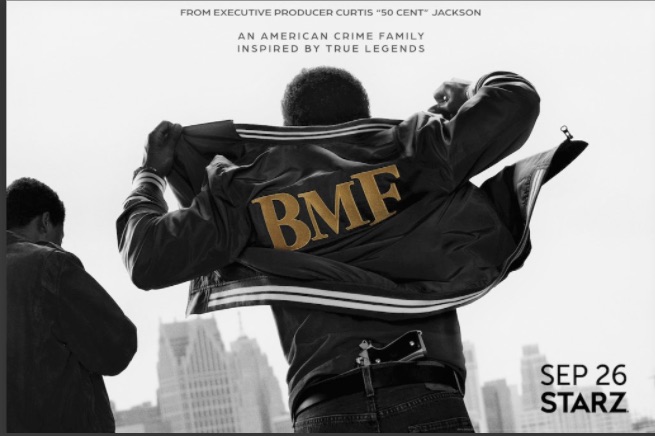 “BMF,” or “Black Mafia Family,” is inspired by the true story of two brothers who rose from the decaying streets of southwest Detroit in the late 1980s and gave birth to one of the most influential crime families in this country. Demetrius “Big Meech” Flenory’s charismatic leadership, Terry “Southwest T” Flenory’s business acumen, and their vision beyond the drug trade and into the world of hip-hop would cast the brothers in a global light. Their unwavering belief in family loyalty would be the cornerstone of their partnership and the crux of their eventual estrangement.

This is a story about love, kinship and capitalism in the pursuit of the American dream. “BMF” is executive produced by Curtis “50 Cent” Jackson, alongside showrunner, executive producer, writer and Detroit native Randy Huggins. Tasha Smith is set to direct multiple episodes and executive produce.

Demetrius “Lil Meech” Flenory, Jr., the real-life son of the notorious cocaine kingpin and southwest Detroit legend, stars as his father. Da’Vinchi stars as Terry “Southwest T,” while Wood Harris is in a recurring role as Pat. Russell Hornsby plays Charles Flenory, the principled patriarch of the Flenory family. Steve Harris plays Detective Bryant, a 20-year veteran of the Detroit Police Department, among other actors.

I was able to screen a few episodes beforehand. First off, I love that the Harris brothers, who grew up on the West Side of Chicago, are featured in this series. I also enjoy the fact that Tasha Smith is doing her thing on “BMF.” And the icing on the cake is the stern parenting from Hornsby. Both sons still have kitchen duty, and the family is struggling, but Charles is hell-bent on providing for his family without the benefit of his son’s outside enterprise.

NABJ) Virtual Convention a few weeks ago. Huggins talked about the Flenorys: “It was a Christian household. So, there was a lot of spirituality. They were raised in the church. So, I think being able to bring a spirituality aspect to this was something that really interested me,” he said.

Demetrius Jr. talked about the joy he found in playing his father. “Just getting to talk to him and hear all his childhood stories and actually live in his shoes and actually get to do some of the stuff he did, it just feels amazing.”

The panel was asked about the negative influences that the series may impart to its audience. Huggins said: “I think our show at its core is a series about family. It’s a series about love. Love for one another, love for the community, and it’s about these guys that didn’t really have an opportunity because of the situation that was facing them within the city of Detroit in the 80s. So, they made decisions. I’m not judging those decisions, but they made decisions that they thought were the best for them at that time.”

And as a loose tie-in into the theme of “BMF,” in a recent episode of the Tammi Mac Late Show on FOX- Soul, comedian Ron Taylor, while discussing the death of Michael K. Williams, posited that if cocaine were regulated and decriminalized, there would be fewer drug overdoses. “BMF” is a dramatization of a real-life drug slinging family, but I don’t want it to go unsaid—considering that I wrote about Williams’ death at length—and ironically, reportedly he and executive producer Tasha Smith once dated—that he battled substance abuse for many years.

Williams was unable to conquer his demons, but there is help for those who may be struggling through the federal government’s Substance Abuse and Mental Health Services Administration. Call 1-800-662-4357 for more information.

The eight-episode “BMF” series premieres on September 26 on STARZ.