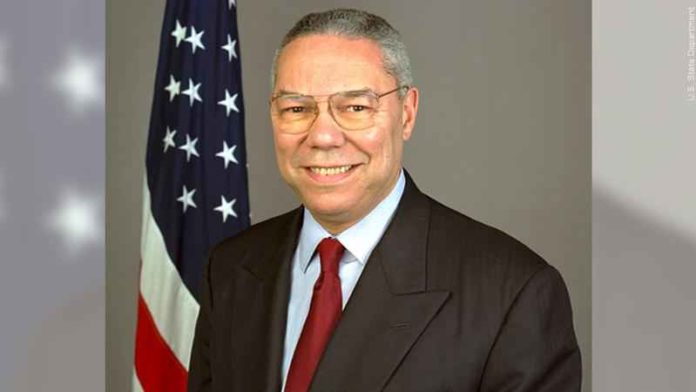 Gen. Colin Powell, the first Black U.S. secretary of state and a trailblazing figure in Washington, died of complications from COVID-19 on Monday, according to his family. He was 84.

According to a statement from his family posted to Facebook, Powell had been fully vaccinated and was being treated at Walter Reed National Military Medical Center.

Per CNN, Powell had multiple myeloma, a blood cancer that suppresses immunity.

“We want to thank the medical staff at Walter Reed National Medical Center for their caring treatment,” the statement read. “We have lost a remarkable and loving husband, father, grandfather and a great American.”

“I think it shows to the world what is possible in this country,” Powell said of his Senate confirmation hearing for secretary of state in 2001. “It shows to the world that: Follow our model, and over a period of time from our beginning, if you believe in the values that espouse, you can see things as miraculous as me sitting before you.”

Despite serving under three Republican presidents, Powell became disillusioned with the direction of the GOP later in his life.

In 2008, he broke with the Republican Party and endorsed Democrat Barack Obama, who would become the nation’s first Black president.

Powell also endorsed Hillary Clinton and Joe Biden over Donald Trump, whom he called a “national disgrace and an international pariah.”

Following the deadly Jan. 6 Capitol insurrection that was incited by Trump, Powell told CNN that he didn’t consider himself a Republican.

“I can no longer call myself a fellow Republican,” he said. “I’m not a fellow of anything right now.”

Powell will forever be associated with his role in pushing faulty intelligence under President George W. Bush to justify the U.S.-led invasion of Iraq in 2003. Powell later admitted that it represented “a blot” that will always be a part of his record.

“My instincts failed me,” Powell wrote in his 2012 memoir. “It was by no means my first, but it was one of my most momentous failures, the one with the widest-ranging impact.

“The event will earn a prominent paragraph in my obituary,” he added.

Powell is survived by his wife, Alma, whom he married in 1962, and three children.

In a statement, George W. Bush said he was “deeply saddened” by news of Powell’s death.

“He was a great public servant, starting with his time as a soldier during Vietnam,” Bush said in a statement. “Many presidents relied on General Powell’s counsel and experience. He was National Security Adviser under President Reagan, Chairman of the Joint Chiefs of Staff under my father and President Clinton, and Secretary of State during my Administration.

“He was such a favorite of presidents that he earned the Presidential Medal of Freedom — twice,” Bush continued. “He was highly respected at home and abroad. And most important, Colin was a family man and a friend. Laura and I send Alma and their children our sincere condolences as they remember the life of a great man.”

Sen. Mitt Romney, R-Utah, the former Republican presidential nominee who lost to Obama in 2008, said, “The nation lost a man of undaunted courage and a champion of character.”

“Though we disagreed on many issues, I always respected him and was proud of his achievements,” tweeted the Rev. Al Sharpton. “When he and I ran into each other and conversed, I always left feeling he was a sincere and committed man to what he believed in.”

“He always made time for me, and I could always go to him for tough issues,” Austin added. “I feel as if I have a hole in my heart.”