“Love, Charlie: The Rise And Fall Of Chef Charlie Trotter,” directed by Rebecca Halpern and screening at the 57th Chicago International Film Festival on October 18 and again in theater on October 22 and virtually through October 24, shows the strengths and perceived weaknesses of Trotter, who was raised in Wilmette, Illinois.

In the 2000s, chef Charlie Trotter was the toast of Chicago, his eponymous restaurant one of the world’s top fine-dining destinations. A gastronomic revolutionary and a culinary bad-boy, Trotter paved the way for the likes of Anthony Bourdain and Gordon Ramsay, yet his tempestuous, competitive nature alienated many. With never-before-seen archival material and new interviews with those who loved and loathed Trotter—who died from a stroke in 2013 at age 54—this absorbing, unvarnished profile chronicles the passions of a master chef and the consequences of pursuing perfection at all costs.

Trotter was a great, innovative chef who seems to have wanted much more perfection as he opened doors for other chefs, while introducing Chicagoans to an adventure in fine dining in his Lincoln Park namesake restaurant called Charlie Trotter’s. He was always known as Chuck, but when opening his restaurant, Charlie was more professional than calling his place Chuck Trotter’s.

The documentary shows Trotter’s love of food, while he travelled over the world, his early life with his parents and sister, his first love and wife, and his second wife, Rochelle Smith, whom he left to mourn his death in 2013 from a stroke after attending a culinary conference. In 2010, his restaurant was one of three in Chicago to be awarded two stars by the Michelin Guide. 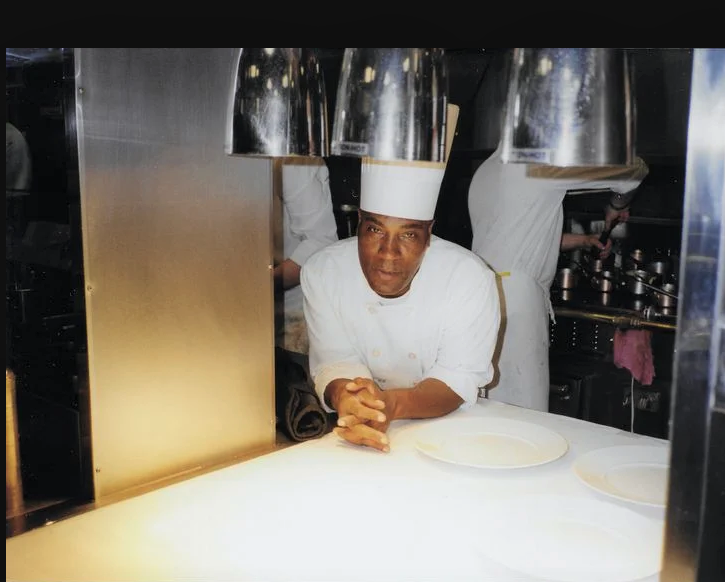 CHEF REGINALD WATKINS worked as the primary sous chef at Charlie Trotter’s restaurant in Lincoln Park for 24 years, starting from its opening. (Photo courtesy of Dylan Trotter)Trotter had worked so hard, and even getting only two stars in this prestigious mention wasn’t enough for him. Those interviewed for the documentary spoke of his commitment to dining and excellence and his attitude of “raising the bar.” One of those interviewed is his long-time sous chef Reginald Watkins. As sous chef, Watkins was the top assistant in Trotter’s kitchen, the one closest to him in many of the daily machinations of running the restaurant.

Watkins turned out to be an unlikely companion and confidante to Trotter and would be considered by some as the ‘backbone’ of the kitchen for 24 years. He was a young, Black Triton College student from the South Side’s Bronzeville area when he first stepped into Charlie Trotter’s in Lincoln Park in 1987 to answer a dishwashing ad; slowly making it up the ladder under Trotter’s stern guidance until he left in 2011. Watkins admits in the documentary that he wouldn’t lie about his cooking expertise to Trotter upon first meeting him. Watkins added that he figured Trotter would find out soon enough. But this inexperience didn’t hurt Watkins, as he excelled in all things related to running Trotter’s restaurant.

The documentary reveals that Watkins travelled for more than two hours to get to the restaurant. Trotter’s generosity was also revealed when he paid off Watkins’ Triton tuition. Watkins died in September 2020 at the age of 64, and a Chicago Tribune article shared quotes from his daughter and former co-workers:

“He was a legend in his own right,” said his daughter, Lerita Watkins. “He was a real icon at that restaurant,” echoed chef David LeFevre, who worked two stints at Trotter’s kitchen between 1995 and 2004. Trotter and Watkins became close friends. “We always envisioned those two getting old together,” said LeFevre.

The newspaper also wrote: “Following news of his death, many former co-workers from Trotter’s and beyond shared heartfelt memories and regards on social media about ‘Chef Reggie,’ a man they remembered as being tough but gentle — and a necessary guide to help young chefs survive what was a notoriously demanding kitchen environment.”

This review isn’t to take away from the magnificence and culinary contributions of Charlie Trotter, but my eagle eye always picks up on other details when I am screening a film. As much as Trotter revolutionized fine dining in the Chicago area and for other chefs who emulated him the world over, I am reminded of a mantra—with a twist—the old saying, “behind every good man, there is a good woman.” In this case, “behind every great chef is an even great sous chef.”