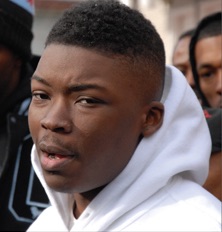 Little JaMal Green, the sometimes BLM activist, sometimes, union activist, sometimes police reform activist, sometimes, youth spokesman, sometimes, Negro confidant to a racist mayor, and sometimes political candidate, has a hard-on for Mayor Lori Lightfoot. Someone who don’t like the young man, claims he is just “clout chasing” because he is doing all of this to “get noticed.” This same person says Green just “goes after issues so he can be in the spotlight” and his “rage is off and on.” The fellow then elaborated, “How you gonna be protesting the mayor and being on his speed dial at the same time? We know he was working for Rahm Emanuel and for all we know he might be doing the same for Lightfoot.” When asked if they thought the would-be city council member or mayor is just a “straw man” the guy said, “hell yeah.” A woman wearing a doo-rag added her two cents by saying, “He came out of nowhere, pretending to come from the ghetto. We know his family’s connections to house music. We know his sister was doing hair out of her apartment. We know he showed up with a new car and a new house and we couldn’t figure out how he came up with them. I think if he runs he’s just running game. It’s fake—and not real.”

In his latest attack on the mayor, Green goes off on the city’s plan to target violent, gang members by taking their assets or those of the people who let them live under their leases. While the idea is indeed racist at its roots, we understand that Lightfoot is being pressured by everybody and their mama to do something about the shootings, car-jackings, and murders that keep Chicago in the national news. JaMal, who has been locked up before, feels that instead of going after gang members, Lightfoot should go after poverty, poor schools, and a lack of quality food in the ‘hood. Even though he represents no discernable organization, has no discernable members and no discernable income beyond the alleged “public/private partnerships.”

Mr. Green was recently known for clowning Lil Larry’s alleged domestic issues by using his computer and a social media program to tell the world all he knew. Somebody else (not the two above) pointed out that the little leader must be “Real tight with the FOP” because “how would he have access to police information like that?” JaMal also was the genius behind asking Chase Bank to pay reparations to Blacks throughout the world in the amount of less than $50,000 per person. After the one Black Chase employee told the white folks that the 25-year-old activist probably only represented three people in total, they then banned him from their facilities. No one knew if he got a reparations check out of the deal.