50 dead of COVID-19 in one week in Black neighborhoods 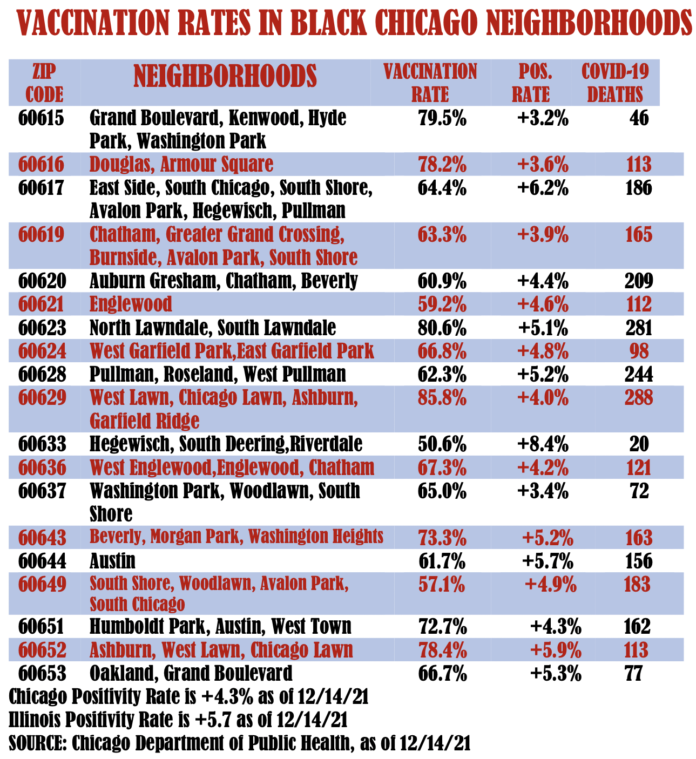 A disturbing surge in COVID-19 deaths and new coronavirus cases has gripped many Black neighborhoods in Chicago as the holiday season swings into high gear with parties and indoor gatherings.

A Crusader analysis of public health data reveals that in just one week beginning on December 5, approximately 50 people died in zip codes that include predominately Black neighborhoods on the South and West sides.

Public data also show nearly all 20 Black zip codes have higher positivity rates, not seen since the deadly surge in January 2020, when Blacks in Chicago had the highest number of COVID-19 deaths, more than any other ethnic group in the city.

The recent 50 COVID-19 deaths came from zip codes on the South Side.

Amid the multiple COVID-19 deaths, Austin (60644) on the West Side lost just one person to the disease for the week beginning December 5.

Since the pandemic began in 2020, the Crusader has kept a weekly database of COVID-19 deaths, cases and coronavirus tests in 20 zip codes on the South and West sides. The data includes information from the Chicago Department of Public Health, which updates their statistics by 5:30 p.m. Monday through Friday.

The zip code that had the highest number of deaths is 60620, which includes Auburn Gresham, Chatham and Beverly. Calculations based on data from the Chicago Department of Public Health show 10 people died of COVID-19 in just one week beginning in December.

The positivity rate now stands at 4.4 percent, higher than the city’s 4.3 percentage rate.

In that same week, five people died of COVID-19 in zip code 60652, which includes Ashburn, West Lawn and Chicago Lawn.

Most of the zip codes that have experienced multiple COVID-19 deaths also have positivity rates that remain higher than the city. They are among 13 zip codes where the coronavirus is spreading faster than elsewhere in the city.

Four zip codes are higher than the state’s positivity rate of 5.7 percent.

They include Riverdale, which shares zip code 60633 with Hegewisch, the positivity rate there is 8.4 percent, the highest among the 20 Black zip codes.

The Delta variant remains the dominant mutation in the COVID-19 coronavirus and new cases. But things may get worse as the fast-moving Omicron variant is making its way through the U.S. at a time when airline travel is expected to top last month’s Thanksgiving holiday travel.

Meanwhile, Black neighborhoods remain vulnerable as vaccination rates remain the lowest in the city, especially in South Shore (60649), Englewood (60621) and parts of Riverdale and Hegewisch (60633).

This week, city health officials announced that booster shots were available at select events for 16- and 17- year-old residents.

In South Shore’s Jeffery Plaza, a small crowd of people waiting to get tested at a small testing station that had been set up in the parking lot since the summer.

On Tuesday, December 14, CDC officials warned of an anticipated tidal wave of infections next month from both the Omicron and Delta variants.

The city’s indoor mask mandate remains in place. Last weekend, two nightclubs were cited after they were accused of violating the city’s mask mandate after investigators from the Department of Business Affairs and Consumer Protection (BACP) conducted 63 investigations to see if people were wearing masks and whether there were signs posted about the requirement. They include Fame Supper Club, 157 W. Ontario St. in River North, and El Capitan Restaurant at 3754-58 W. Armitage Ave. in Logan Square.