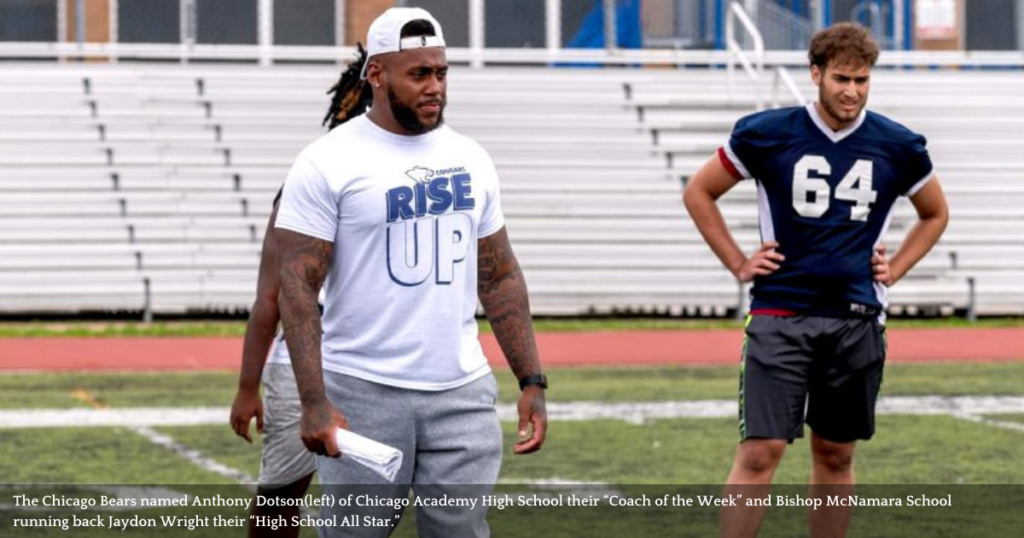 In a recent announcement, the Chicago Bears named Anthony Dotson of Chicago Academy High School their High School “Coach of the Week” for Week 6, and running back Jaydon Wright of Bishop McNamara School in Kankakee their “High School All-Star.”

To close out the month of September, senior running back Jaydon Wright helped lead his team, the Bishop McNamara Fightin’ Irish (3-3), to a 58-19 away conference game win against the Aurora Central Catholic Chargers (1-5) of Aurora, extending the team’s streak to two conference wins in a row.

Throughout the game, Wright broke two school records, including most touchdowns (8) in a single game, previously held by his cousin Jonathan Ward with seven in 2015 and who is currently playing for the Arizona Cardinals, and the single-game rushing yards (447) record, previously held by Tyrone Noble with 392 yards in 1992, on just 24 attempts.

The Fightin’ Irish currently sits in third place in the Metro Suburban Blue Conference as they play the St. Francis Spartan (6-0) on Friday, October 14.

In October, coach Dotson helped lead his team, the Chicago Academy Cougars (4-2), to a 34-0 away conference game victory against the Roosevelt Rough Riders (1-5) of Chicago.

This victory places the Cougars first in their Chicago Public Blue North Conference for the first time in school history and their first conference championship. Dotson, a Bronzeville native, was promoted as Chicago Academy’s Head Coach in the Spring of 2021 after being an assistant for two years. Coming into his second season as head coach, he helped the Cougars to back-to-back winning seasons after the team only had three winning seasons since 2004.

Outside of football, Dotson is a Dean of Students who promotes a positive environment for student learning and development by implementing and monitoring positive behavior intervention support programs. He guides his students/athletes on the right path by using personal stories that can help motivate them.

About “Coach of the Week” and “High School All-Star”

Deserving high school coaches and players are nominated by a panel of local prep authorities, and the winning player is selected each week from August 26-October 22.

Since the program’s inception, the Bears have donated more than $346,500 to Illinois high schools in support of their football programs. For more information, visit chicagobears.com/community.

The “Coach of the Week” and “High School All-Stars” programs are sponsored by Athletico Physical Therapy.