Building manager has boiler explosions in Chicago and Gary buildings 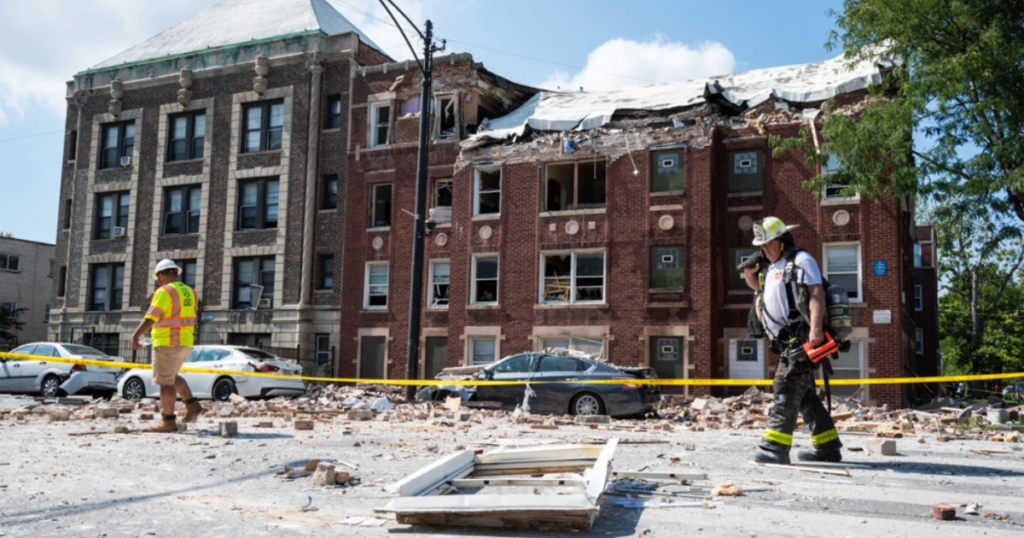 The manager of the building in Chicago’s Austin neighborhood where an explosion and roof collapse led to the death of one resident last week also manages Marquette Apartments in Gary’s Miller section, whose residents were displaced in February by a boiler explosion.

Dozens of families were also displaced in the 35-unit apartment building at 5601 W. West End Ave in Austin, managed by Urban Alternatives.

The blast happened just after 9 a.m. Tuesday, September 20. It collapsed part of the roof and blew out most of the building’s windows; showering brick, glass and dust onto cars and the street below.

Peoples Gas, which responded to the scene shortly after the explosion, said its service site was working properly at the time.

“There remains no reason to believe any of our equipment – or any other part of our system — was responsible for the incident. As a reminder, piping and appliances inside the building are the responsibility of building management and/or residents,” the company said in a statement.

According to Block Club Chicago, a news website, “The building has failed 12 Department of Buildings inspections since February 2010, city records show. The most recent failed inspection, from 2020, says there were six building code violations, including for the inspector not being able to get entry into most of the apartments or being able to verify there were detectors.”

Urban Alternatives is refunding September rent to all residents and has offered move-in ready apartments with “comparable rents” to all 31 families who were displaced, according to a statement.

“We are sad to hear of the passing of one of our residents,” Roman Viere, owner of Urban Alternatives, said in a statement. “Our prayers and thoughts go out to his family.”

Residents of Marquette Apartments, an Urban Alternatives managed property in Gary’s Miller section, were displaced by a boiler explosion on February 6. There were no injuries to residents. For nearly a month, the 48-unit building at 405 Huntington Avenue was without heat.

Urban Alternatives Tom Viere said his company decided the boiler needed replacing, not repairing. Residents who remained in the building were given space heaters.

“We had various investigators — from the insurance company, the city — and no one was able to pinpoint the exact cause. We had mechanical contractors in and were supposed to had 2 new boilers last week,” Viere said. “Then we were promised delivery Monday. We’re still waiting.” That was February 23rd.