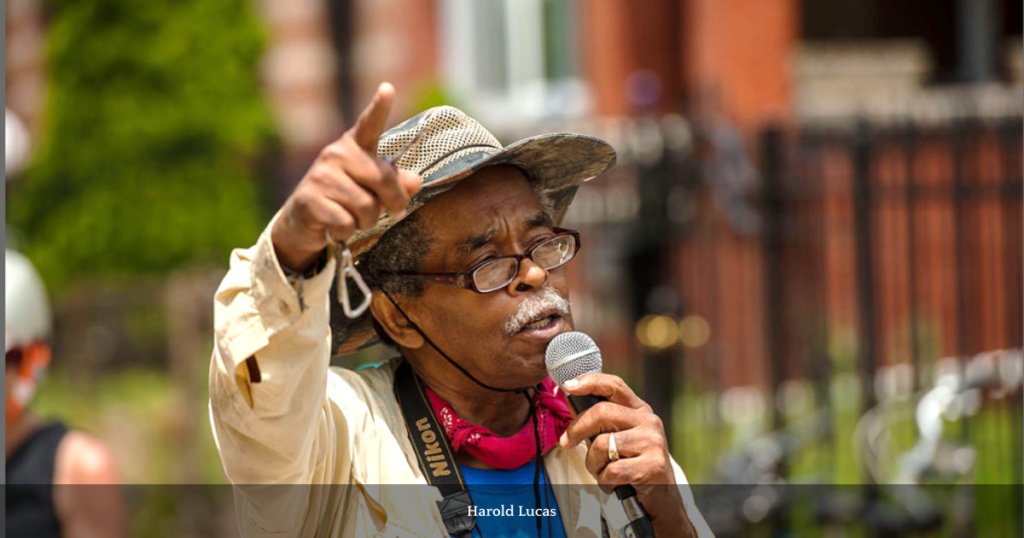 The past and future of ‘Black Metropolis’ was the focus of a Sept. 28 memorial service for the late Harold Lucas, known as the “Godfather of Bronzeville” for his unwavering commitment to economic development and community control. The businessman and community activist died this year on August 9 at the age of 79.

The three-hour tribute was organized by Nate Thompson, author of “Bronzeville Kings,” and himself a long-time champion for community control and Black self-determination. “Harold put in 40-plus years of service in our city. It was not a hobby,” Thompson said. “He really believed where there is no work there is no progress.

“It is now our turn to pick up that baton and continue his work,” he said. “That’s what this is all about–that these children have something to hold onto. It has been a complete struggle trying to save Bronzeville and what’s left of it. So, it is imperative that we all join together to complete Harold’s work.”

Lucas was founder and chairman of the Black Metropolis Convention and Tourism Council (BMCTC), which he operated out of his home/office at 444 E. 48th Street, Apt. 1E, as an advocacy and economic development organization. As his reputation for being a no-nonsense agitator increased, his home became central to local organizing activity and cultural expression.

Bronzeville, historically known as the “Black Belt,” is the center of African-American history on Chicago’s South Side and a major focus of the Great Black Migration. Located 10 minutes from downtown Chicago, the neighborhood expands from 31st Street south to Pershing Road and east from the Dan Ryan Expressway to Lake Michigan and then south of 67th Street.

The community is to Chicago as Harlem is to New York City. And just like its counterpart on the East Coast, Bronzeville has struggled to maintain its cultural expression in the wake of progress and changing demographic patterns. Due to rampant disinvestment and structural racism, the neighborhood is a shell of its former heyday but has recently, due to the efforts of a diverse coalition of advocates, seen a resurgence.

In its heyday, Binga Bank, the largest US. financial institution owned by an African American operated at its mouth and was the centerpiece of Chicago’s Black Wall Street.

Gone are the Black-owned banks, brokerage houses, nightclubs, insurance companies, restaurants, arts organizations and famous residents from the world of sports, music, religion, theatre and film. According to the U.S. Census, today there are about 24,919 residents in Bronzeville with a median household income of roughly $40,000. About 7,000 residents live below the poverty line.

It was a community where Lucas lived, raised his family thrived before he was slowed by the 2020 pandemic and the onset of cancer and other health challenges. Months before his passing, he spoke to the Crusader about the significance of house-museums and reaffirmed his wish to see Bronzeville vibrant and the center of Black life.

The memorial setting took on special meaning when Bowen reminded the gathering that Lucas was the reason the school building and its programming to honor Black military veterans and heroes existed but he also had another major credit to his name. “Harold could be a real you know what, especially for those of us who had been in the administration and been around for a long time,” said Bowen. “When I was with the mayor, Harold was always knocking on our door for something. A lot of times we don’t give a guy a lot of credit but …one of the best things Harold did–and many won’t know this–he was responsible for this area being designated as Bronzeville.”

Bowen gave a 1994 history lesson when he noted Mayor Daley had formed a Cultural Center committee to identify a new and official destination for the area but the group was having trouble coming up with suggestions. “Harold said ‘Chuck we need to have a destination. The Chinese have Chinatown, the Italians have Little Italy and so forth. (Black people) need a destination that is named at the EL station and on buildings (that represent us). Harold is the reason this community is called Bronzeville today. He called that committee and he advocated and that’s how this became the destination for this area,” he said.

The memorial service was the second of what friends claim will be a series of annual events to commemorate the life of a man who almost single-handedly protected his believed community from gentrification, disinvestment and a pirating of Black arts and culture.

Though Bronzeville lost considerable landmarks such as the Palm Tavern, the Regal, Savoy and Met theaters, as well as the original Provident Hospital building, Lucas and a small army of colleagues were successful in saving a number of historic facilities and residents. Along with late 3rd Ward Committeewoman Bobbi Johnson, Lucas was credited with saving the Rosenwald Building at 47th Street and Michigan. It was later converted into an apartment building.

Lucas historically chained himself to the Met, 4644 S. King Drive, in an attempt to stop its demolition which ultimately happened in 1997 after a lengthy and ugly fight. The Regal was demolished in 1973 and the Harold Washington Cultural Center, spearheaded by then 3rd Ward Ald. Dorothy W. Tillman, sits in its place.

Lloyd, who is president of the development firm Urban Juncture credited Lucas with saving “The Forum” from demolition. The 125-year-old hulking, brick, red building at 43rd Street and Calumet was the hub of Black entertainment, business and culture of Bronzeville for more than seven decades until it closed and fell into disrepair.

“On September 28, 1897, the Forum opened its doors and it was the first major assembly hall built on the mid-South Side (before Bronzeville was Bronzeville),” Lloyd explained. “This building is here today because of Harold. About 11 years ago there was a community meeting and Harold, as was his approach, stood up in the middle of the meeting and said, ‘Look the Forum is about to be torn down. We must save this building!’

“I got up and said, ‘I tried but the owners are not trying to sell this building and there’s nothing we can do,’” Lloyd recalled. “But after listening to Harold’s words, I slept on it that night and I went back to that building owner the next day and in fact, we were able to strike a deal and keep the demolition balls from hitting that building which was going to happen in a matter of weeks.

“Harold knew what we had with that building as he’s known with so many buildings. That building is such a unique asset, such a gem in our community that if we were to lose it we’d lose such an important link and platform for our community,” the developer said.

Born November 1, 1942, the son of a Pullman Porter, Lucas grew up in the Ida B. Wells housing development and graduated from Hyde Park High School in 1960. Combining his love of history and entrepreneurism, he read about “Black Metropolis,” in a sociological study by Sinclair Drake and Horace Cayton, and often credited the work with inspiring him to get involved.

After owning several businesses, including a bar and a digital publication and archive, Bronzeville Online. A frequent caller into WVON-M, Lucas was eventually barred from calling the news-talk station for a period. He took his highly charged messages to the pages of South Street Journal where he wrote a column and contributed to the small paper’s community beat.

In 1996, he created the Black Metropolis Convention and Tourism Council (BMCTC), a marketing organization with the mission to develop Bronzeville as an international African American heritage and tourism designation. According to Thompson, one of its board members included the late author and real estate magnet Dempsey Travis. The collective worked to secure federal support and congressional designation as a national heritage area. U.S. Representative Bobby L. Rush and his Illinois colleagues in the U.S. Senate issued HR670 and SB511, respectively, to support the efforts.

Col. Eugene Scott, who ushered in the rebirth of the Chicago Defender in the 1990s and led the newspaper’s charitable arm, created the campaign called, “The Mayor of Bronzeville” which elected radio DJ Herb Kent as its mayor. “I was in charge of revitalizing (the paper) and I was encouraged to meet with him. I asked him a simple question: ‘How can I fix the Defender?’ (Harold) said ‘you must give it back to the people because that’s where it came from,’” he recalled. “I knew what he meant by that–stories about the community written in the paper, about all of the great things that we do, our marriages, our awards and things. Put them back into the paper and make it a paper of excellence.”

Walter Freeman chairs the Bronzeville Trail Taskforce, a group with the mission to ensure Bronzeville residents had access to the internet. Freeman said he worked with Lucas in the 1990s. He said, “I can’t put a dollar figure on what Harold brought to me personally or what he did for this community. We once flew to Washington, D.C., to meet with Commerce Secretary Bill Daley to advocate for internet access for (underserved communities. That experience and many others with Harold really inspired me to do this work and what I’m doing today.”

Added Paula Robinson, executive director of BMCTC, “We need to give ourselves credit as a community for all of the things that we’ve accomplished,” she said. “The armory, the Supreme Life Building, the Overton–all those buildings have now been restored for adaptive re-use. There is no one willing to give us applause for our work but us.”

The Bee Building was home to a Black-owned newspaper owned by Anthony Overton in 1925. The art-deco structure was restored and repurposed as the Chicago Bee Library. In 2007 it was recorded in the National Register of Historic Places.

Activists also said it was a misnomer to believe Lucas was ahead of his time. They said his outspoken advocacy was relevant and necessary given the power players and political obstructionists that many community residents felt they were up against.

“He was not ahead of his time… the rest of us were just slow in catching up to him,” Thompson said. “He could be a major pain in the ass. He argued and fought with everybody who came in his way. But I wish I had a hundred guys like him because that is the exact kind of fire that we need in this community and we needed it to save the things we did.”

Thompson said, “It wasn’t just about brick and mortar with Harold. He was passionate and was very concerned about the state of Black boys, as well as the state of politics in this city. The 2nd Ward got relocated to the North Side from here. It was the ‘mother ward’ of Black politics in this city and it was where all Black political power emanated from–so that was a strategic move to relocate the ward up North.

“But, we, as a people, are still here in this geographic location fighting for what’s important. That’s what Harold did and that’s what we will continue to do,” he said.

Reporting made possible by the Inland Foundation.