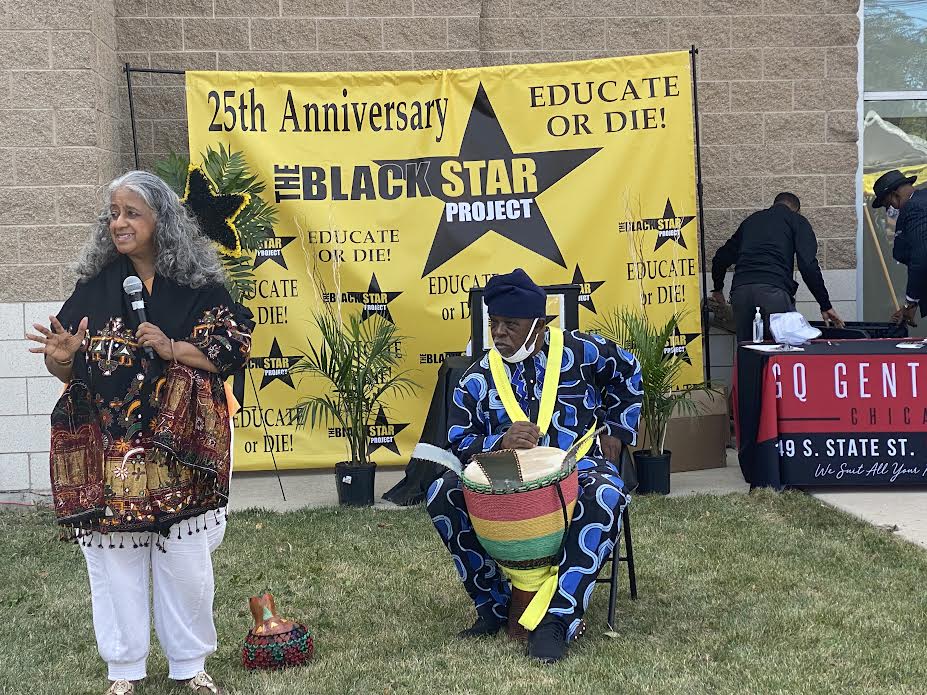 The thumping sounds of the drums and African-clad dancer on stilts kicked off a festive afternoon of tributes, music and food as the Black Star Project (TBSP) in Bronzeville honored the memory of its late founder Phillip Jackson at its 25th Anniversary celebration.

Dignitaries and community leaders joined the celebration in a parking lot behind the organization’s headquarters in the historic Supreme Life Insurance building at 35th and King Drive, known as Phillip Jackson Parkway.

A beloved community leader, mentor and hero to many youths, Jackson would have turned 71 last month. He died in 2018 after fighting cancer. But his legacy lives on in the hearts of those who knew him, his work and his contributions in helping thousands of youths overcome economic and social barriers to achieve their dreams.

More than 100 people attended the three-hour event, including Crusader Publisher Dorothy R. Leavell and husband John Smith. The event included vendors offering everything from pumpkins to barbeque ribs. People swayed and danced as a live band played throughout the afternoon.

The Black Star Project Executive Director Gloria Smith, who is Jackson’s sister, said her brother “was insistent that young people be aided and uplifted—not only by their parents, but by their community. Nowhere did this belief shine brighter than in Phillip’s founding of the Black Star Project.”

Joanne Jackson Crenshaw, who is also Jackson’s sister, said her brother was still trying to change the world from his hospital bed before losing his battle with cancer in 2018.

“Twenty-five years and we’re still here, still relevant, still necessary. And if my brother was still here, this would be his testimony,” Crenshaw said. “He was committed until his death … directing Starbucks protests, supporting Black coffee shops, pushing for the circulation of Black dollars in the Black community. He’s not here on a physical plane, but I can feel his spirit.”

“I want to particularly express my appreciation for the life of Phillip Jackson. I got to know him as an alderman for the city of Chicago. He was a right-hand person to [CPS Chief ] Arne Duncan in our public schools. He and Arne were very helpful in the work that we tried to do in improving the quality of education available in the 4th Ward.”

Carmelita Lightford Hubbard, sister of State Senator Kimberly Lightford (D-IL), presented Jackson’s family with a special proclamation from the Illinois Senate. The honor recognizes Jackson and the Black Star Project for their work.

The Crusader honored Jackson with its “Heroes in the ‘Hood” award in 2017.

Jackson founded the Black Star Project (TBSP) in 1996 to provide educational services that improve the lives of less-advantaged Black communities and to close the racial academic achievement gap. TBSP accomplishes its mission by educating, organizing and mobilizing parents and volunteers, and working with community partners to facilitate a wide variety of solid programs, high-visibility campaigns and other special initiatives.

After receiving a Bachelor of Arts in Philosophy, with honors, from Roosevelt University in 1974, he was quickly promoted from stock clerk to assistant manager at Kroch’s and Brentano’s Bookstore, where he had been employed since 1969.

In 1995, he joined the Chicago Public Schools (CPS) transition team with Paul Vallas. During his five-year tenure, he served as Deputy Chief of Staff, Director of Intergovernmental Affairs, and Chief of Staff. Jackson helped CPS achieve the highest number of contracts in Chicago history with businesses owned by Blacks, Latinos and women.

In 1999, Jackson became the CEO of the Chicago Housing Authority (CHA). During his dynamic stewardship of the CHA, Jackson negotiated a $1.6 billion deal with the federal government to transform public housing in Chicago with a focus on residents’ quality of life, not just the bricks and mortar.

Following this concept, Jackson worked to improve the living conditions in public housing for the youth residents. He even made certain that all children received gifts of books around the holiday season. His hands-on approach included driving to every building multiple times each week to talk with residents and to take note of the status of the grounds and repairs.

He designed an award-winning summer school program from which 92 percent of failed 8th-grade participants made sufficient summer progress to be promoted to high school. The average success rate for the same population citywide hovered around 63 percent.