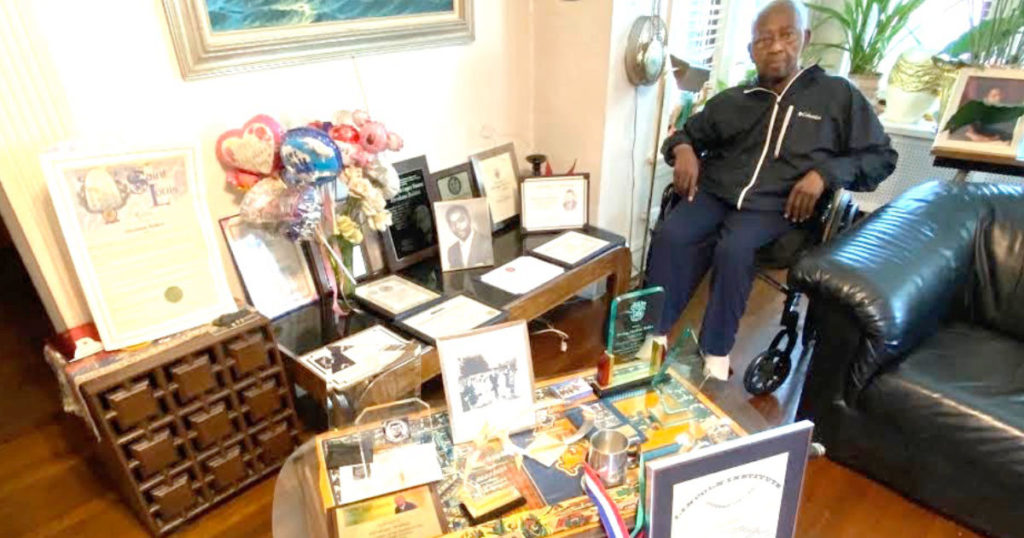 Nearly 60 years after he was framed by racist government officials, Chicago resident Abraham Bolden, who became the nation’s first Black Secret Service agent during the start of the Civil Rights Movement, has been pardoned by President Joe Biden.

The historic announcement from the U.S. Department of Justice April 26 ends a national movement by activist Roosevelt Wilson that included a series of articles by several Crusader journalists who reported on an injustice that went unaddressed for decades.

As he fought to clear his name, Bolden’s son Abraham Bolden, Jr., 61, died in August, 2020. Bolden’s daughter Ahvia Reynolds died two months later at 63. Both had cancer. His only surviving child, Dr. Daaim Shabazz, 59, is a professor at Florida A&M University.

There was concern that Bolden himself might not live to see that happen as he struggled with serious health issues at 86 years.

In May, 2021 the Crusader reported that Bolden gets around in a wheelchair and is totally blind in his left eye. He’s had several eye operations and is a prostate cancer survivor. But despite his struggles, Bolden remained hopeful that he would be pardoned some day. Last January, Wilson held an 86th birthday celebration for Bolden via Zoom.

Now, the real celebrations begin as Bolden rejoices in a moment long overdue. As a pardoned, pioneering American, Bolden no longer has a criminal record.

From his longtime home in Auburn Gresham, Bolden released a statement through his caregiver. “We are grateful and happy that this day has come, but I just wish my children were alive on this occasion.”

Wilson is now working on getting President Biden and Congress to award Bolden the nation’s highest civilian honor, the Congressional Gold Medal for his courage and years of service.

Speaking on WVON hours after the announcement Tuesday, Wilson said Bolden called him the night before President Biden’s announcement to “say something is going to happen in the morning. I don’t know what it is, just be by the phone. I didn’t sleep last night and tossed and turned.”

At 7:35 a.m. Wilson said he got a text message from the U.S. Justice Department, informing him of the pardon.

It was the end of decades of frustration for Wilson, who failed to get five U.S. presidents to pardon Bolden.

Not even the nation’s first Black president, Barack Obama, responded to Wilson’s plea to pardon a man who dedicated his life to protecting President John F. Kennedy.

Over the years Wilson persevered in getting Bolden pardoned even as prominent Black leaders and Black elected officials from the Congressional Black Caucus ignored his pleas for help. Congressman Danny K. Davis pledged to help Wilson get President Biden’s support.

The Crusader documented Wilson’s efforts with a series of articles written by Jayson Coyden Palmer, Erick Johnson and Wilson himself. The most recent article was published in February this year, where Wilson called on South Carolina Congressman Jim Clyburn to use his political influence as an advisor to President Biden to get Bolden pardoned.

Two months earlier, the Crusader published Wilson’s article, in December 2021. Titled, “When will Abraham Bolden’s Record be Expunged,” the OpEd piece compared Bolden’s situation to that of other prominent Black Americans unjustly treated by the criminal justice system. He noted the injustices of the late Khalil Islam and Muhammad Aziz, 83, who was arrested and imprisoned for 20 years and paroled for 36 years.

Born in East St. Louis, IL, in 1960 Bolden became a member of the United States Secret Service. The next year President John F. Kennedy tapped him as his Secret Service agent whose responsibility was to protect the Commander-in-Chief.

In 1961, he was given a temporary assignment to guard President Kennedy during an event with Mayor Richard J. Daley at Chicago’s McCormick Place. Impressed with his work, President Kennedy on April 28, 1961, invited Bolden to join his White House detail as the first Black to protect the president.

It was the first time in American history that a Black man had been given the job.

It was also at a time when the Civil Rights Movement had yet to gain momentum, after Black votes helped Kennedy into office as the nation’s youngest president.

But on May 12, 1964, Bolden was accused of and charged with attempting to sell a secret government file to Joseph Spagnoli, Jr., in exchange for $50,000. Spagnoli was named as the head of a counterfeiting ring.

Days after his arrest, Bolden called a press conference at his home in Auburn Gresham to publicly accuse the government of trying to frame him.

During a hearing with the Warren Commission investigating the assassination of President Kennedy, Bolden testified that the president’s agents drank heavily before and after tours of his summer home in Hyannis Port, Massachusetts. Bolden also accused the White House and Secret Service of not doing enough to protect President Kennedy before he was assassinated in Dallas in 1963.

In July, 1964 Bolden’s first trial ended in a hung jury after the only Black female juror refused to find him guilty. Prosecutors tried Bolden again in a second trial the following month. On August 12, 1964, he was found guilty of accepting a bribe and sentenced to six years in prison. He was also fired from the Secret Service that same month.

In 2008, Bolden talked about his experience in his memoir, The Echo From Dealey Plaza: the true story of the first African American on the White House Secret Service detail and his quest for justice after the assassination of JFK.

At his own trial in January 1965, Spagnoli, the man from whom he was accused of soliciting bribes, admitted that federal prosecutors had asked him to lie about the case. Bolden quickly appealed and requested a new trial. He was denied and began serving a six-year sentence in 1966.

Bolden eventually served over three years in prison and was paroled, after which time he served two and a half years of probation.

Today, Bolden is a free man. But 57 years after he was found guilty, the conviction remains on his record. He found a friend in Roosevelt Wilson, a retired educator, who contacted Bolden in 1967 after learning about his case. He has been fighting for Bolden’s pardon ever since.