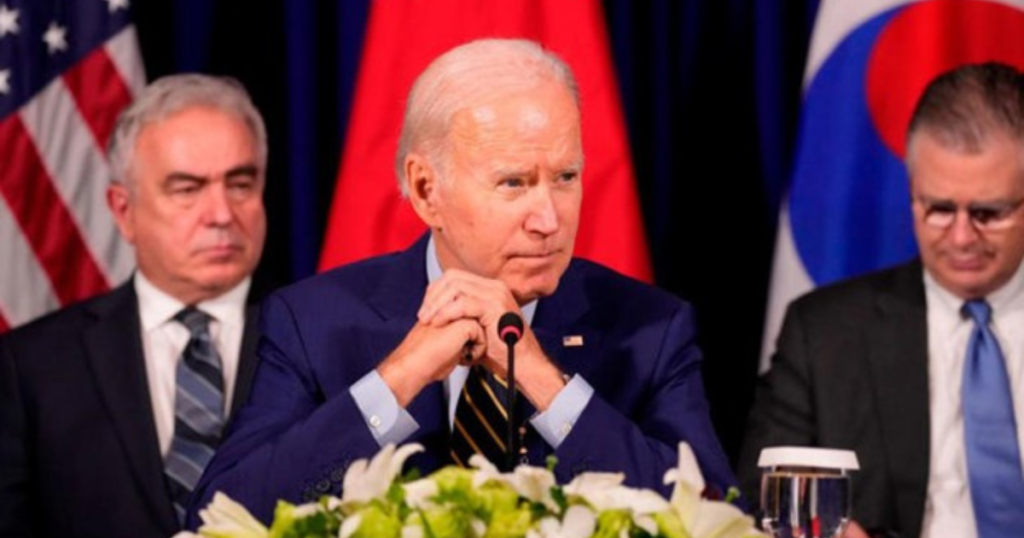 President Joe Biden landed in Cambodia on Saturday still reveling in midterm election results that have produced an unexpected boost at home for his second two years in office.

A day after he arrived in Asia, he got another piece of news from back home that could give him a lift through the rest of his international swing – CNN and other outlets projected his party would retain control of the Senate.

“We feel good about where we are. And I know I’m a cockeyed optimist,” he said from his hotel lobby on Sunday after the projection.

Yet the scale of the challenges abroad, and the effort to translate 21 months of intensive engagement into tangible results for US alliances, will put the value of that political capital on the international stage to the test even as votes are still being counted.

“For years, our countries have been engaged in trilateral cooperation out of a shared concern for the nuclear and missile threat North Korea poses to our people,” Biden said at the start of three-way talks.

“As North Korea continues provocative behavior, this partnership is even more important than it’s ever been,” Biden said.

Biden also met with Kishida and Yoon individually before their trilateral meeting.

Biden’s stop at an Asian nations summit comes as advisers see a clear boost from bucking the historical and political trends in the midterm elections. While Biden’s message won’t shift dramatically, the weight behind it is unmistakably more robust after American voters delivered a message that surpassed the hopes of even the most optimistic White House officials.

Biden previously met Kishida and Yoon together on the sidelines of the NATO Summit in June, pledging to enhance cooperation – a complicated task for the major US allies that have a historically fraught relationship.

But that cooperation is imperative as recent, stepped-up aggression from North Korea will be top of mind for the trio of leaders Sunday. North Korea has conducted missile launches 32 days this year, according to a CNN count of both ballistic and cruise missiles. By contrast, it conducted only four tests in 2020, and eight in 2021.

National security adviser Jake Sullivan suggested Saturday the meeting will not lead to specific deliverables, telling reporters aboard Air Force One that the leaders will “be able to discuss broader security issues in the Indo-Pacific and also, specifically, the threats posed by North Korea’s missile and nuclear programs.”

The trilateral comes one day ahead of a high-stakes, one-on-one meeting for Biden with China’s leader Xi Jinping, their first in-person encounter since Biden took office. That meeting will take place on the sidelines of the G20 summit in Bali.

Speaking to reporters Sunday morning, Biden said he was entering the meeting with Xi in a position of relative strength.

“I know I’m coming in stronger,” he said, noting he knew Xi well and there was “very little misunderstanding” between the two leaders.

“We just got to figure out what the red lines are and what the most important things are to each of us going into the next few years,” Biden said.

Biden, Yoon, and Kishida were also set to discuss Monday’s meeting during the trilateral meeting.

“One thing that President Biden certainly wants to do with our closest allies is preview what he intends to do, and also ask the leaders of (South Korea) and Japan, ‘What would you like me to raise? What do you want me to go in with?’” Sullivan said, adding that it “will be a topic but it will not be the main event of the trilateral.”

A day ahead of meeting Xi, Biden underscored “the United States will compete vigorously with (China) and speak out regarding (China’s) human rights abuses, while keeping lines of communication open and ensuring competition does not veer into conflict.”

This leg of the trip, a senior administration official told reporters on a call earlier this week, reflects “stepped-up engagement with ASEAN and with Southeast Asia” during the Biden administration.

Biden, the official added, will “lay out our vision for keeping up a pace of enhanced engagement and trying to also address concerns of importance to ASEAN in ways that they are looking for,” keeping with an ongoing theme during the Biden presidency of building alliances in strategic competition with China.

Among the key topics of discussion this weekend in Cambodia, the official said, is the ongoing conflict in Myanmar, where the military seized power in a coup last year.

World leaders will discuss “efforts to promote respect for human rights, rule of law and good governance, the rules-based international order, and also to address the ongoing crisis in Burma.”

“This is my third trip, my third summit – second in-person, and it’s testament to the importance the United States places in our relationship with ASEAN and our commitment to ASEAN’s centrality. ASEAN is the heart of my administration’s Indo-Pacific strategy. And we continue to strengthen our commitment to work in lockstep with an empowered, unified ASEAN,” Biden said in brief opening remarks as the summit began.

On Friday, Biden made a three-hour stop in Sharm El Shiekh, Egypt, where he attended the COP27 climate summit and met with Egyptian President Abdel Fattah El-Sisi.

This story first published by CNN.