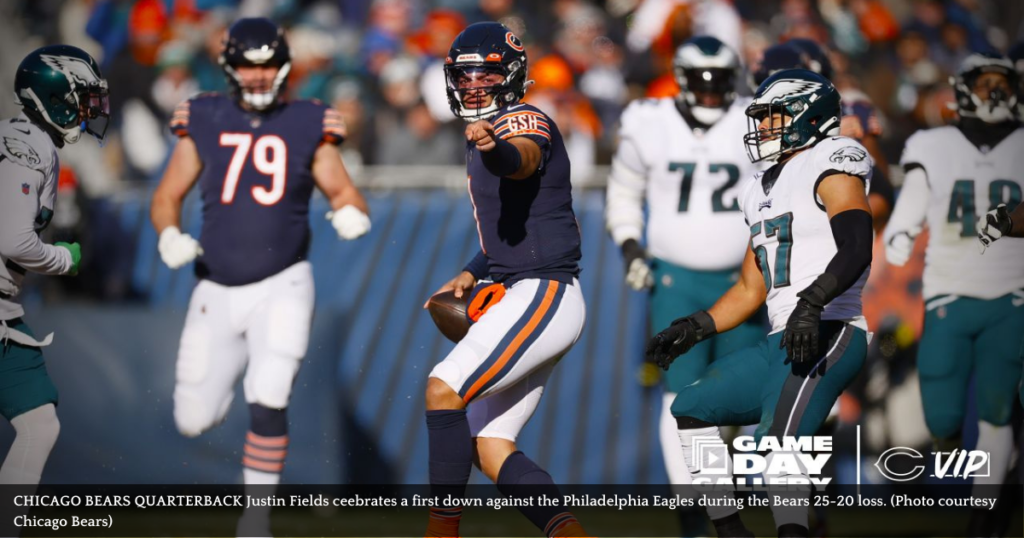 The Chicago Bears lost to the Philadelphia Eagles 25-20 on Sunday, December 18, at Soldier Field.

In spite of the loss to the Eagles, the Bears were led by quarterback Justin Fields, who became the third quarterback in NFL history to rush for 1,000 plus yards in a single season. Fields reached the 1,000-yard mark with a one-yard rush with 7:53 remaining in the fourth quarter.

According to the Chicago Bears, Fields finished the afternoon going 14-of-21 passing from the field with 152 yards and two touchdowns, while also rushing 15 times for 95 yards. He finished with a passer rating of 119.5, which is the second-best passer rating he’s recorded in a single game in his career.

Sunday marked his fifth consecutive game with 70 plus rushing yards, the longest streak by any QB since at least 1950 (according to @NFLResearch).

The Bears found the end zone midway through the second quarter after running back David Montgomery rushed for a nine-yard touchdown, his fifth of the season and 26th of his career. His 26 career rushing touchdowns are tied with Willie Gallimore and Hugh Gallarneau for sixth-most in Bears franchise history.

Montgomery’s touchdown was set up after the Bears moved into the red zone following a 39-yard scramble by Fields. That rush passed Bobby Douglass’ 968 rushing yards in the 1972 season to become the new single-season rushing record by a Bears quarterback.

Montgomery scored his second touchdown of the day with 8:50 remaining in the third quarter, hauling in a 10-yard reception from Fields. He’s caught four touchdown passes in his career and has 30 career touchdowns rushing or receiving to his name, which ties Red Grange for the ninth-most touchdowns from scrimmage by a running back in franchise history.

In addition to the pair of touchdowns, Montgomery rushed 12 times for 53 yards, while also catching three passes for 38 yards.

Fields threw his second touchdown pass of the day with 2:52 remaining in the fourth quarter, connecting with a wide receiver on a 35-yard touchdown pass.

Chicago forced a turnover on the Eagles’ opening drive of the game, as rookie defensive back Kyler Gordon intercepted Jalen Hurts with 7:26 remaining in the first quarter. Gordon now has two interceptions in his first NFL season. Hurts entered Sunday’s contest with just three interceptions.

Linebacker Nicholas Morrow led the defense with 11 combined tackles (nine solo), one of which came for a loss. Bears long snapper Patrick Scales played his 100th career game in a Bears uniform.