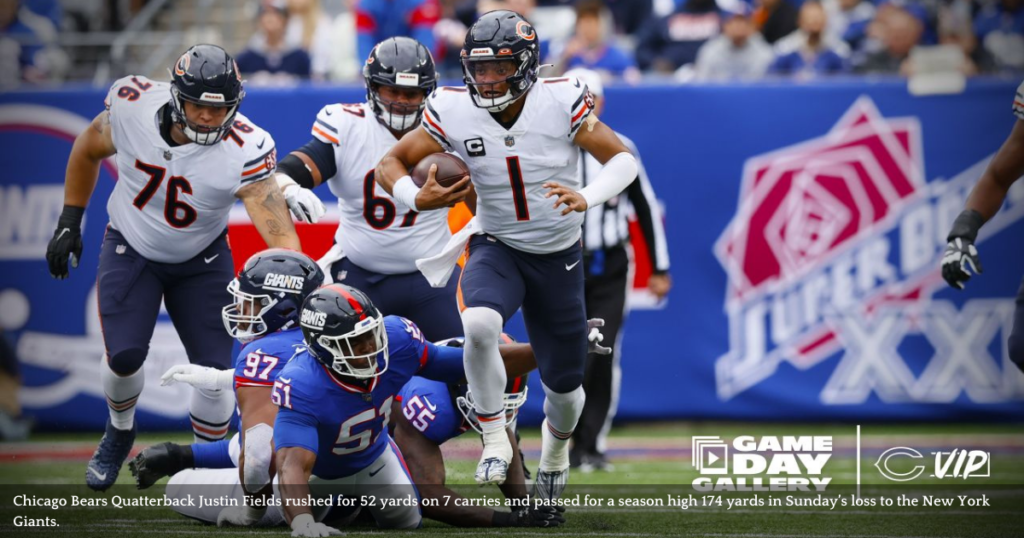 The Chicago Bears would lose their second game of the season with a 20-12 loss to the New York Giants on Sunday, October 2, on the road.

The Bears defense had no answer for the New York Giants running attack after they would give up 2 rushing touchdowns and 68 yards to quarterback Daniel Jones in the loss.

“They were running the boot scheme,” said Chicago Bears head coach Matt Eberflus. “They were pulling guys with that. So it makes it hard on the linebackers in terms of their eyes. I think it was a good scheme.”

In the first quarter, Jones and the New York Giants jumped out to a 7-0 lead after he rushed for an early touchdown against the Bears defense. The Bears defense allowed a total of 333 yards, 262 rushing yards on 5.5 yards per play.

In the second quarter, the Bears defense gave up their second touchdown of the day. Falling behind 14-9 at half time, the team was only able to score three field goals in the first half.

After giving up a 14-9 half-time lead, the Bears managed to score another field goal, trimming the lead to 17-12 to close out the third quarter.

With the Giants leading 20-12, the Bears had a chance to score with 3 seconds left, but time expired in the fourth quarter. The Bears finished Sunday’s game with a 155 yard passing and 149 yards rushing.

With the loss, the Chicago Bears are now 2-2 on the season. Their next game will be played Sunday, October 9, against the Minnesota Vikings. Game time is 12 p.m.