Bears fall to Atlanta Falcons 27-24 on the road 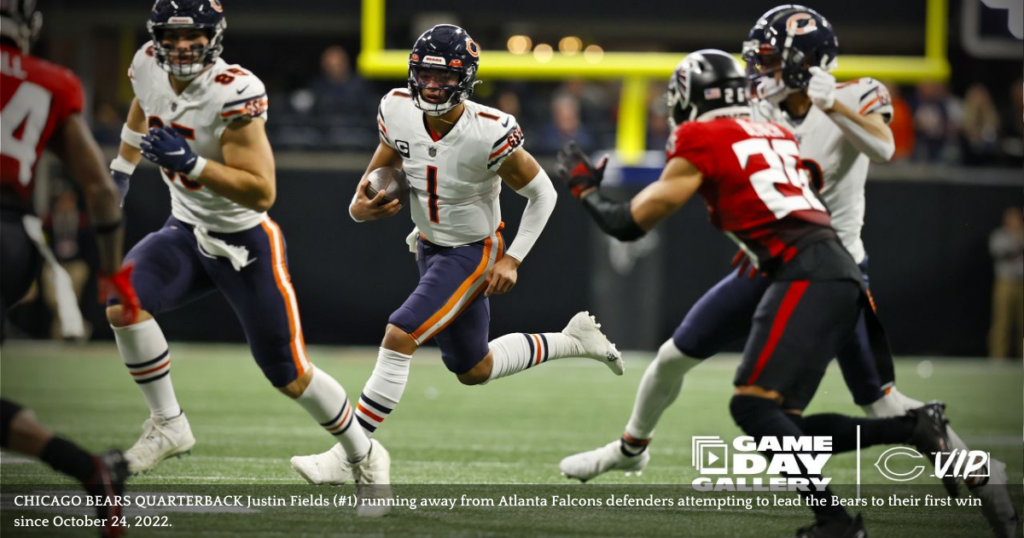 The Chicago Bears are now winless in their last four games after losing 27-24 to the Atlanta Falcons on Sunday, November 20, on the road.

This marked the fifth consecutive game in which the Bears scored 24 points or more. The last time they reached this mark in five straight games was Weeks 12-16 of the 2020 season.

According to the Chicago Bears, quarterback Justin Fields led the team on the ground for a third straight game, finishing with 85 yards and a rushing touchdown on 18 attempts, while also going 14-of-21 for 153 yards and a passing touchdown.

Fields completed a 16-yard pass to wide receiver Darnell Mooney for the Bears’ first touchdown of the day, finishing off a seven-play, 44-yard drive with 6:08 left in the first quarter. The touchdown reception marked the second of the season for Mooney and the 10th of his career.

In addition to the reception by Mooney, Fields scored on a 4-yard touchdown run with 4:35 left in the second quarter, finishing a seven play, 29-yard drive.

The run by Fields was his seventh rushing touchdown of the season and the ninth of his career. He has now rushed for a touchdown in five consecutive games. Those seven rushing touchdowns are tied with Philadelphia’s Jalen Hurts for the most by a quarterback this season.

Running back David Montgomery also found the end zone for the third Chicago touchdown of the afternoon, scoring from two yards out with 8:20 to go in the fourth quarter.

Montgomery’s touchdown is his third rushing score of the season and the 24th of his career. His 24 rushing touchdowns ties Jordan Howard for the ninth-most in Bears’ franchise history. Montgomery finished with 17 rushing attempts on 67 yards in addition to the touchdown, and also caught three passes for a team-high 54 yards. It is his second game this season with over 100 yards from scrimmage.

In spite of a huge game by the Bears’ offense, the Bears’ defense would give up a late game field goal to make the score 27-24. The Bears fell short on their final drive of the game and lost their eighth game of the season.

With the loss, the Bears are now fourth in the NFC North Division.