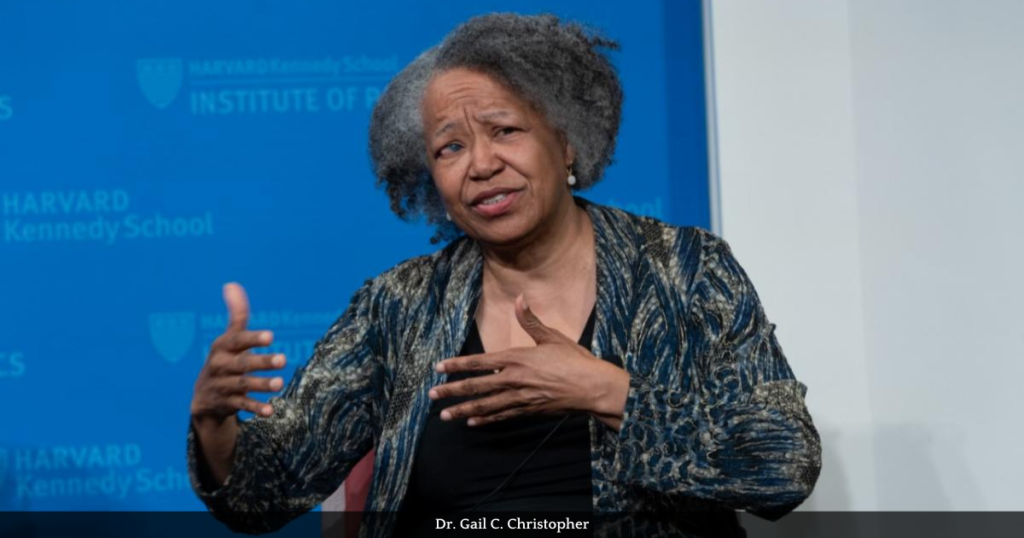 Dr. Gail C. Christopher recently spoke at the Harvard Kennedy School Institute of Politics and positioned Truth, Racial Healing and Transformation (TRHT) as an approach and framework that can help to transform American culture. TRHT, she said, works at the community level to acknowledge the suffering caused by racism in America, and offers a unifying path forward based on truth, healing, and policy change.

Dr. Christopher, a former executive director for the Institute for Government Innovations at the Kennedy School, made her first visit to the Harvard Kennedy School in more than 20 years. One of the nation’s leading voices on racial and health equity, she suggested that the country is not as divided as it may appear.

“The hyperbolic classification of our country as becoming more and more divided was somewhat contradicted by the results of the midterm elections,” she said. “We need to understand that if a democracy is going to work, there has to be not just a critical mass, not just a majority, but a super majority of people who believe in democracy and believe in equal human value. I’m encouraged right now that we are not as far down the road to authoritarianism as some people would’ve had us believe.”

Dr. Christopher said the killings of unarmed Black men and women spurred creation of TRHT. “It was time that America have a truth process,” she said.

“We studied the other (reconciliation) efforts around the world, and we recognized that this had to be different. We had to learn from the critiques of those efforts. And so, we came up with an approach that we called Truth, Racial Healing and Transformation, commonly known as TRHT, with the intention of making sure that it was more than a catharsis.”

TRHT was “more than a call for accountability and forgiveness,” she said, asserting that it can transform American society. The TRHT framework has five major pillars with Narrative Change and Racial Healing/Relationship Building leading the work.

Narrative Change involves understanding that America does not tell the truth about our story. “We don’t own up to our history,” she said. “Narrative Change is a critically important component of the work. We’ve involved the American Library Association and many media (organizations), and we’ve (tried) to change the cultural ethos into one that owns our past, but is committed to forward movement.”

Moreover, Racial Healing/Relationship Building is “the work of bringing us together as human beings,” she said, noting that in the last final breaths, George Floyd called for his mother. “And I believe it was that call that mobilized so many millions of people, because we could all relate to that common humanity,” Dr. Christopher said. “We all have mothers. We all came from mothers. We felt his pain. There was empathy in that moment. And that is what is missing from our society, from our Congress, from our politicization. We use euphemisms instead of facing the truth and learning to be compassionate and having empathy for one another.”

She cited “Rx Racial Healing Circles” as a method of facilitating healing.

“Healing circles are a process where you intentionally bring very diverse people together, people who otherwise might never be in the same room with each other for hours, sharing stories, personal stories in response to specific prompts designed to address fundamental psychological motivational needs,” she said. “Those motivational needs are for a sense of security and safety, a sense of self-expression, and ultimately a sense of agency. They share the stories in pairs before they share them in the circle. They share these stories from their lived experience, but are responding to the same prompt bringing out our common humanity.”

A big part of this work involves reconnecting diverse people in ways that are compassionate and that promote empathy, Dr. Christopher said. “And then when we do that foundational work of narrative and, and the racial healing and the relationship building, you know, (we) have a bridge of trust that’s strong enough to carry the weight of the truth.”

The final three TRHT pillars are Separation, Law and the Economy.

“We look at the structures that have been put in place to maintain racial hierarchy, to maintain the fallacy of a hierarchy of human value. We identified three core avenues of maintaining this false hierarchy,” she said. “The first is through separation, isolation, keeping people apart in structured ways. And there’s so many examples, from redlining to the child welfare system. The fourth pillar is our legal system. Our legal system produces exactly what it was designed to produce, which is gross inequities, incarceration, policies that are unfair, and the inadequate access to voting that is divided racially as well, and immigration policy.”

The final pillar of the framework is The Economy. Dr. Christopher said there is a denial of the truth that our economic system was built on the backs and lands of diverse people. That historic reality must be faced and its consequences must be redressed “So, when we talk about transformation in that Truth, Racial Healing and Transformation framework, that bottom pillar is to transform our systems from inequity.”

TRHT gives people “a chance to hear, see, and feel our common humanity through our shared stories,” Dr. Christopher said, adding that it provides opportunities to actualize a shared commitment to democracy and justice.