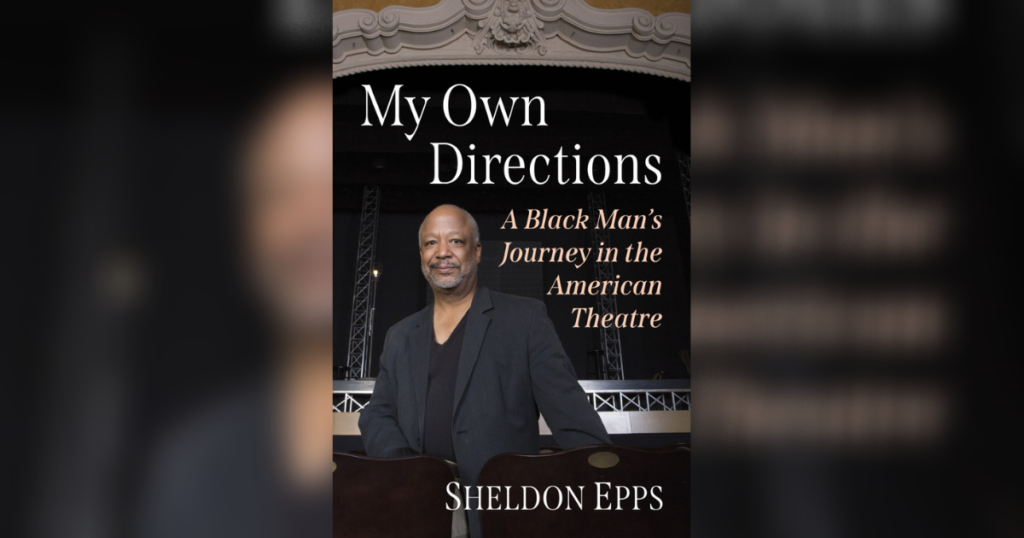 Sheldon Epps has directed major productions on and off Broadway, in London and at many theatres across America. In addition, he has had an active television career helming some of the classic shows of recent years. He was the artistic director of the renowned Pasadena Playhouse for two decades, and currently serves as senior artistic advisor at the historic Ford’s Theatre in Washington, D.C. In “My Own Directions A Black Man’s Journey in the American Theatre,” Epps recounts his rollercoaster ride of a life in the theatre, with all the excitement and occasional anguish that come with the highs and lows. The author’s journey in the American theatre has been amplified by his experience as a Black man who has frequently been “one of the few,” “the first” or even “the only.”

“Working on this memoir has been a reflective journey that has brought back vivid images of moments in my long and blessed career,” said Epps. “It has also been a reminder of the many challenges that have resulted from being ‘chased by race’ personally and professionally. These are still extant issues in the American Theatre that need and require continuing exposure and conversation. I hope that this book contributes to the ongoing evolution of the theatre industry. I look forward to having readers join me on this journey through my life and career.”

Epps’ directing career has been full of rewards and opportunities as well as huge challenges and frustrations, along with the anger that has come from being “chased by race” for so many years. Much of the author’s experience comes from his years as artistic director of Pasadena Playhouse, one of the oldest and well-known theatres in America, and for a time early in his career, one of the whitest.

This is the story of how the author came into leadership at Pasadena Playhouse after a successful career directing on Broadway, in London and all over the world. It relates how the theatre was radically changed and reignited by his leadership, including his insistence on making diversity a priority onstage and off. This is the very personal story of a person who wanted his race to be recognized, but never used it as a reason to be less than fully respected. In many ways, this memoir tells the story of what people of color in America must face repeatedly to make their lives matter.

SHELDON EPPS PICTURED when he was honored as the Artistic Director Emeritus Pasadena Playhouse. (Xavier Higgs Photo).Sheldon Epps conceived and directed the Duke Ellington musical Play On!, which received three Tony Award nominations, and was produced at the Goodman Theatre in Chicago, where it received four Jefferson Awards including Best Musical. The Pasadena Playhouse production was filmed by PBS for broadcast as part of the “Great Performances” series.

He also conceived and directed the highly acclaimed musical revue, Blues in the Night. The Broadway production was nominated for a Tony Award for Best Musical of the Year, and the London production, which he also directed, was nominated for two Laurence Olivier Awards, and ran for over a year on the West End before being broadcast in Europe by Thames Television. His 2018 production of the show in Los Angeles received unanimously positive critical acclaim and set box office records at The Wallis Annenberg Center for the Arts.

Mr. Epps was honored to be the Artistic Director of the renowned Pasadena Playhouse and is widely credited with the rejuvenation and rebirth of that respected theatre company. His directing credits at The Playhouse include the record-breaking production of Fences (starring Laurence Fishburne and Angela Bassett), Kiss Me Kate, Twelve Angry Men, Intimate Apparel, Blues for an Alabama Sky, The Night Is a Child, As Bees In Honey Drown, Blue, Play On!, Les Liaisons Dangereuses, The Importance of Being Earnest, The Old Settler, The Real Thing, On Borrowed Time, among other productions. He inaugurated Hothouse at The Playhouse, the theatre’s hugely successful new play development program. He also co-directed the Broadway production of Baby It’s You!, which was originally produced at The Playhouse. He now continues his association with the theatre as Artistic Director Emeritus.

Under his leadership, The Pasadena Playhouse once again established a reputation for outstanding productions distinguishing themselves in their artistic excellence and theatrical diversity. Among many other honors, he received the NAACP Community Service Award and the prestigious James Irvine Foundation Leadership Award for his many accomplishments during his tenure at The Playhouse.
For television, he has directed episodes of “The Upshaws,” “Family Reunion,” “Frasier,” “Friends,” “The George Lopez Show,” “Everybody Loves Raymond,” “Hannah Montana,” “Instant Mom,” “Evening Shade,” “Sister, Sister,” and many others, as well as several pilots.

He has also taught acting, directing and theatre management at Yale School of Drama, USC, UCLA, University of San Diego, Occidental College, and Cal State LA, among others. He was honored to receive the coveted Alumni Achievement Award from his alma mater Carnegie-Mellon University.

Currently, he is honored to serve as Senior Artistic Advisor at Ford’s Theatre in Washington, D.C.