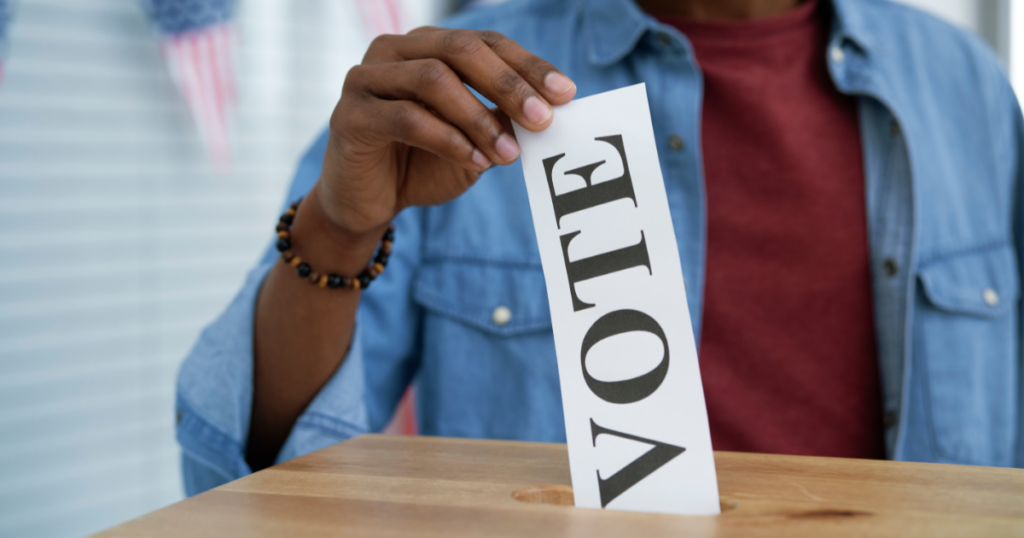 Across Chicago’s South and West sides, canvassers are knocking on doors, chasing after residents at supermarkets, parks and bus stops to obtain signatures and addresses to get a candidate they support on the ballot for the February 28 aldermanic elections in Chicago’s 50 wards.

When voters go to the polls, they won’t see the names of 15 incumbent aldermen who are leaving the City Council amid political divisions that intensified under Mayor Lori Lightfoot.

Their departures will give voters the opportunity to reshape the City Council, but for the city’s Black community, the future of a fragmented Chicago Black Caucus will also be in the hands of voters at the ballot box.

In Chicago’s Black electorate, four Black wards are taking the spotlight following the departures of their aldermen, some of whom have spent decades on the Council.

The openings in those wards (4th, 5th, 6th and 21st) are fueling a surge of political newcomers hitting the pavement for signatures as they seek to join a wide-open field where any candidate can come out on top. The races in those wards are shaping up to be most fields in Chicago’s Black wards.

For the past several weeks, candidates in Black wards have launched their aldermanic campaigns with signature petition drives that began with announcements on social media, including Facebook and Twitter.

Much has been said about the mayoral race in Chicago, and the aldermanic race is getting less attention as voters focus on the General Election on November 8. But not too far behind is the November deadline for aldermanic candidates to submit the required 473 valid signatures to get on the ballot.

Most aldermanic candidates aim to collect three or four times the required amount of signatures in order to survive the challenge round, where opponents seek to invalidate signatures and keep their challengers off the ballot. By the time the Chicago Board of Elections has the official list of aldermanic candidates, voters will be ushering in a new year.

While the candidates scramble to collect signatures for the city’s 2023 municipal elections, the Crusader has compiled a preliminary list of aldermanic candidates after interviews with dozens of voters.

Last month, Alderman Pat Dowell (3rd Ward) announced that this re-election campaign will be her final one after four terms in office. Sources told the Crusader that Dowell had no plans to run for a fifth term after she lost the race for the First Congressional District but changed her mind.

In the 4th Ward, at least four candidates are running to replace Alderman Sophia King, who is running for Chicago mayor. Attorney Ebony Lucas, who ran unsuccessfully against King in the last two aldermanic elections, is running for the third time. State Representative Lamont Robinson (Dist.-5) and Prentice Butler, King’s chief of staff are also candidates. Sources told the Crusader that Hyde Park businessman Jonathan Swain, who ran unsuccessfully to replace Congressman Rush in the First Congressional District, is considering running.

In the 5th Ward, five candidates seek to replace longtime Alderman Leslie Hairston, who is retiring after 24 years in office. They include Gabriel Piedmonte, a former Hyde Park Herald editor who served as William Calloway’s campaign aide after finishing third in the 2019 Primary. The other candidate, Wallace E. Goode, Jr., is retiring as executive director of the Hyde Park Chamber of Commerce. Also running is South Shore businessman Kris Levy; urban policy administrator, Joycelyn Hare; Adrienne Irmer, a public policy administrator and daughter of Perri Irmer, president and CEO of the DuSable Black Museum and Education Center.

Dr. Bunville, who works in technology for the Chicago Police Department and is a therapist, will make an official public announcement October 2 at Josephine’s Southern Cooking restaurant in Chatham.

During the city’s remap process, the 21st Ward expanded to include the former 34th Ward, where Attorney Preston Brown ran against outgoing Alderman Carrie Austin. Brown, who still serves as 34th Ward committeeman, ran twice against Austin and took nearly 46 percent of the vote in the 2019 city election.

Brown is running again to replace Howard Brookins, but he faces community organizer Ronnie Mosley who announced his campaign last month. Brookins and several officials have endorsed Mosley, but endorsements from the political establishment haven’t proven effective among progressive Black voters who have grown disillusioned with the city’s status quo.

Several sources told the Crusader that at least 15 candidates will run for the aldermanic seat in the 21st Ward. The Crusader has confirmed two.

One potential candidate, insurance businessman Joseph Ziegler, Jr., may run a third time in the 21st Ward, but may opt to run in the 18th Ward after his residency was moved after the 21st Ward was remapped.

In the 24th Ward, at least two candidates are challenging Alderman Monique Scott, the sister of former Alderman Michael Scott who was appointed last June by Lightfoot. They include Larry Nelson and Vetress Boyce.

Nelson is a staffer for Congressman Danny K. Davis. Boyce is the owner of Boyce Enterprise Beauty Supply Store. Both Nelson and Boyce were among 19 candidates who applied to replace Alderman Scott when he abruptly resigned in May.

Monique Scott is running for a second term after serving out her brother’s term in office. On July 25, Monique received a campaign donation of $59,990 from her brother Michael, according to records filed with the Illinois State Board of Elections.

In the 20th Ward, Alderman Jeanette Taylor faces a growing list of candidates as she seeks a second term in office.

Parkway Gardens community activist Jennifer Maddox confirmed that she is running again following an unsuccessful 2019 bid to win the seat after former Alderman Willie Cochran pleaded guilty in federal court to one count of wire fraud for misusing campaign funds for gambling and other personal expenses.

Sources told the Crusader that Andre Smith is running again after three unsuccessful campaigns in the 2019, 2015 and 2011 city elections. Newcomer Lavell Short, Jr., an activist and educator, also seeks to unseat Taylor.

In the 7th Ward, Alderman Greg Mitchell faces challenger Jocilyn Floyd, a mediator who represented four Black women entrepreneurs who last year accused Mitchell of not allowing them to open businesses in the ward. Two women have prevailed, opening a day-care center and a cigar business.

The 7th Ward includes the portion of South Shore south of 71st St. and along lush South Lake Shore Drive. But in a brief interview with the Crusader, Floyd said “South Shore is not what it used to be and is still declining under the leadership of the 7th Ward. It’s time for change.”

In the 8th Ward, Michelle Harris is being challenged again by tax professional Linda Hudson and Sean Flynn, who served as Alderman David Moore’s chief of staff.

In the 9th Ward, Alderman Anthony Beale faces challenger Cleopatra Draper in a rematch of the 2019 election.

In the 16th Ward, Alderman Stephanie Coleman seeks a second term against Dr. Carolynn Crump, a security officer with the Chicago Park District.

In the 37th Ward, Alderman Emma Mitts seeks a sixth term against West Side activist Corey Braddock and activist Howard Ray, whose brother died in the E2 Nightclub stampede in 2003.