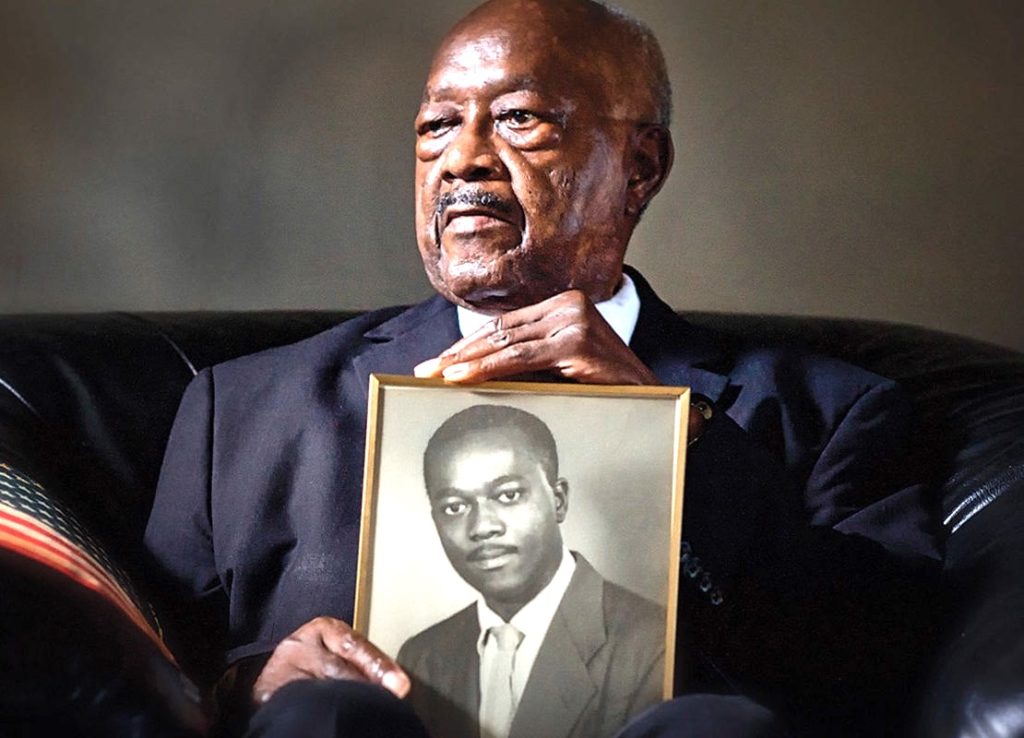 He gets around in a wheelchair. He’s totally blind in his left eye. He’s had several eye operations and is a prostate cancer survivor.

Today, age is Abraham Bolden’s worst enemy. He has outlived two of his children, but he keeps on going. But more than 50 years after an injustice locked up the nation’s first Black White House Secret Service agent, Bolden is running out of time to win the biggest battle of his life.

Aging and riddled with health problems, a criminal conviction threatens to forever damage his legacy and place in Black history. For decades he has fought a losing battle to clear his name as one president after another passed in pardoning him for a crime that continues to haunt him to this day.

In 1960, Bolden became a member of the United States Secret Service. The next year President John F. Kennedy tapped him as his secret service agent whose responsibility was to protect the commander-in-chief. In 1961, he was given a temporary assignment to guard President Kennedy during an event with Mayor Richard J. Daley at Chicago’s McCormick Place. Impressed with his work, President Kennedy on April 28, 1961, invited Bolden to join his White House detail as the first Black to protect the president.

It was the first time in American history that a Black man had been given the job. It was also at a time when the Civil Rights Movement had yet to gain momentum, after Blacks helped Kennedy into office as the nation’s youngest president.

Inside Bolden’s home in Auburn Gresham sits many photos, proclamations, awards and certificates from a lifetime of achievements. Many recognize his work as a secret service agent. There’s a photo of him with President Kennedy, his wife Jacqueline and White House staff members.

Bolden lived in this same home when he served on Kennedy’s security detail. He commuted to Washington, D.C., and stayed at hotels there during important events at the White House. After earning a degree from Lincoln University and serving as a member of the Illinois State Police, his Secret Service job was one that Bolden believed would lead to political positions as a diplomat or ambassador to Ghana. But Bolden’s big dreams ended after he was embroiled in a criminal case that changed his life forever.

On May 12, 1964, Bolden was accused of and charged with attempting to sell a secret government file to Joseph Spagnoli, Jr., in exchange for $50,000. Spagnoli was named as the head of a counterfeiting ring.

Days after his arrest, Bolden called a press conference at his home in Auburn Gresham to publicly accuse the government of trying to frame him. During a hearing with the Warren Commission investigating the assassination of President Kennedy, Bolden testified that the president’s agents drank heavily before and after tours of his summer home in Hyannis Port, Massachusetts.

He also said some reported to work half-drunk and used Secret Service cars to take women to bars. Bolden said he reported the incidents, but nothing happened. In addition, Bolden alleged that fellow agents subjected him to racist acts when he began working for the Secret Service. The most explosive allegation was that agents suppressed information that detailed a Chicago plot to assassinate President Kennedy.

Federal authorities have denied the accusations and said there was no truth to misconduct in the Secret Service. They also denied the allegations of a coverup to assassinate President Kennedy.

Bolden documented his experiences in his 2008 memoir, The Echo from Dealey Plaza: The true story of the first African American on the White House Secret Service detail and his quest for justice after the assassination of JFK. The book’s title is a reference to the site in Dallas where President Kennedy was assassinated in 1963.

In July, 1964, Bolden’s first trial ended in a hung jury after the only Black juror refused to find him guilty. Prosecutors tried Bolden again in a second trial the following month.  This time he was found guilty of accepting a bribe and sentenced to six years in prison. He was also fired from the Secret Service that same month.

At his own trial in January 1965, Spagnoli, the man from whom he was accused of soliciting bribes, admitted that federal prosecutors had asked him to lie about the case. Bolden quickly appealed and requested a new trial. He was denied and began serving a six-year sentence in 1966.

Bolden eventually served over three years in prison and was paroled, after which time he served two and a half years of probation.

Today, Bolden is free man. But 57 years after he was found guilty, the conviction remains on his record. He found a friend in Roosevelt Wilson, a retired educator, who contacted Bolden in 1967 after learning about his case. Since then, Wilson has helped filed pardon papers for Bolden under the administrations of Presidents Bill Clinton, George W. Bush and Barack Obama. He said none of them have responded. He even submitted pardon papers to former President Donald Trump, knowing that his chances were slim with the Republican leader. None of the attempts were successful.

Wilson said he also contacted members of the Congressional Black Caucus in Washington and other Black elected officials. Still no response.

“I’m just shocked at the half-hearted efforts of our legislators,” Wilson said. “It’s appalling to me. This man has been a scapegoat. Abraham Bolden is an innocent man. There was never a crime. They created a crime to shut him up. The evidence on his behalf is just amazing.”

Bolden said his hopes were the highest when Obama was elected as the nation’s first Black president in 2008. He said in addition to filing his pardon papers with the U.S. Department of Justice, he never heard back from Obama.

“It was very disappointing to me that I never heard back from President Obama. I couldn’t believe it. That was so shocking and disappointing. I almost gave up, but I didn’t. “I thought he would understand what I had gone through.”

Congressman Danny K. Davis has agreed to help with the effort to get Bolden pardoned by President Joe Biden.

“I will get the information to the pardon attorney and to the president,” Davis told the Crusader. “Mr. Bolden’s conviction always seemed suspicious, so the effort to get him pardoned is something that I agree with, and it’s such a good thing to do.”

At 86, time is not on Bolden’s side. He recently visited the doctor for cataract surgery in his left eye, which occasionally fills up with blood. He’s blind in that eye, but Bolden said one doctor believes that he has a chance of getting his sight restored. Bolden is also afflicted with scoliosis of the spine and is unable to walk on his own. With a C-curved spine, he relies on a wheelchair to get around his house.

Many years ago, he was also diagnosed with prostate cancer. After many treatments, he survived the disease, but his son Abraham Bolden, Jr., 61, died last August and his daughter Ahvia Reynolds died two months later at 63. Both had cancer. His only surviving child, Dr. Daaim Shabazz, 58 is a professor at Florida A&M University.

Wilson said he and Bolden had a goal of getting him pardoned by April 28, 2021, to mark the 60th anniversary of Bolden’s historic appointment to serve as a Secret Service agent to protect President Kennedy. But with Bolden’s age and health challenges, the goal now is to get him pardoned before he leaves this world.

Bolden still believes he will one day be pardoned.

“Everything happens for a reason. There is a God. They did not wreck my life. I wanted to find the truth. I learned a lot from it, and I would do it again.”