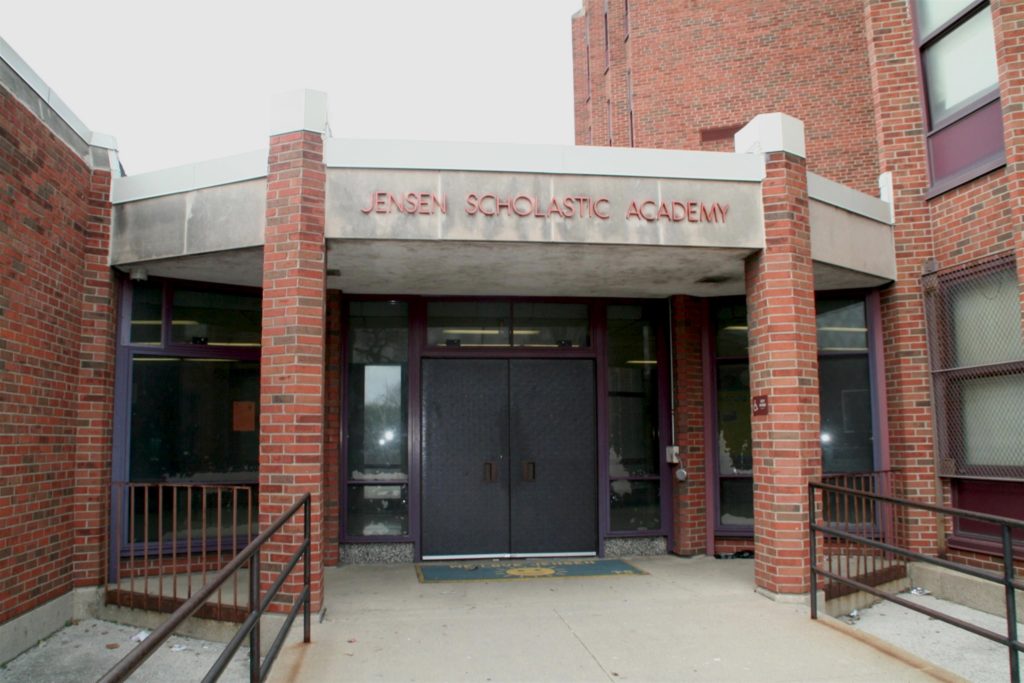 A week after parents held a rally to demand action and answers following the death of two parents with students at a West Side elementary school, Chicago Public Schools CEO Pedro Martinez announced a shorter quarantine period for unvaccinated students or staff members on October 5, 2021.

CPS reduced the number of days an unvaccinated student or staff member needs to quarantine from 14 to 10 days. This change comes as both city and school officials say the number of positive cases traceable to schools are low, although Martinez acknowledged more contact tracing and screening programs are needed in more of the schools in the District.

On Tuesday, September 28, a large crowd listened to parents during a rally outside Jensen Elementary, 3030 W. Harrison St. Activists at Jensen Scholastic Academy Elementary School on the West Side are demanding that the building be shut down and deep cleaned after the deaths of two parents from COVID-19, and eight confirmed cases.

But as parents hold a string of rallies at the school, Chicago’s top doctor says that there is no evidence that links the parents’ deaths to in-school transmission. But parents at Jensen remain worried and skeptical.

“We are demanding a shut down, we are demanding that CPS do something. We are going to demand action until something is done,” said Jermaine Thomas, a member of the Local School Council.

“Why do we have to keep repeating ourselves over and over?” asked Shauntee Colston, a father who spoke outside the school with his daughter, Saraiah. “Close the school. Deep clean the school. I want my daughter to come home from school, safely.”

Arielle Chestleigh, another parent at Jensen, told the Crusader, “We don’t receive any direct information from CPS or specifics from the school. It’s helpful to know what’s going on.”

Parents grew concerned when Shenitha Curry, 44, died September 23. Her family believes she got the virus from her daughter, a fifth-grade student at Jensen who had been in quarantine. Curry was not vaccinated, but her sister places the blame squarely on CPS.

“If my sister had to live three blocks west of where we are standing right now, and crossed over into Oak Park, it would be different,” said Jasyma Johnson, Curry’s sister. “Because they have different safety protocols, different safety measures in place.”

The name of the other parent who reportedly died from COVID-19 has not been released. But the Chicago Teachers Union reported that she is a 32-year-old woman, who died one day after Curry. She complained bitterly on Facebook that she believed she was infected by the school. She said she was never contacted by a contact tracer. Within a week she was dead.

Jensen is a small school with just under 300 students. It has had at least eight confirmed COVID cases since the start of the school year. Until September 27, 11 of the school’s 17 classrooms were quarantined. Most are now back in class, and on the day of the rally, September 28, staff from Lurie Children’s Hospital were on hand to administer COVID tests to students and staff who requested it.

The CTU is demanding an enforceable safety agreement with CPS that provides for weekly universal testing, contact tracing turnarounds of 24 hours, robust school-based vaccination programs, and adequate staffing to support the needs of students traumatized by the harsh consequences of the pandemic, an epidemic of violence in the city, and the struggles of neighborhoods starved of civic resources for decades.

As of September 26, the district had confirmed eight COVID-19 cases among students and staff at Jensen, including some siblings and exposures that had been traced to events outside the school. More than 200 students or staff at the school have been identified as “close contacts” of someone who tested positive for COVID-19.

On September 28, Chicago Department of Public Health Chief Dr. Allison Arwady called the deaths of the mothers tragic. She said an investigation showed there was no evidence so far to connect the cases to in-school transmission. She said so far, evidence shows that administrators had followed protocols set by the District when cases are reported.

The Chicago Department of Public Health has not released those findings as of Crusader press time on Wednesday, October 13.

Among 341,000 students, Chicago Public Schools contact tracers have confirmed 200 “actionable” cases among adults and 595 cases among students since the start of school, according to District data.