Home Chicago Aaliyah’s Mother Slams ‘Surviving R. Kelly’ Doc: ‘This Will Not Be Tolerated’
Share on Facebook
Tweet on Twitter
“These lies and fabrications cannot be tolerated and allowed to be spewed from the forked tongues of saboteurs of Aaliyah’s legacy,” she said in a statement.
By Keyaira Boone, Huffington Post

In a preview released Wednesday, Cunningham claims that she saw R. Kelly and his then-underage protege having sex on a tour bus. She said that because the space on a tour bus is limited there is little opportunity for privacy, leading her to witness their alleged sexual contact.

“So it just so happened we were all laying in our bunks and the curtains are open, everybody’s communicating, laughing…When the [room] door flew open on the bus. Robert was having sex with Aaliyah,” she claimed.

Haughton released a statement late Wednesday, claiming that Cunningham’s comments could not possibly be true because she and husband were always present. 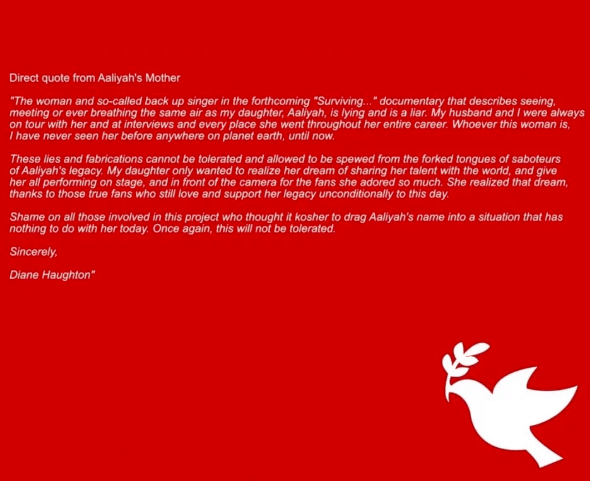 “The woman and so-called back up singer in the forthcoming Surviving… documentary that describes seeing, meeting or ever breathing the same air as my daughter, Aaliyah, is lying and a liar,” the statement began. “My husband and I were always on tour with her and at interviews and every place she went throughout her entire career. Whoever this woman is, I have never seen her before anywhere on planet earth, until now.”

“These lies and fabrications cannot be tolerated and allowed to be spewed from the forked tongues of saboteurs of Aaliyah’s legacy,” Haughton continued.

Aaliyah’s mother also hinted at taking legal action against those she perceives as actively sullying her daughter’s name.

“Shame on all those involved in this project who thought it kosher to drag Aaliyah’s name into a situation that has nothing to do with her today. Once again this will not be tolerated,” the statement concluded.

R. Kelly, now 51, has long denied reports that he and Aaliyah were ever married. In 2016, the R&B singer told GQ magazine that the two were “best friends” and that he “will never have that conversation with anyone.”

Along with recounting R. Kelly’s long-rumored relationship with the late Aaliyah,Surviving R. Kelly also includes more than 50 interviews with Kelly’s victims, former associates, and family members, who openly discuss the singer’s alleged sexual misconduct, which he has continuously denied.

This article originally appeared in Essence.

Free Screening in Englewood for “Cooked: Survival By Zip Code”

Do you have a Medicare Advantage Plan?